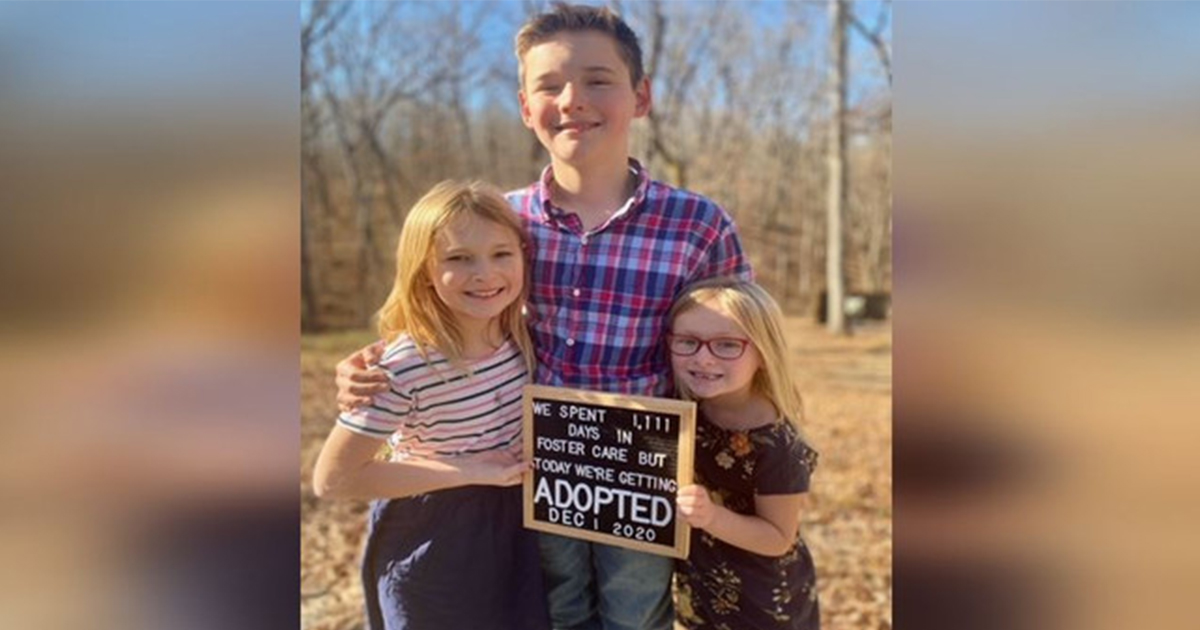 For some of us, childhood is a joyous time, a period in our lives where we’re nurtured and raised in love and care by our parents.

Sadly, of course, not every child experiences the warmth and comfort of a loving family. Some find themselves products of broken homes. Some don’t even have homes to call their own.

Three siblings from Howard County, Missouri know exactly what it’s like to sit in that latter category. Colby, Charly and Roxy have been in foster care for over three years – 1,111 days to be exact – so you can imagine their sheer delight at finally having found their forever home.

Their journey to that special place began when they were fostered by Josh and Brittany McCaskey through the Coyote Hill Christian Children’s Home.

Neither Josh or Brittany had considered adoption in the beginning, but after fostering 11-year-old Colby and his two younger sisters, an inevitable picture began to present itself.

“They became our children over time and we became really close with them. When they went to adoption we just could not see letting them go somewhere else,” the couple said.

An incredible 1,111 days after they entered foster care, the three siblings were adopted and officially became McCaskeys.

“We went from hanging out with just us on days off and can pretty much just go wherever to having three kids,” Brittany explained.

“Charly is growing so much and so fast and she’s so funny!” the new mom said.

As for Colby, it’s all: “Football, baseball, gymnastics, jujitsu, taekwondo.”

Roxy, meanwhile, has her sights set on an altogether different line of work when she grows up. “I want to be a cosmetologist when I grow up because I’m really good at makeup, nails and hair.”

I don’t know about you, but it warms my heart to know that three children who would have otherwise remained in foster care now have a loving home to call their own.

Thank you, Josh and Brittany, for making their dream a reality.

What a wonderfully touching story. The world could do with a little more cheer like this in my opinion.