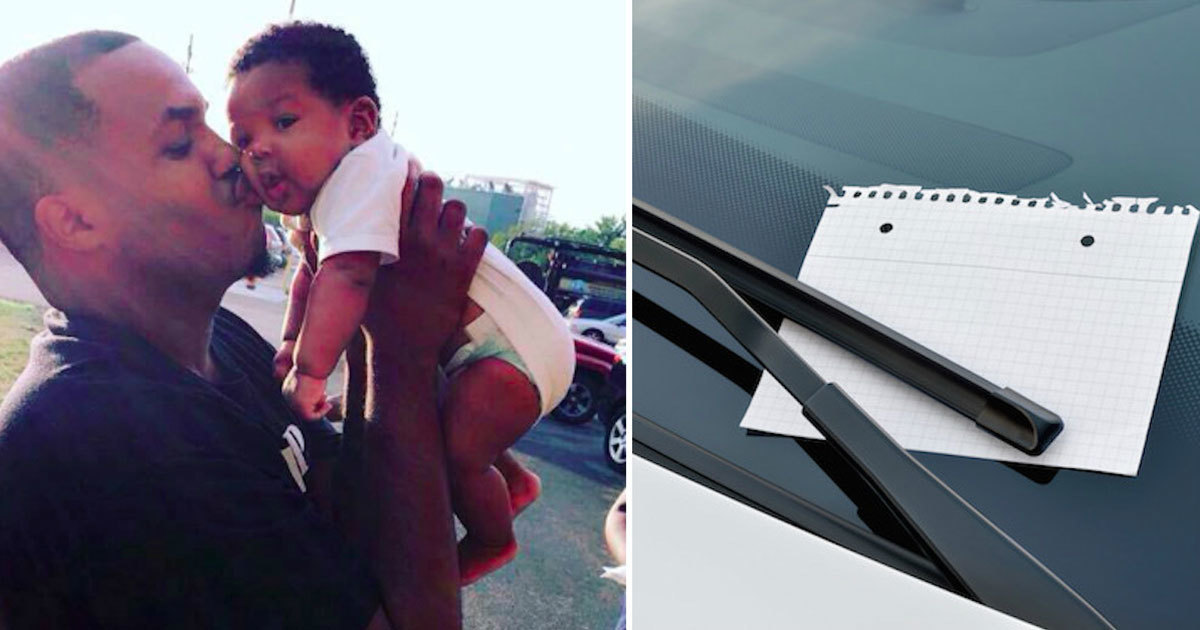 We’re constantly surrounded by dark and unplesant news, whether about war, misery, crime or other issues.

That’s largely why it’s so uplifting to read something positive – especially simple stories where one individual does something kind, generous, or compassionate for another – without the other expecting anything back.

While it feels like such occurences are becoming increasingly rare, the fact is that there are still good and kind folk everywhere. And recently, one dad and his young son discovered that – the easy way.

Kevon Smith. Sr. was sitting in a restaurant in Willoughby, Ohio, enjoying breakfast with his three-month-old son.

Suddenly, he noticed an old couple staring intently at them through the window.

Kevon was confused and wondered what was going on.

Then, when he and his son later left the restaurant, he was even more confused. There, on his car’s windshield, he discovered a folded, handwritten note.

Kevon opened the note and discovered what it said: “Today your meal is on my wife and me. Enjoy that baby boy as long as God intends. Keep doing what you’re doing. The Masons.”

Enclosed with the note were bills, intended to pay for Kevon and his son’s restaurant visit.

The elderly couple obviously were moved by Kevon’s simple, but honest display of fatherhood. Kevon, was, of course, caught off guard with the note and kind gesture. Kevon had himself grown without a dad, and had decided that his son was the most important thing in his life. The incident had an even more profound impact on him.

Kevon added that he plans to pay it forward by doing something kind for another stranger. When his son gets older he will also remember to tell him this story – as a timeless example of what a simple, kind gesture can do.

Wouldn’t it be nice if we all, at some point or another, also make a small but meaningful gesture toward a stranger? This story has certainly inspired me to and that’s why I’m sharing it so more people can also be inspired to do something nice for others. If you agree, feel free to share this article with your friends!