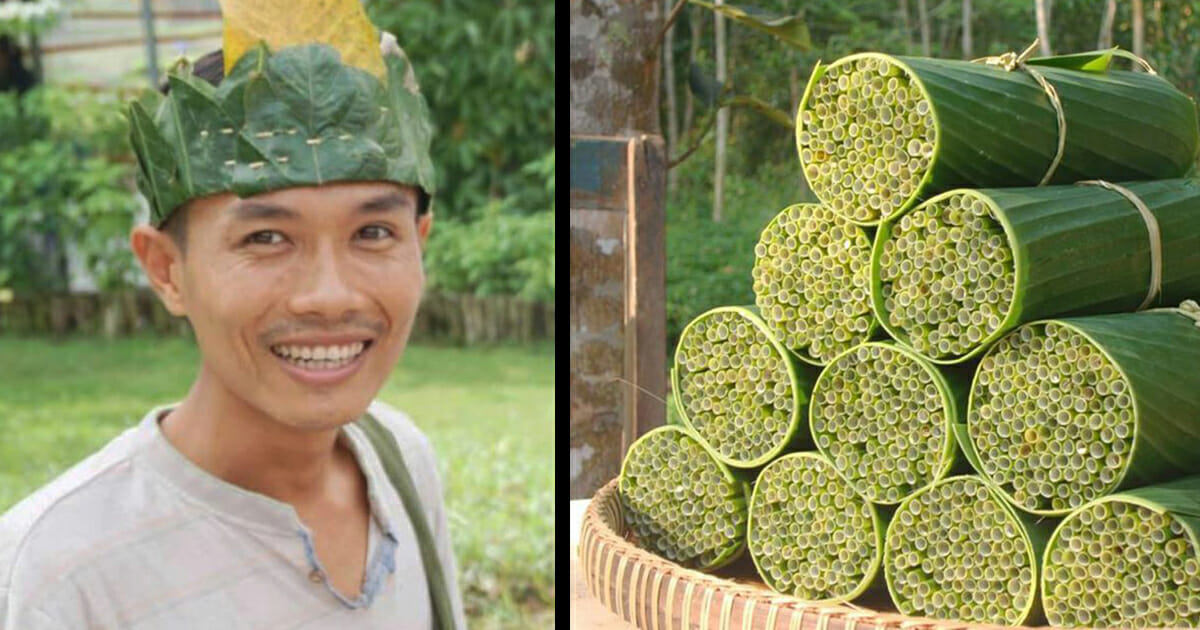 Plastic is a problem.

Of all the environmental issues threatening to ruin our planet, it’s perhaps plastic that poses the biggest challenge. Each year, an incomprehensible eight million tons of plastic finds its way into the world’s oceans, and the damage it wreaks there is terrible.

When it comes to plastic, straws have been a major culprit. It’s estimated the United States alone uses and then discards around 500 million plastic straws every day. That’s 500 million straws, the majority of which are not biodegradable, and will live long lives that pose a danger to all wildlife.

Not only that, but when they do eventually begin to break down, they release harmful toxins that pollute the environment and cause nothing but trouble.

Fortunately, the harmful effects of plastic are know being taught to us all, and change is on the horizon. A war is being raged against plastic straws, and leading the charge are people like Tran Minh Tien, who has found an ideal alternative to plastic that’s biodegradable.

Tran Minh Tien, who is Vietnamese, started an innovation that converts a certain type of grass named Lepironia articulata into drinking straws. It’s early days yet, but the concept has proven hugely popular.

In a video posted to Facebook, Tran Minh Tien, owner of Ong Hut Co., explained the process behind turning the grass into straws that are every bit as reliable as their plastic counterparts.

First, they collect hollow stems of the grass, before washing them and cutting them into 20-centimeter lengths. Using a metal rod, they clean the inside of the tubes, bundle them all together and wrap them in banana leaves.

Now, since we’re dealing with all-natural components, they do have a shelf-life. The straws come either fresh or dried, with the fresh ones able to be kept at room temperature for a week (or in a refrigerator for two weeks) and the dry ones lasting much longer – they can be fine for up to six months.

The straws can be used multiple times at home, and are cheap to buy (4.3 cents for a dried one, 2.6 cents for a fresh one).

If Tran Minh Tien’s Facebook video is anything to go by, there’s certainly plenty of interest in the straws. His informative clip has garnered some 2.1 million views and has been shared over 35,000 times, with social media aglow with positive feedback for Tran Minh Tien’s efforts.

At the moment, these grass straws are only available in Vietnam, but I’m sure I’m not alone in hoping they migrate around the world. I mean, what’s not to like about cheap straws that are biodegradable and absolutely non-harmful to the planet?

See more on this invention in the video below:

Tran Minh Tien, you’re a stand-up citizen of the world!

Please share this article to spread some positive news today. Together, we can save the planet before it gets too late!