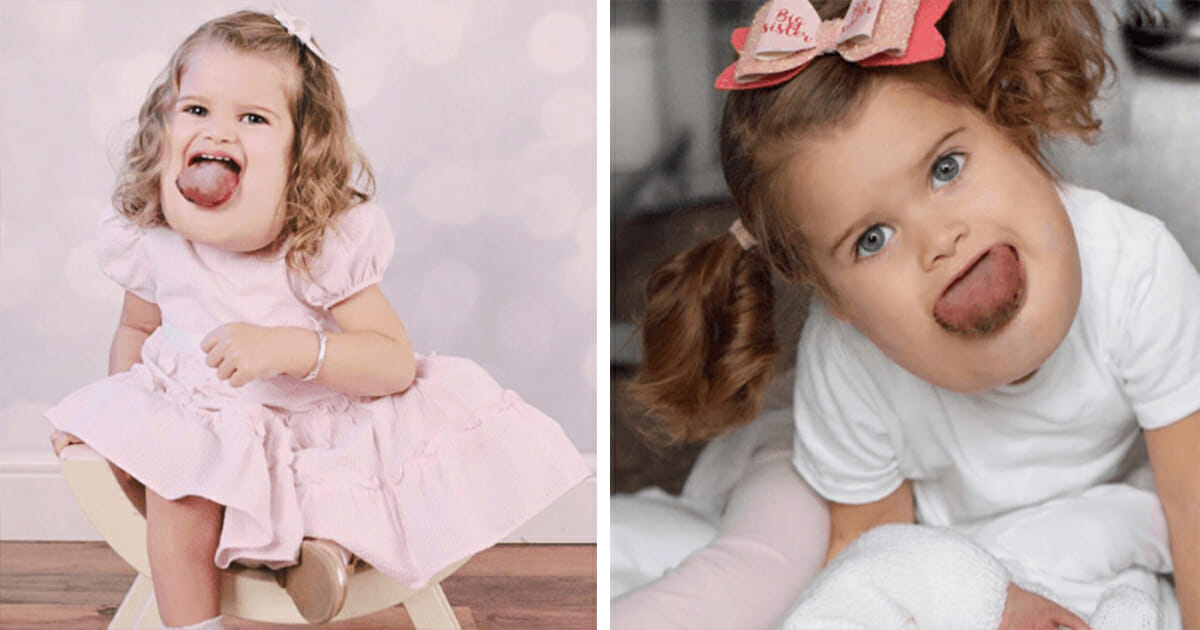 I thank the Lord every day that my children were all born perfectly healthy.

Of course, I know not every parent is so lucky. Whilst there can be no doubting new moms and dads (for the most part) love their newborn children unconditionally, things can be made significantly harder when their little boy or girl is unfortunate enough to suffer from a condition or medical issue.

Eden Sue was born with cystic hygroma, a condition wherein one cyst, or a group of cysts, are found mostly in the neck. Their existence owes to a flaw in the development of lymph sacs and lymph vessels during pregnancy, and can pose big problems.

The condition is so serious, in fact, that the parents of Eden were told she wouldn’t survive longer than a day.

Oh my heart ?? — I just love looking at photos of our newborn Eden. There was so many photos from when Eden was born that we never shared with anyone. Not because I wanted to hide her away, but because I didn’t know how people would react. I was adjusting to a new life with not just a newborn, but a newborn with a serious medical condition. I would often hide her neck in photos and would never leave the house without a big bib. All we wanted to do was protect her from looks & stares, and tried to live a life as normal as possible. ⠀⠀⠀⠀⠀⠀⠀⠀⠀⠀⠀⠀ ⠀⠀⠀⠀⠀⠀⠀⠀⠀⠀⠀⠀ I sometimes look back at those first few months of Eden’s life and struggle with guilt. I always say how a part of me would like to go back. To relive those early weeks and months with hindsight. Just to live them and enjoy them and not be frightened of her condition. It’s only when I look back at these moments when I realise-her strength through it all is what gave us the strength to be so brave ❤️ #foreverproud #cystichygroma #lmawareness #lymphaticmalformation

The Children’s Hospital at Vanderbilt explain cystic hygroma in the following terms: “By the end of the fifth week of pregnancy, the baby’s lymphatic tissues form as lymph sacs. The first to appear serve the chest, arms, neck, and head. They sprout a network of channels called lymphatic vessels that maintain fluid in the baby’s body and carry fats and immune system cells. When a problem occurs between the veins and developing lymph sacs, the sacs expand with fluid and partially or completely block this vessel system.”

Needless to say, Taylor and Chelsea Jones were filled with worry when their daughter Eden was born. Doctors advised them to expect the worst: it wasn’t likely Eden would live past a day.

Its the little things ? ✨ The excitiment on Eden’s little face because she gets to take her lunch bag to Nursery and stay for lunch for the first time ?. She’s such an independent lil thing ?

Chelsea wrote a blog on her daughter’s birth for Love What Matters. In it, she described the events leading up to her birth, and how her life changed after it.

‘The growth is very large and there’s a chance the baby may not survive.’ The only words engraved into my mind that morning. ‘But as long as the baby was inside me, she was fine because I was breathing for her.’

“My unborn baby had a cystic hygroma; the large cysts were compressing her airways, which could have led to potentially fatal breathing problems at birth. The only way to try and get her out safely was through a C-Section in a room full of doctors, Pediatric Ear, Nose and Throat (ENT) surgeons, and NICU nurses.”

“It was decided they would deliver Eden at 39 weeks (a week before my official due date). The night before she came, we were up late. I was so anxious. I cried so many times that night, I was so scared of the unknown. How could I be excited when I didn’t know what was going to happen to our baby?

“I felt a whirlwind of emotions, I was SO excited but more fearful. Will she survive? Will she be breathing? Will I get to see her before they take her? There were so many things going through my mind it was impossible for me to go back to sleep. So, I got out of bed and got ready for one of the biggest and most important days of my life.”

“Taylor was too shaky to drive us to the hospital; neither of us was in the right frame of mind. So Taylor’s mother and sister took us. I was given an IV, and they put monitors on my belly to observe the baby. It was strange, sitting there just the two of us, waiting to be rolled back to the operating room. We managed a few nervous smiles and laughs.

“We kept talking and wishing that we’d soon be a family and that our baby girl would be okay. I wasn’t nervous at this point. I tried to switch off from what was happening, otherwise, I would have gone into complete frantic mode. I don’t think it had quite hit me yet. Just before 10 AM, the OB-GYN came in to check Eden was still breech. She asked if I had any questions. Of course, I had a million of them, but I didn’t ask one.”

#throwback just because I need these newborn smiles on my feed. Almost 2 years since Eden’s first ever treatment at @greatormondst and she had already beat the odds ?. . . . . #preciousmoments #lmwarrior #lymphaticmalformation #cystichygroma #lmawareness #greatormondstreet #greatormondstreethospital #momentsofmine

What happened next, Chelsea described as a ‘miracle’. Eden’s transition to the world was a smooth one. What’s more, she began to cry.

“I heard the most beautiful loud cries!” Chelsea wrote. “I can’t even tell you what I felt at this moment in time, everyone was in complete shock. Our baby was here, AND she was crying, just like some miracle. No one was expecting it and even some nurses began to cry with us. I was in complete disbelief, it all felt so surreal. I have never felt a flood of joy like I did that moment we heard our daughter cry. Something we were told was unlikely going to happen, even though I spent 9 months praying it would.”

“The weeks that followed were long and slow, and at 7 weeks old Eden was admitted into Noah’s Ark Children’s Hospital, where we spent nearly a month. We did our very best to get her home. We fought medical teams and proved our worth. We learned how to care for our daughter beyond the requirements of any parent. We were medically trained. We knew more than some doctors did about her condition, about her cystic hygroma.

“All we knew were hospital walls, MRI scans, and car journeys. I cried every day. We couldn’t have gotten through that time without our family visiting every day. We loved her so much then, as we do now. So much has changed. She came home, and it was a miracle. She defied odds. She proved people wrong. She got rid of tubes and wires like they were nothing at all. We never expected it, but she DID IT,”

Day 2 & still smiling. It makes my heart happy that she’s so happy going to school. Keep it up girl ? @clarkskids #myveryfirstschoolshoes

These days, Chelsea continues to update the world on her daughter’s progress. Eden is a healthy, happy, adorable 3-year-old, and she’s still defying the odds laid before her.

????? ??????? ? — A lazy day getting our home in order today ?. So much to do but also lots of fun to be had. Every day could be a pyjama day when pyjamas are this cute? @theirnibs #lazyday #cutepyjamas #newhome

We’re wishing Eden and her family all the very best moving forward!

Share this article if you, too, want to wish Eden well.