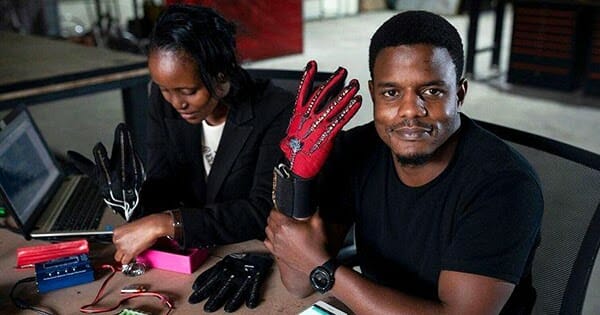 The vast majority take our senses for granted. The ability to see and hear and smell and taste is a given for us who have been gifted it since birth, but others don’t have it so easy.

Every day, babies around the world are born without the ability to hear. Sign language exists to make it simpler for deaf people to communicate, but one engineer, 25-year-old Roy Allela, is aiming to take things a step further.

The inventor, from Kenya, has invented the Sign-IO gloves, designed to translate signed hand movements into audible speech. The result? Deaf people can “talk” to those who don’t understand sign.

Roy Allela’s six-year-old niece was born deaf. She found it difficult to communicate with her family, none of whom knew sign language.

According to reports, the gloves have sensors mounted on each of the five fingers. They determine its movements, down even to the detail of how much a finger is bent. The gloves are simultaneously connected to an Android app that Allela also invented, one that converts gestures into vocal speech through a text-to-speech function.

It was Allela’s 6-year-old niece who inspired him to create the Sign-IO gloves. She was born deaf, and he so he wanted to create a simpler way for her to communicate with people around her.

In an interview with The Guardian he said:  “My niece wears the gloves, pairs them to her phone or mine, then starts signing and I’m able to understand what she’s saying. Like all sign language users, she’s very good at lip reading, so she doesn’t need me to sign back.”

Allela, who also works for Intel and teaches data science at Oxford University, launched his gloves at a special needs school in a small county in south-west Kenya. His aim, however, is for the gloves to be available for all who need them.

Whilst they’re still in the prototype phase of development, the Sign-IO gloves have already received awards and prize funds to help with their continued development. The future looks promising indeed!

Well, Roy, it may be early days yet, but we’re thankful for all your impressive work to date!

Share this story to pay tribute to this incredible young man!