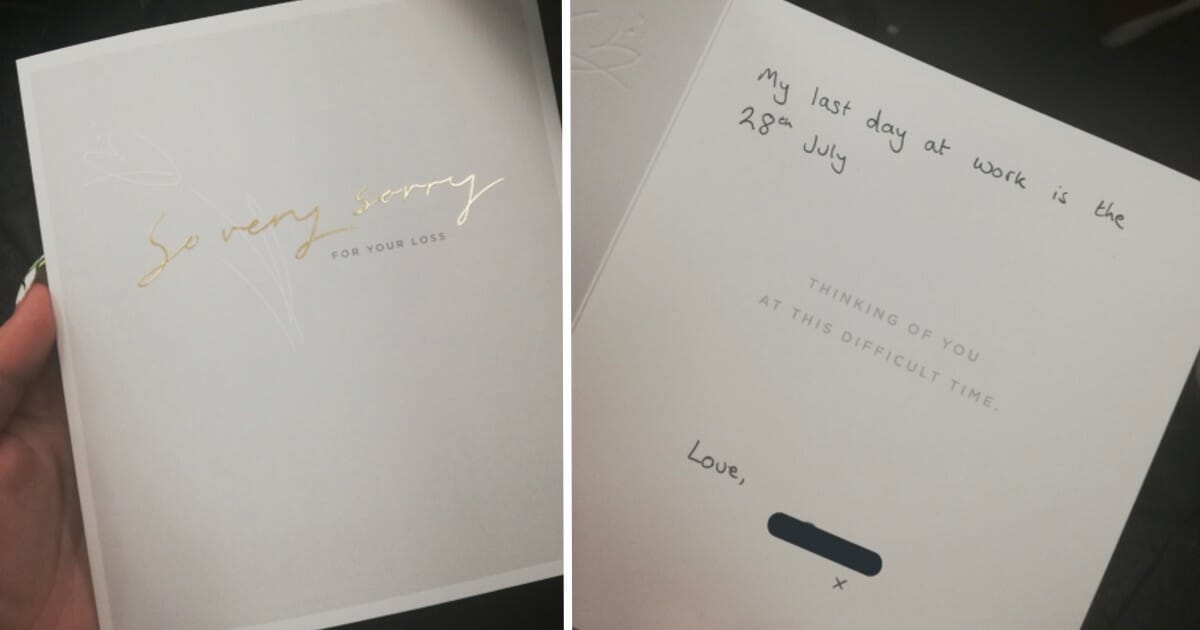 If you’ve ever resigned from a job then you know the process is typically formal.

Generally you draft a professional letter and send it to your boss or HR informing them of your decision.

When Sam Baines, 22, decided it was time for him to quit his job he wanted to do things a little differently.

He resigned by sending his boss a sympathy card.

Baines told INSIDER that he needed to leave his job at a call center in Sheffield, UK because he would be returning to school in the fall. He had worked there for almost a year, but it was time to move on.

“We are a really close team and have a fantastic manager, so we’re always joking around and having fun,” he said. “I knew I had to do something a little more creative when giving my notice to try and get one more joke in before I left!”

one of our team members handed in their notice like this ??? pic.twitter.com/tqc9Hn6ODE

Baines said he came up with the idea because he was always joking with his team about how much they’d miss him when he left.

“It went down great and helped make a positive from an otherwise sad situation.”

His soon-to-be former coworker, Hannah, shared an image of the card on Twitter and it went viral.

The front of the card reads, “So very sorry for your loss,” while the inside reads, “Thinking of you at this difficult time.”

Sam wrote a message of his own inside, informing his boss his last day would be July 28.

“Everyone was laughing and pretty amused with the card,” Hannah told INSIDER. “It was done in good spirit and not as a petty reaction as some people think.”

Others shared how they resigned, and they’re just as funny!

My mom retired similarly. No one but HR knew she was going to retire that year, then she emailed "Cake in the breakroom" to her whole office.

(Cake reads "Happy Retirement To Me") and she left for good 30 minutes later, full pension and all. Lol pic.twitter.com/WYHM222tTL

I took it just a bit further. pic.twitter.com/jW74isf4Hj

Would you ever resign from a job using a sympathy card?