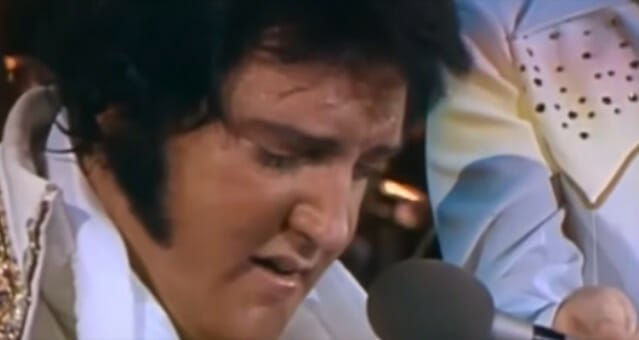 Who doesn’t love the King of Rock? Elvis Presley blessed the world with his untamed talent, extraordinary charisma and incredible entertainment skills.

This was a legend who left us much too soon. But what I admire most is that despite illness and other predicaments in his life, Elvis never failed to come forward with passion and the ability to sing from the depths of his soul.

This iconic, extraordinary performance is a great example. Recorded just 6 weeks before his untimely death at 42 years young, it proves that Elvis certainly remained the King of Rock until the very end.

In this previously little-known video, Elvis sings favorite classic “Unchained Melody” with such intensity that many consider this final show to be his all-time best.

As per usual, Elvis gave no less than 100% to his audience, in this case, a large crowd in Rapid City, South Dakota.

This performance is considered by many to be one of the King of Rock’s best gigs ever and was in fact his final recorded show — thankfully preserved for us to enjoy today.

Elvis, clearly a little fatigued due to his illness, takes his seat behind a piano and begins an absolutely breathtaking interpretation of the beloved classic.

It’s probably fair to say that not a single person in the crowd failed to get goosebumps that day!

Watch the heartfelt, iconic performance below.

What I would do to have been part of the audience that day! Share this memorable performance with your family and friends if it moved you, too.