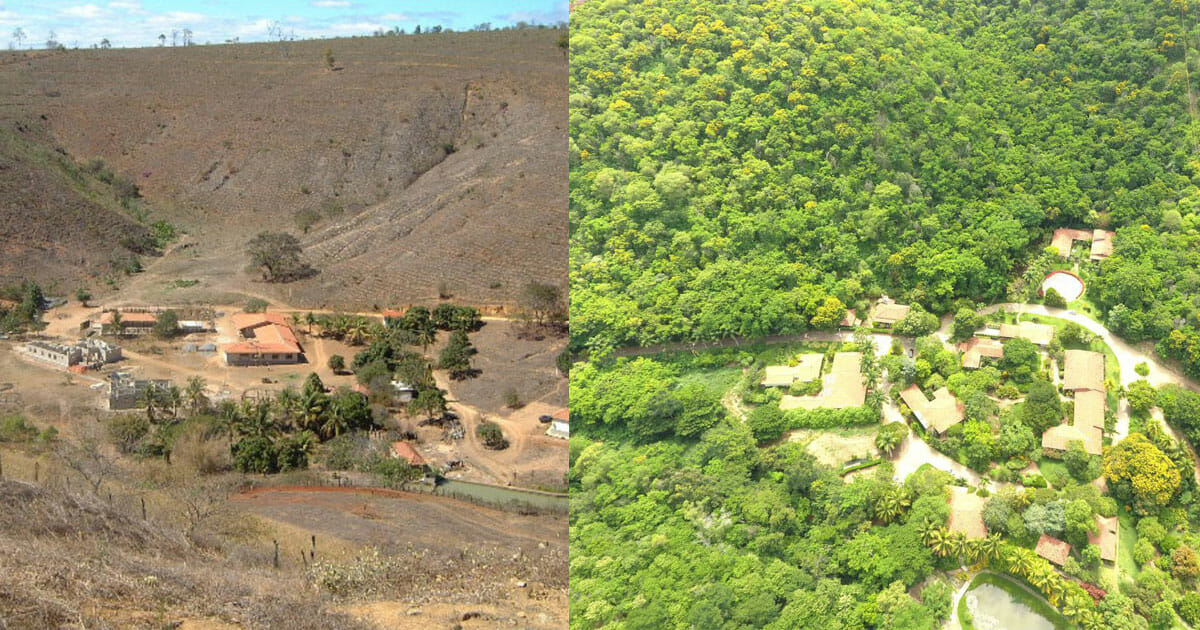 After putting in decades of hard and often difficult work as a renowned photographer, Sebastião Salgado was looking forward to moving back to his family’s land in Minas Gerais, Brazil. But when he and his wife arrived, the land was destroyed.

The lush green scenery he was used to seeing as a child had been replaced by dirt and ruined by deforestation.

“The land was as sick as I was–everything was destroyed,” Salgado told The Guardian in 2015. “Only about 0.5% of the land was covered in trees.”

To some it might have seen like a crazy idea, but the Brazilian photographer, who had recently returned home from an assignment in Rwanda, agreed. The couple would replant acres upon acres of trees.

In the late 1990s, the husband and wife team got to work and founded Instituto Terra, and with the help of a local forestry engineer and about two dozen volunteers, the Salgados planted their first seedling in December 1999.

They placed the young plants about 10 feet apart across 1,754 acres.

Their plan was to plant trees and other greenery that would not only provide shelter for birds and insects that they hoped would return to the area, but would also restore the soil.

Unfortunately, things did not go exactly as planned and they lost a significant amount of their seedlings–about 60 percent.

“We made the holes too tight,” Salgado told Smithsonian Magazine. “For weeks I was sick—sick to see this disaster.”

As the years went by, the Salgados figured out what worked and reduced the number of trees they lost to about 10 percent.

Since the couple founded Instituto Terra in April 1998, they have replanted an entire forest of over 2 million trees. In addition, they have seen the return of 30 different species of mammals, 168 species of birds, and 15 species of reptiles.

A large part, 1,502 acres, of the couple’s property has been declared a Private Natural Heritage Reserve and is used to educate people about the environment.

“We need to listen to the words of the people on the land,” Salgado explained. “Nature is the earth and it is other beings and if we don’t have some kind of spiritual return to our planet, I fear that we will be compromised.”

“Perhaps we have a solution. There is a single being which can transform CO2 to oxygen, which is the tree. We need to replant the forest,” Salgado told The Guardian.

“You need forest with native trees, and you need to gather the seeds in the same region you plant them or the serpents and the termites won’t come. And if you plant forests that don’t belong, the animals don’t come there and the forest is silent.”

With the help of two dozen workers, Sebastião Salgado and Lélia Deluiz Wanick Salgado replanted an entire forest in 20 years.

Not only were they responsible for bringing back a portion of the Atlantic Forest in Brazil, but they also helped to bring back over 200 species of animals to the area.

Share this article with your friends if you think what the Salgados did was amazing.