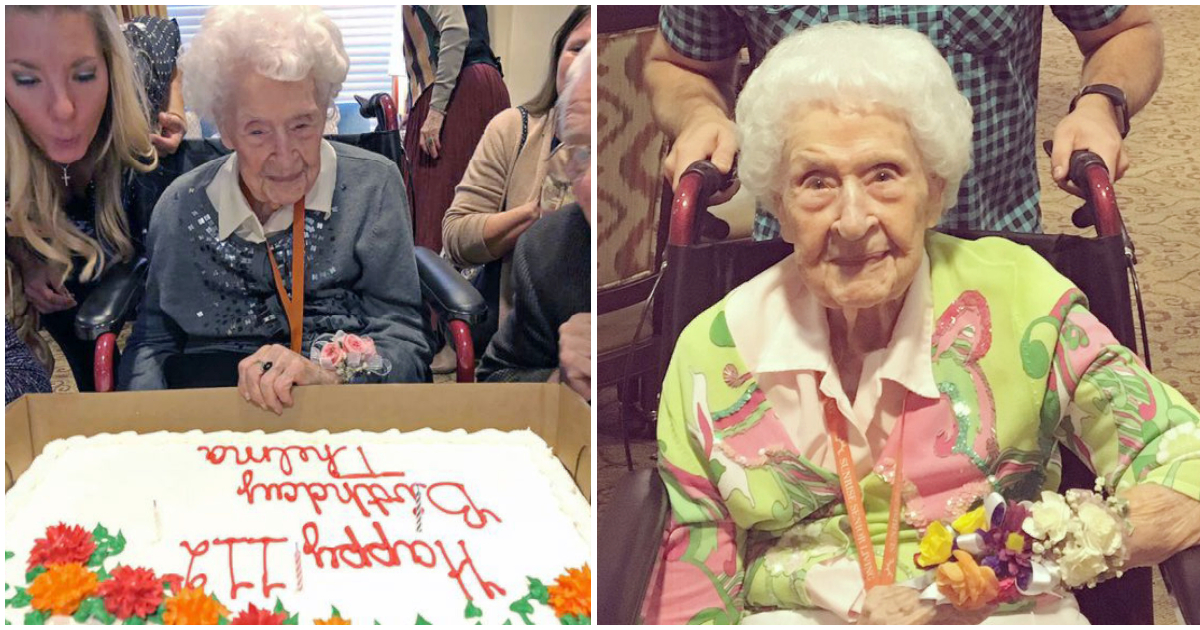 Everyone hopes to live a good long life, but only a lucky bunch get to surpass the life expectancy and make it past 100.

And a few people go even further than that, becoming some of the oldest people in the world. For years, North Carolina woman Hester Ford held the record as the oldest person in the United States.

Her passing means that the title of the oldest living American passes on to somebody else, and that new record-holder is Thelma Sutcliffe, a Nebraska woman who celebrated her 114th birthday in October.

Thelma already held the distinction of being one of the oldest people in the world, and is already a local celebrity for her longevity.

But she’s not one to let the fame go to her head. “My aunt has never been one who wants the fanfare and notoriety on her birthday,” Thelmas nephew, 93-year-old Rev. Warren Sorenson, told the Omaha World-Herald for her 114th birthday.

“She would rather just have her birthday and leave the rest of the elaborate celebration alone.”

Themla was born on October 1, 1906 in what was then called Benson, Nebraska, according to the Omaha World-Herald. She was married to her husband Bill until his death in the 1970s, and the couple had no children.

Her nephew says she was a generous spirit during difficult times.

“During the Depression, our family was extremely poor,” Sorenson said. “Thelma’s husband, Bill, worked for the (U.S.) Post Office, so they were better off.”

“I remember her bringing over presents, not just for Christmas, but anytime, for myself, my two brothers and my sister. I would go to war for her because of what she did for us.”

He’s repaid the favor by visiting his aunt every year for her birthday, although he had to miss her 114th due to COVID-19 restrictions.

Thelma has received her vaccine, which is no doubt a relief, as she hasn’t been able to eat with friends at her senior living center.

“She’s just looking forward to the day that I can finally eat with her in the dining room again,” her longtime friend Luella “Lou” Mason told the World-Herald. “She tells me, ‘I know we have to go by the rules, but I don’t like it.'”

Despite all the recent setbacks, Thelma is known for the easygoing attitude that has kept her young all these years.

“As far as her age, she doesn’t believe in worrying at all,” Mason said. “She always says, ‘What good does it do to worry?’ I think that’s how you live to be 114 years old.”

Not only is Thelma the oldest living American, she’s one of the oldest people in the world. According to the Gerontology Research Group, she’s #7 on the list of verified oldest people.

The oldest person in the world currently is Kane Tanaka of Japan, who is 118 years old. She’s still a few years off from being the oldest person in history: Jeanne Calment of France is still the record holder; she died in 1997 at the age of 122.

According to CNN, Thelma is aware of her new status as the oldest person in the US, but, whether she’s being modest or just doesn’t want to be reminded of her age, she brushes off the topic with a “We don’t need to talk about it.”

Congratulations to Thelma on becoming the oldest person in the United States! Hoping you hold the record for many great years to come!