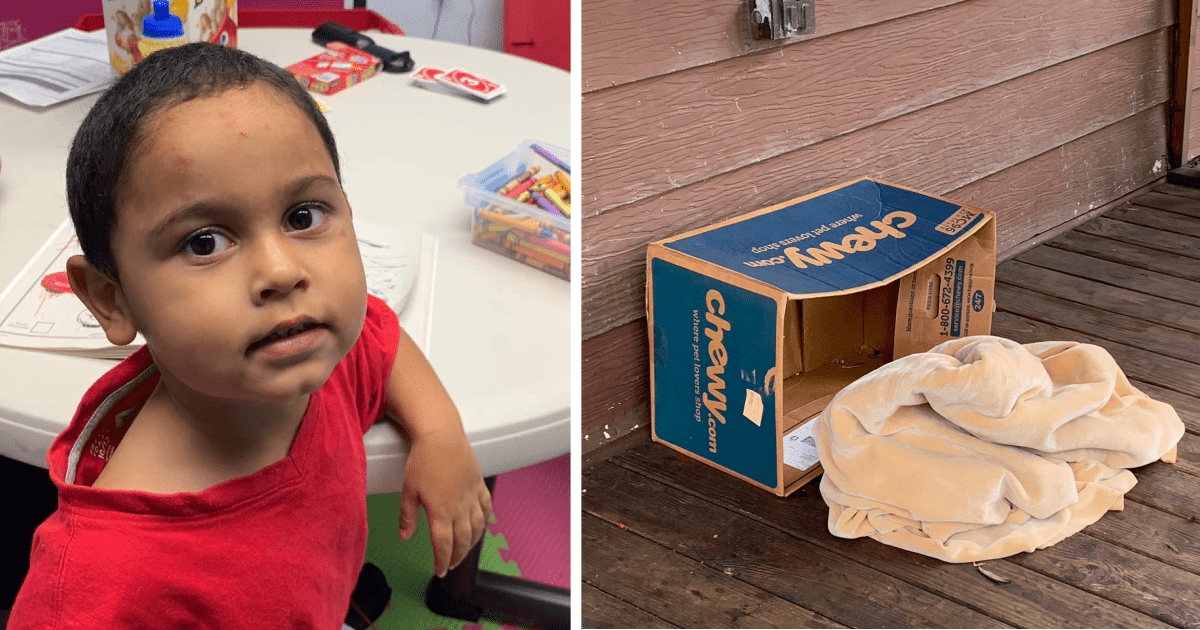 A three-year-old boy was discovered sleeping in a cardboard box on the porch of a home in Buffalo, New York, and the circumstances surrounding how he got there are baffling police.

On Sunday evening, the boy, identified as Noelvin, was scheduled to arrive in Buffalo with his parents, Nicole Mersed, 24, and Miguel Valentin, 31, and Dhamyl Mirella Roman-Audiffred, 29, a family friend. The group reportedly traveled to Buffalo from their home in Orlando, Florida for vacation.

Now, the boy’s grandmother is trying to get custody of him, and Mersed, Valentin, and Roman-Audiffred are considered missing persons.

Between 7:30 a.m. and 8 a.m. Monday morning Lois Augsburger stepped outside of her home.

“I come out the door and I open this up and I just happened to look down and I see him starting to crawl out,” she told WIVB.

Noelvin crawled out of a box that had been set out for the neighborhood cats. When he emerged he had a blanket wrapped around him and only wore a diaper.

Developing: Lois Augsburger tells me she found a little boy asleep in this box (meant for the neighborhood cats) on the front porch of her Potomac home this morning when she came out to grab the paper. @BPDAlerts are still looking for his parents. @WKBW pic.twitter.com/rzNgjzgHSf

With the help of a nearby daycare provider, Augsburger tried to learn more about the boy, but he didn’t have much to say.

“I said where’s your mommy, honey? He said ‘the car’s on fire.’ That’s all he kept saying,” Augsburger told 7 Eyewitness News.

UPDATE: I just spoke with a member of the boy’s family who tells me they intend to gain custody. The family primarily lives in Orlando. The family member tells me the boy was here on vacation with his mom and dad. @WKBW pic.twitter.com/AyUHzrR6Ui

Police asked for the public’s help with locating a possible fire, and then Monday evening they discovered a burned car with what appeared to be human remains inside. The car was located about a mile from where Noelvin was discovered.

Buffalo police have yet to make any connections, though family members are concerned.

Breaking: the boy's grandmother tells me these are his parents. The family hasn't had contact with them since 6p Sunday. They are 24-year-old Nicole Mersed and 31-year-old Migel Valentin. Their son, Noelvin was found sleeping on a stranger's porch Monday morning. @WKBW pic.twitter.com/2Eiq3wUNAk

Since officials believe the fire burned very hot and possibly for a long time, the car burned “almost to the point that we can not tell what type of vehicle or the contents of the vehicle,” Buffalo Police Captain Jeff Rinaldo said in a press conference.

For now, the family plans to go with the flow and what happens will happen.

“Leave everything in God’s hands. That’s the only thing we can do,” Luis Merced, the boy’s maternal grandfather, said according to WIVB. “Thank you very much from the bottom of my heart.”

I hope this family finds answers and soon.