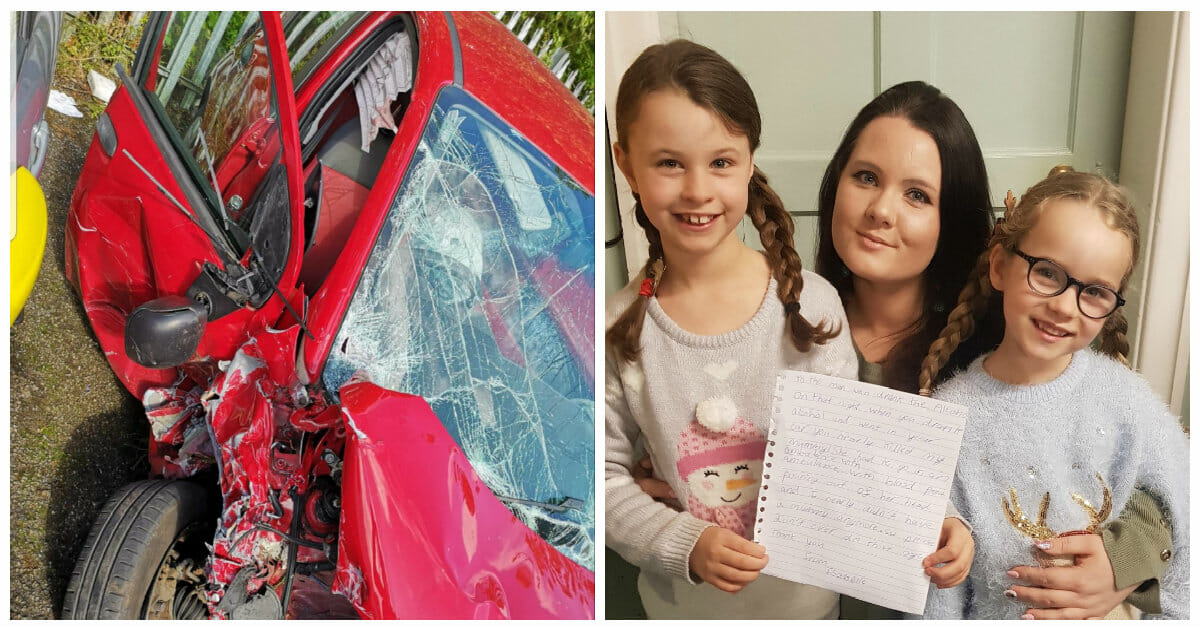 Christmas is just a few days away, and people everywhere will be heading out to parties and festive get-togethers with their friends and families.

While it’s great to celebrate the holidays in good cheer, it’s important to remember to do it responsibly. It may be the “most wonderful time of the year,” but it’s also a time with a lot of alcohol-related accidents: the festivities, the frequent travel and the dark and often icy roads lead to a spike in DUI arrests.

And one little girl’s heartfelt letter is a reminder of how a merry Christmas could easily turn into a deadly tragedy.

In September, a woman named Amelia, a mother of two from Nottinghamshire, England, was driving home from the store when she was suddenly struck by an oncoming vehicle.

“I just thought it was coming round one of the bends but after about three seconds I suddenly realized it was on my side of the road and heading straight towards me,” Amelia recalled, according to Nottinghamshire Police.

“It went into the front of my car, sending it into a spin and then into a ditch. Once my vehicle had come to a stop I remember a lot of blood running down my face.”

Luckily she survived the crash, but was bleeding out fast. She was rushed to the hospital in an ambulance.

The driver of the other car, 35-year-old Tomasz Niedziela, was arrested and found to have a blood alcohol level well over the legal limit. He paid a fine and received a 20-month driving ban.

But Amelia has continued to suffer from the crash. While she’s recovering physically, the crash left her emotionally scarred and she’s had to seek counseling. “This incident has really affected me,” she said. “I haven’t driven a vehicle since and I’m scared to be on the road, even as a passenger.”

Amelia’s family was also shaken by the accident… including her 8-year-old daughter Isabelle, who decided to find a way to help.

She wrote a letter to Tomasz (addressed as “the man who drank the alcohol”) reminding him of the cost his actions almost had on her family.

“On that night when you drank alcohol and went in your car you nearly killed my mummy! She had to go in an ambulance with blood pouring out of her head and I nearly didn’t have a mummy anymore.”

“So please don’t ever do that again.”

Isabelle wrote the letter all on her own without her family knowing. When they saw it, they were stunned… and decided it could really make a difference as a reminder to not drink and drive.

“When she presented her letter to us we were all so shocked,” Amelia said. “She asked if we could send it to the driver but we told her that even if didn’t reach him, if one person saw and read her letter on Facebook it might make them think twice about drinking and driving.”

The Nottinghamshire Police posted the letter, reminding people that Christmas increases the risk of DUI accidents and that they will not be tolerated.

“Isabelle’s letter shows just how damaging and impacting drink driving can be,” said Chief Inspector Claire Rukas. “Just one drink or drug driver on Nottinghamshire’s roads is one too many.”

Thank you, Isabelle, for your important reminder of the dangers of drunk driving!

We hope that this family continues to recover from the accident, and that people heed their warning this holiday season!