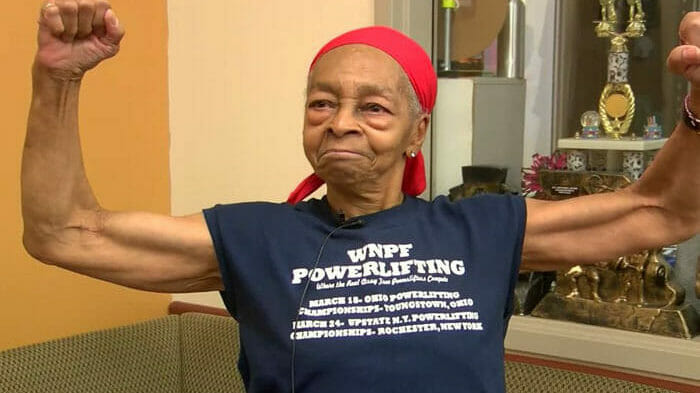 We’ve all heard those distressing stories where the elderly are taken advantage of but in this case the tables were turned, proving that old doesn’t have to mean weak.

One intruder in New York, who broke into the home of an 82-year-old woman, picked the wrong person to mess with after he ended up in hospital.

Willie Murphy is an award-winning body builder who can lift 225 pounds.

When a man knocked on her door telling her he was sick, she called the police but refused to let him in. Next thing she knew he was in her home, after breaking in through the back door.

“I’m saying to myself, ‘What the heck is that?’ The young man is in my home, broke the door,” she told WKYT News.

Hit him with a broom

But the man had no idea the fight he was about to have on his hands when Willie picked up a table and started hitting him with it.

“I’m alone, and I’m old but guess what? I’m tough,” Willie said. “I took that table, and I went to working on him. And guess what? The table broke.”

Willie told WKTY News she poured shampoo on his face and hit him with a broom while he was on the floor.

“When he’s down, I’m jumping on him,” she said. “He picked the wrong house to break into.”

Police arrived at Willie’s home and found the man on the floor, needing medical attention.

“He’s laying down already because I had really did a number on that man,” Willie said.

The strong octogenarian, who spends every day at the YMCA working out, has found she is a celebrity among all those that know her at the gym; some even wanted to take selfies with her.

Jim Marron has been friends with Willie for over a decade and wasn’t surprised when he heard what she did.

“I probably weigh close to twice as much as her. I wouldn’t want to tango with her. Don’t mess with Willie,” he said.

She does not plan on pressing charges, WHAM-TV reported.

This is the best thing I’ve seen all day…. What an inspiration Willie is! I hope I’m as strong as her when I’m 82, she’s amazing.