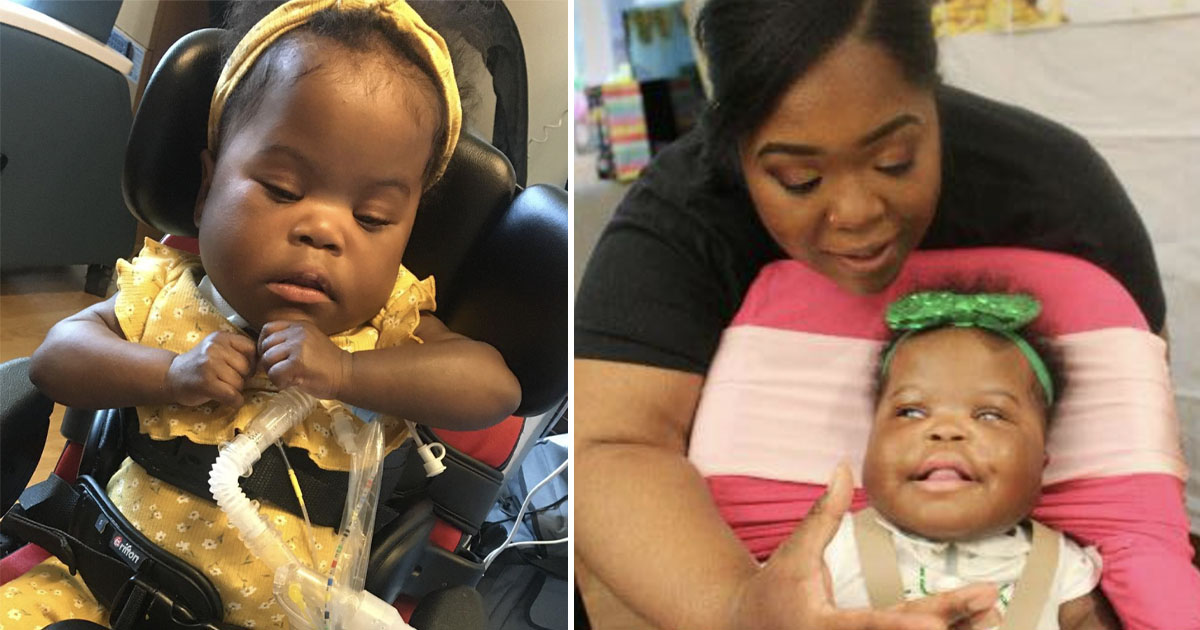 A parent wants nothing more than a happy and healthy child. This mother hoped for it too but had to deal with severe health challenges that came along with her daughter being born 4 months too soon…

Baby Autumn was born late last year but since then has only known life inside of the hospital. She turned from a baby into a toddler, but in that time never venture outside of the intensive care unit at Lurie Children’s Hospital.

Autumn was born at 23 weeks, and weighed just one pound. Her severely small size made everyone concerned whether she would survive.

“She’s going home with a ventilator, so a breathing machine, and she has a tube in her neck called a tracheostomy to help her breathe at home,” Dr. Megan Lagoski, a neonatologist at the hospital said. “Then, she’ll get feedings thru a G-tube, so something that goes into her stomach, so she is very technology dependent.”

Autumn arrived about 17 weeks (4 months) earlier than she was expected. Her mother, Tyler Robinson, unexpectedly suffered from a uterine rupture. The doctors gave a grim prognosis for the baby which the single mother accepted.

Tyler recalls saying, “If she comes out lifeless, then pass me my baby and I’ll hold her,” Robinson said of the doctor’s concerns. “If she comes out fighting, then we’re going to fight. She came out feisty and they nicknamed her ‘Feisty.’ From then on, she’s just a fighter.”

When the little girl was born, she weighed only 1.1 pounds and doctors gave her a 50/50 chance of survival. Premature babies are usually bigger than Autumn’s size hence she was labeled as a “micro-preemie.”

Being born so early, she suffered from severely underdeveloped lungs causing a chronic condition known as bronchopulmonary dysplasia. Baby Autumn was then transferred to Lurie Children’s Hospital for more specialized care.

“She came to us because she was having more and more trouble with her breathing, despite the max amount of support she could get on the ventilator,” Dr. Lagoski recalls.

Autumn’s mother says the baby is just like any other toddler and loves to cuddle, smile, play, and loves the attention she gets from the nurses and doctors at the hospital. She says that Autumn was not the only one who enjoyed and benefited from the kind staff at the hospital.

“Me sitting up in here, by myself, for most days, they are my family,” Robinson said. “Me, sitting here, and I have nobody to talk to or vent to; that’s who is here for these families. I’m going to miss this place terribly.”

Autumn’s discharge from the hospital is a bittersweet moment for her mom. While she is sad at leaving the staff and her support network at the hospital she is excited about Autumn’s future at home.

“I’m very excited, I’m ready, nervous, anxious, but it’s been long overdue,” Robinson said. After 524 of only being inside hospital rooms, 17-month-old Autumn will get her first taste at a summer out in the real world.

“So, I’m very scared, but I’m also ready,” her mother said. “I’ve been preparing for this since she was born.”

We hope that Autumn has a wonderful life ahead as she ventures out into the real world!

What an inspiring story of a mother not giving up on her child. Share it with your friends and family to inspire them!