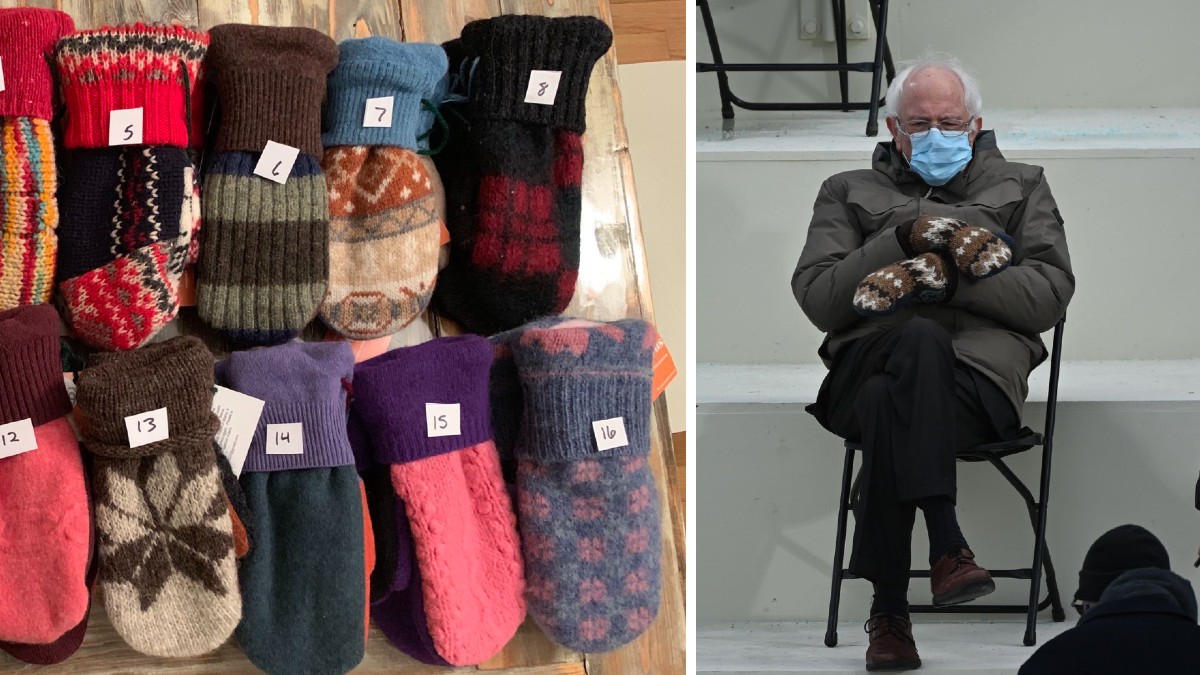 While yesterday Joe Biden and Kamala Harris were sworn in as the next president and vice president of the United States, the real star of the day was Vermont Senator Bernie Sanders.

Almost as soon as Sanders appeared at the inauguration ceremony, his image went viral.

Sanders, perhaps one of the guests who appeared most concerned about social distancing, sported his signature Burton jacket along with a face mask, and a pair of oversized brown and white mittens.

They look so cozy.

Where did they come from?

Wait, has he worn them before?

It turns out he has worn them before!

Following his loss of the Democratic presidential nomination in 2016, Jen Ellis had the opportunity to give Sanders the mittens as a gift.

Ellis, a 42-year-old second grade teacher who lives in Essex Junction, Vermont, made the mittens, which she called swittens from repurposed wool and lined them with fleece made from plastic bottles.

And while she never got to meet the Vermont senator – she gave the mittens to his daughter-in-law who was the director at her daughter’s school to give to him – she realized he must have appreciated them when he wore them during his most recent campaign.

But the big surprise was when he showed up to Inauguration Day where the swittens.

“I’m really honored he wore them today. The fact that he’s still wearing them is delightful and flattering,” Ellis told The Washington Post. “There were people at the inauguration wearing clothing from world-famous designers. Then there was Bernie, wearing my mittens.”

“He must really like them if he chose to wear them,” Ellis told Jewish Insider.

“In Vermont, we dress warm — we know something about the cold,” Sanders said in a CBS News interview. “We’re not so concerned about good fashion. We want to keep warm. And that’s what I did today.”

Although Sanders seemed unbothered by his outfit’s attention, thousands were interested in Ellis’ mittens.

Ellis said that as soon as people discovered her old tweet which included her email address, she received 6,000 emails regarding the mittens.

“There’s no possible way I could make 6,000 pairs of mittens, and every time I go into my email, another several hundred people have emailed me,” she said. “I hate to disappoint people, but the mittens, they’re one-of-a-kind and they’re unique and sometimes in this world, you just can’t get everything you want.”

Unfortunately, Ellis doesn’t make the swittens anymore, but she hopes that everyone’s interest will generate business for others who sell similar products.

What started out as a funny viral photo has turned into such a sweet story.