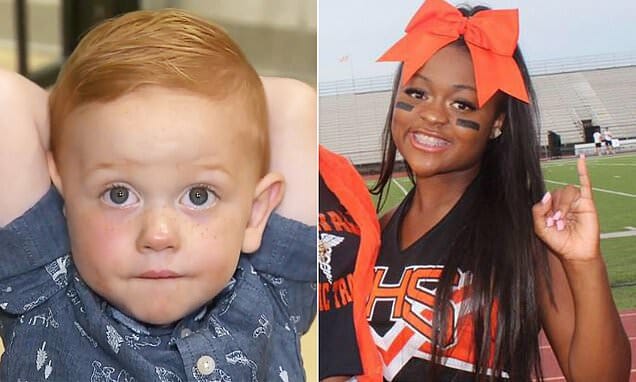 If ever there was proof that we should all know basic life-saving skills it’s this heartwarming story.

A 17-year-old Texas cheerleader was enjoying her homecoming parade when in the crowd she spotted a mom calling for help as her toddler son was choking to death.

What happened next has led to this smart and brave teenager being hailed a hero around the nation.

Tyra Winters was on a float with her fellow cheerleaders and football team from Rockwall High School, near Dallas, when she heard the desperate shouts from a mom in the crowd.

She looked out into the crowd watching the parade and spotted the little boy in trouble as his face was turning “super, super red,” she told ABC News.

Tyra then jumped from the school float and ran toward the boy.

“At this point, he’s kind of turning purple,” Tyra said.

“I picked him up and then I tilted him downwards and gave him two or three back thrusts. He then was spitting everything up.”

Tyra performed the Heimlich maneuver on the little boy, a move that his mother Nicole Hornback had first tried but it hadn’t worked.

“I just literally was holding him out and just running through the crowd trying to hand him off to anyone,” Nicole told CBS News.

Nicole praised Tyra for being so brave and was so grateful that she was willing to help save her child’s life.

“She saved my baby,” she added. “I commend her for being a teenager and being trained,” Nicole added after the two hugged in a reunion just days after the event.

Tyra credited her mother for teaching her the lifesaving maneuver, something that she then took with her to save a toddler. It’s a day neither Tyra or Nicole will ever forget.

Find out more about this story in the clip below.

Teens like Tyra should be celebrated and moms that teach their kids life-saving skills should be praised.

Please share this story to help us do just that.