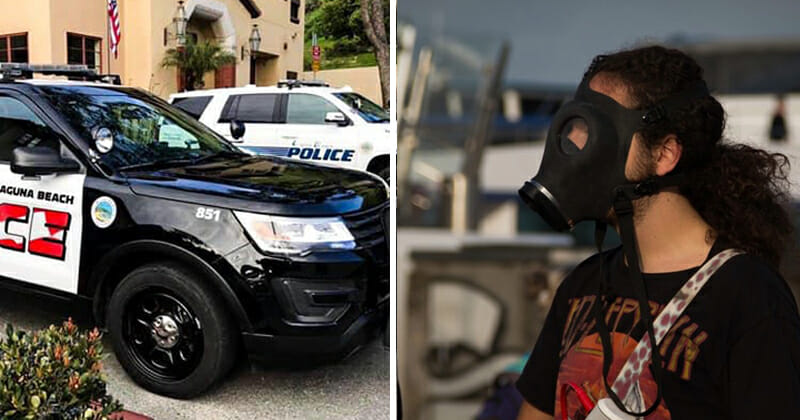 Last year, 144 law enforcement officers were shot and killed in the line of duty, according to NPR.

The rising number of law enforcement officer deaths in 2018 is disappointing news and these figures show how dangerous and difficult their job really is.

But it is not those numbers that has made the discussions flare up in Laguna Beach, California.

When the Laguna Beach Police Department unveiled their patrol cars’ new design, they were hoping to give their cruisers a much-needed facelift.

However, as soon as some people saw the design, they immediately demanded the department to change it.

Some critical voices thought that the new design was “a symbol of racism” toward immigrants, according to LA Times.

When the Laguna Beach Police Department unveiled their new design on their cars, they never expected to receive any backlash.

The Los Angeles Times reports that the Laguna Beach Police Department is in hot water with the city council for the wording on the patrol car doors, which features “POLICE” in American flag print.

The word “police” features prominently across the side of each vehicle, painted in an Old Glory-inspired red, white and blue design.

While some in the community take pride in the patriotic look, others find it problematic. The decals prompted criticism from a small minority of the public who said the stars and striped are offensive, and aggressive, particularly to immigrants.

Mayor Pro Tem Steve Dicterow confirmed that some people have found the print to be racist. He said he received about a dozen emails of concern from residents after the city council approved the design.

“Some of the words people used was that they felt it was threatening, intimidating, harassing and a symbol of racism,” Steve Dicterow said.

At a recent council meeting, local artist Carrie Woodburn said the design scheme and having the American flag on the squad cars looked “aggressive.”

Carrie Woodburn said she got more than 150 angry messages via phone calls, texts, voicemails and emails from people who disagreed with her assessment.

But Woodburn, whose parents served in the US military, said she wasn’t criticizing to the appearance of the flag.

“I don’t really care too much about the design, other than what I said — it’s bad art,” Woodburn said.

The matter dates to February, when the proposed graphic that the council unanimously approved was a more muted version.

“Clearly, the way it looks on the car is not what anyone expected it to look like,” Dicterow said.

“I think it’s reasonable that we’re going to look at it again so that whatever we [approve] is exactly what we put on the car.”

But the new lettering also has plenty of fans.

When the council proposed a more muted black-and-white version of the text, a small group of protesters gathered near the beach Monday afternoon to show support for the patriotic design.

“People are screaming that the American flag on a police car is somehow or another … hurting people’s feelings who might be immigrants or visitors,” said Councilman Peter Blake.

“People are actually ridiculous enough to bring up comments about our cop cars having American flags on them.”

And for example, the Laguna Beach Police explained that they haven’t received any negative comments.

In fact, they say that the reactions have all been positive and those driving the vehicles haven’t heard complaints.

On Tuesday night, the City Council decided to keep the American flag-adorned lettering that became the subject of a nationwide debate over whether the design is patriotic or “threatening.”

The decision came in a 4-1 City Council vote, after two hours of raucous public comment that at times included the singing of the national anthem and chants of “USA.”

For me, the American flag doesn’t represent any political ideology but a nation of diverse yet united people.

It’s not a Republican flag, it’s not a Democrat flag. It’s our flag, and we can’t lose that.

It’s disturbing that our nation’s flag is being portrayed by some as a symbol of racism and hate when it is simply the penultimate example of our country’s identity.