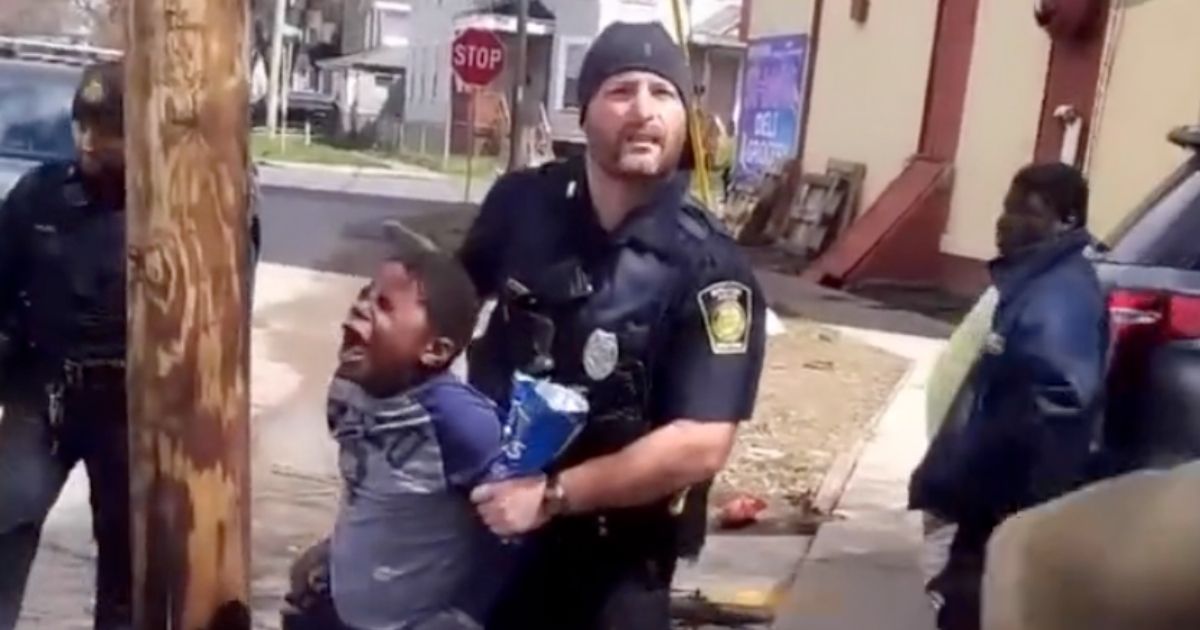 Your entire worldview is shaped when you are a child. One negative interaction with an institution can stay with you for the rest of your life and fill you with mistrust. As such, an 8-year-old detained by the police can quite easily spend the rest of their life being fearful of officers!

A video showing an 8-year-old boy crying profusely as police officers detain him in Syracuse, New York has been making rounds on the internet. The video itself was filmed by a concerned bystander who had the presence of mind to film the entire incident.

The video was posted on Twitter and now has over 5.7 million views. The video’s caption alleges that the entire incident was over allegations that the child stole a bag of chips. And that the police used unnecessary aggression with the child over what seems to be an incredibly small allegation.

The person filming asks the police what they are doing and then adds a comment about how the person they are manhandling looks like a “baby” to him. To this, a police officer in the video responds, “He’s stealing stuff. If he breaks into your house and steals something —”, the rest of his sentence is inaudible in the video.

The person filming responds with, “Y’all treat him like a hard-core, blooded f—— killer”. To which the police officer says, “keep walking, dude. You don’t even know what you’re talking about.”

After this interaction, the child can be seen putting into the back of a police vehicle. In the video, you can hear bystanders discussing how the child looks too young to be treated with such intensity by police officials.

The child’s father, Anthony Weah is now alleging mistreatment of his son by the police officials. Weah says he was driving on the highway when he received a call from the police saying they had his kids.

He said the police brought his kids to their house to talk to him. When the police said they detained his child over stealing a bag of chips, Weah asked to see the stolen item, to which the police responded that they had taken it from the child.

Weah said when he saw the video, it upset him to see his son so distressed. He says he is worried that in the future, other children will be manhandled by the police, something he wants to take a stand over.

The Syracuse Police Department has since responded. They have clarified that the child was never been placed in handcuffs, and that body-camera footage from the incident was under review.

Their statement reads: “There is some misinformation involving this case. The juvenile suspected of larceny was not placed in handcuffs. He was placed in the rear of a patrol unit where he was directly brought home. Officers met with the child’s father and no charges were filed.”

Syracuse Mayor Ben Walsh also made a comment on the incident, stating that this demonstrates a continued need to support children and families and also invest in alternative solutions to support the city’s officers.

The Mayor added: “Officers were responding to a call for a larceny that had just occurred at a nearby business. Based on what I have seen, the body camera footage demonstrates no handcuffs were used by officers at any time. The child was placed in the back of a patrol car and taken home to his family. The officer knew the child from prior interactions and explained to him that he was being taken home. The officers returned the child to his family and discussed the incident with his father before leaving without filing any charges.”

Kenneth Jackson, who filmed the entire incident, spoke to local news about why he felt the need to intervene. He said he felt the child’s terror and believed that the police need better ways to interact with minors.

There is a lot of opposition to the actions of the officers of the Syracuse Police Department including that of Michael Sisitzky, the senior policy counsel for the New York Civil Liberties Union. Sisitzky made a statement saying, “No child should ever experience abuse at the hands of law enforcement. There is no justification for the Syracuse police to traumatize an 8-year-old.”

David Thomas, a professor of forensic studies at Florida Gulf Coast University and a former police officer with 20 years of experience weighed in on the matter as well.

Thomas believes the police officers handled the matter adequately. He added that officers have a few options when it comes to dealing with minors, they can counsel and release them at the scene or take them to the station and release them in the care of their parents or guardian. Whether they choose to file charges or not doesn’t change this. In more serious cases, officers can take the minor to a juvenile detention center.

However, when it comes to minority communities and their interactions with law enforcement, things are still rife with tension. After the 2020 protests against police brutality against African Americans, people view police interactions with minorities with skepticism.

An 8-year-old child sobbing and scared is a heartbreaking thing to witness no matter what. We hope incidents like these do not happen in the future.