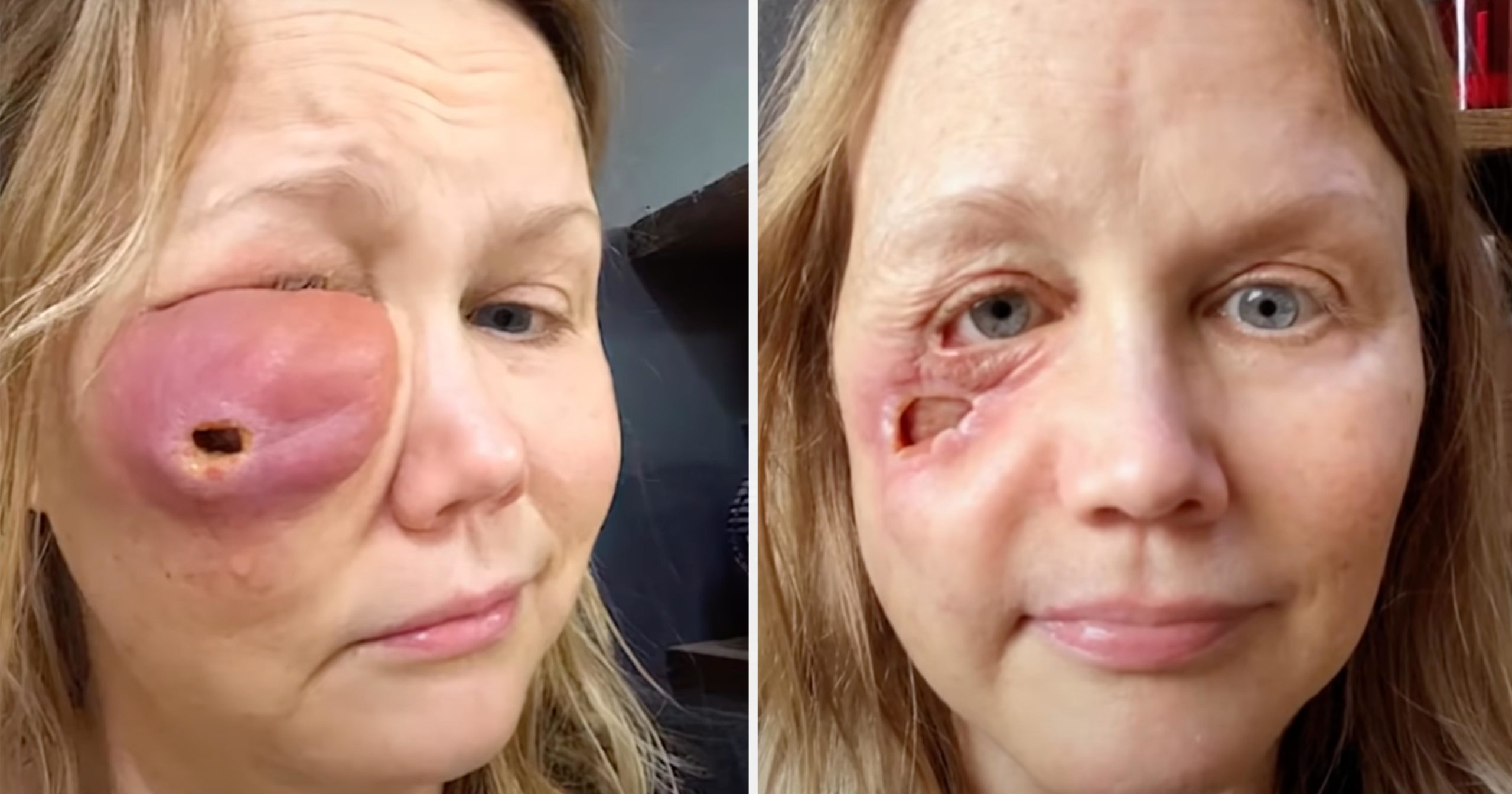 These days, altering aspects of one’s face, such as lips, nose, cheeks, or forehead, is pretty common. It’s easy to access, and many so-called specialists operate within the plastic surgery business.

However, they’re not all legit, and it’s vitally important, that one always go to a real doctor who knows what they are doing. That’s something Gina Anderson from Oregon realized, but sadly too late.

Anderson – a neurologist – wanted to “look better” upon turning 40, and decided to tweak some things. A colleague helped her with cosmetic fillers, only for things to take a horrific turn years later. Gina ended up with giant inflammation under her right eye, and it transpired that she’d been injected with silicone. The problem only grew, until Anderson was left with a gaping hole in her cheek.

Gina turned to doctors on the television series Botched, where she aimed to get the help she needed to fix her face. This is what happened – and what Gina Anderson looks like now.

Being comfortable in own your skin is one of the most important things in life. It doesn’t matter if that means being bigger, skinnier, taller or shorter, bald, covered in hair, or anything else relating to appearance.

Sure, we all have things we’re perhaps not one-hundred percent happy with, but in the end, feeling comfortable and accepted for who you are is crucial in life. The key is to accept yourself, not chase acceptance from others.

While some deal with matters by changing hairstyles, going to the gym, or even having surgery, others feel like change at a more fundamental level is what’s needed.

We will always reiterate that you should always do whatever makes you happy and comfortable. However, we also advise that you see a legit specialist if you’re ever considering plastic surgery – no matter what it’s for. Your body is on the line, so do your research well.

For Gina Davidson from Oregon, research would have been a good thing. She works as a neurologist, and when she turned 40 years of age, she wanted to do something to “look better.”

“A colleague offered to do fillers for me, and it was like ‘well, I’m in my 40s, I’m going to look a little bit better,'” she said on the reality television series Botched.

Gina thought she was getting Restylane or Juvederm, two cosmetic treatments referred to as fillers. However, it turned out that she was injected with silicone, which changed everything,

Silicone inflamed her eye and cheeks

Due to the silicone, her right eye and part of her cheek became deformed. Not only were the silicone injections illegal, but her eye and cheek were left greatly inflamed.

Though she had injections in both of her cheeks, somehow only her left side received the silicone. In the end, Gina and her husband concluded it must have been because she had two different injections with two different products.

Four years later, things had gotten really, really bad. The horrifying effects of the illegal silicone injections had begun to show. The inflammation was called a granuloma, which is usually caused when immune cells clump together and create nodules at the site of a specific infection or inflammation.

According to experts at Mayo Clinic, granulomas are defensive mechanisms that trigger the body to ward off foreign bodies, usually to prevent bacteria from spreading.

In principle, the granuloma Gina had on her cheek and eye was trying to protect her. But in reality, it turned out to be something straight out of a nightmare.

In a matter of days, as Gina recalled, the granuloma had grown large. And then it suddenly burst open.

“All of a sudden, it just went boom, and there’s just huge granulomas,” Gina shared.

At that point, Gina knew she had to get help. She went through five different corrective surgeries to remove the silicone, but none of them did the trick, and the granulomas returned. In the end, she was left with a gaping hole in her cheek.

“You can’t sleep, and you’re in constant pain. It’s hard to think on your feet all the time. This isn’t just me looking slightly pretty. I’m in agony, I don’t sleep, my hair started thinning kind of like a hair loss. And I just started feeling kind of weak and fatigued. It’s been a nightmare.”

Gina hadn’t received the help she desperately needed, and so decided to turn to Dr. Terry Dubrow and Dr. Paul Nassif, featured on the reality television series Botched.

“When you get a granuloma, which is a foreign body inflammatory reaction, that typically happens between six months to a year,” Dr. Dubrow explained.

“The fact that Gina didn’t start developing those granulomas until way later indicates it’s a very slow, smoldering inflammatory chronic response that could be potentially very, very difficult if not impossible to treat.”

Even though Gina’s five surgeries made the hole in her cheek disappear, she had to have two further procedures at the Botched clinic. They took some fat from her belly and added it beneath her cheek skin to give the area some volume.

Dr. Paul Nassif was responsible for Gina’s surgeries. During the first procedure, he said that he found “unusual things.” It turned out that he removed what he explained looked like “a piece of gauze” on her face.

Afterward, Gina explained that her pain was slowly going away, and she was finally able to sleep.

“I’m just really grateful now that I have a chance to reclaim my life because things were starting to look dismal. This is the best I’ve felt in a long time, so I’m just really crossing my fingers that this is really the end of my personal hell.”

But the joy of being able to sleep and not being in pain all the time didn’t last long. Unfortunately for Gina, there were several complications from the first procedure, and the swelling in her cheek returned.

Dr. Nassif explained that the problems are called recurrent seromas. Sadly, Gina had no choice but to be put under the knife again.

“My only alternative at this point is to open her up again, look for the capsule of the seroma, and remove it completely, and hopefully, this will be it,” Nassif said.

This is Gina Anderson from ‘Botched’ today

“For some reason, Gina’s body is constantly making fluid in her cheek following her first surgery. Why is this happening? I don’t know,” he added. “This just goes to show you that you can never predict what’s going to happen in regards to healing after you operate on a face that has had silicone injected into it.”

The second time around, Gina finally got the result she wanted. She was “unbelievably happy,” and her face was pretty much back to normal. The doctors did a fantastic job, and Gina was ready to start her new life.

Looking at the latest picture after the second procedure on Botched, we understand that she is happy. Gina is looking terrific!

She added: “My thought process is actually getting faster. I mean, it’s just a miracle. It’s just life-changing.”

Plastic surgery should only be performed by a real specialist, and if you’re ever thinking about undergoing any procedure, make sure you’re visting a real expert.

Though some want to change aspects of their bodies, we should also try to always be happy and confident about who we are, even if from time to time that can be challenging. In the end, we always matter, and there’s always something we can be proud of!