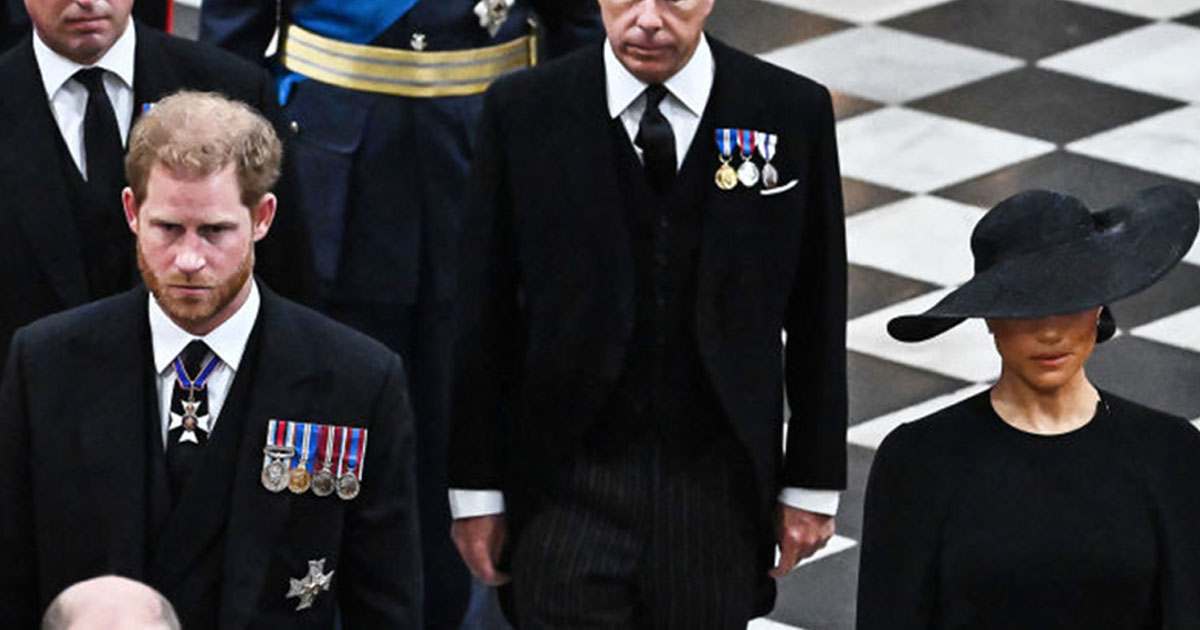 The Queen’s passing on the 8th of September, 2022 meant that the Royal Family had to jump to action and carry out the various duties assigned to them.

Prince Harry and his wife Meghan were coincidentally in London at the time the news of the Queen’s ill-health hit the airwaves. Hence the couple has been right there with the Royal Family through it all…

The Queen’s funeral garnered media attention from all over the world. The world’s eyes were trained on the Royal Family during the royal period of mourning leading up to the funeral on 19th September 2022.

Earlier on September 15th, 2022, during a service at Westminister Hall, Harry and Meghan faced heavy criticism for holding hands at what people considered a formal and somber occasion.

People were unhappy that while other members of the Royal Family were incredibly formal, the couple decided to hold hands that were considered disrespectful to the severity of the occasion.

However, there were also people who thought it was not only completely natural for the couple to hold hands but it was totally warranted. Journalist Lorraine Kelly defended the couple as she had a conversation with royal expert Jennie Bond. She said, “And on the way out [of the service] quite instinctively, he held hands with his wife as he should.”

She said it was “lovely to see” the couple hold hands as Harry inherited mom Diana’s sapphire engagement ring, only to later give it to William for Kate clearly needed support from his wife during such difficult moments that he was going through after losing his beloved grandmother.

And it seems the Sussexes paid attention to the headlines and criticism they received because at the Queen’s funeral on 19th September 2022, the couple kept a physical distance between them and remained formal with one another.

As the couple walked, they did so side by side, not holding or linking their hands or arms together. Loisel went on to analyze the Duchess’ body language, appreciating everything she was doing.

She noted that Meghan Markle kept her head bowed, hands clasped in front, and eyes downcast. While most members of the Royal Family walked with their hands by their sides, the body language expert thought Meghan’s insistence of having her hands clasped in the front was indeed “a sign of respect” but also served as her protecting herself as well as showing her discomfort.

Body language expert Blanca Cobb commented how the Duchess’ body language showed deference to the late Queen Elizabeth. She held her hands to her side or in front in a pose called as “the fig leaf”.

Cobb explained how these moves showed a lot of respect as they took the focus away from Meghan and showed that she did not want attention to herself. This also showed her mental state according to Cobb, who determined it was quite a sad one.

Another body language expert Judi James weighed in on Meghan’s behavior as well. She said while the couple did not hold hands during the funeral, Meghan Markle had lent “silent support” to her husband. The body language expert added, “She seemed to offer a continuation of that silent support to her husband while sitting and walking with a look of dignity tinged with sadness.”

During the service at Westminister Abbey, a British publication noted how Prince Harry was seen to “struggle with his emotions” and when everyone began to sing ‘God Save the King,’ that Prince Harry wore an “expression of sadness.”

It was noted that the expression of sadness might have been at the lyrics of the song changing from Queen to King which made the upcoming changes to the monarchy sink in for the Prince.

When the late Queen’s coffin was transferred to a hearse at Wellington Arch, it was seen that Meghan Markle’s lips were quivering and she wiped away tears. This was the point that the casket would take its final journey to Windsor Castle.

After the funeral had ended and Harry and Meghan were by each other’s sides again, the couple was seen holding hands as they sat in the second row at the ceremony that followed the funeral.

Holding hands with your partner or receiving physical touch from them is always a great way to reduce stress. psychotherapist Belynder Walia noted that holding hands brought out feelings of “comfort, warmth, pain release and friendship.”

There has been a lot of research that has shown time and again the benefits of hand holding and receiving physical affection from your partner. Clinical psychologist Dr. Tony Ortega, also stated holding hands was a good way of “managing negative emotions” you may have.

The Royal Family needs to have time to themselves as they grieve this major loss to their family. We are sending them support in this difficult time for them.