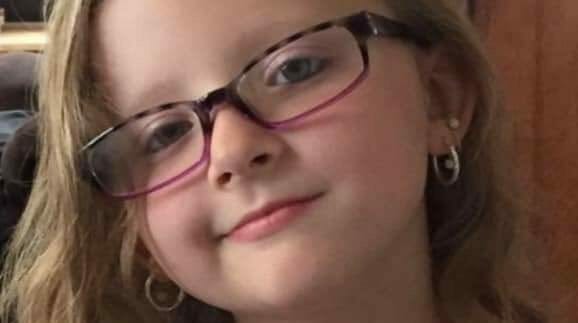 Every parent’s worst nightmare is that something bad could befall their kid.

But some things cannot be protected against.

Cancer is a horrible disease which causes millions of deaths every year, unfortunately many of those are young children.

Now a whole community is mourning the loss of a beloved 10-year-old girl, Savannah McHale

She passed away after a struggle with diffuse intrinsic pontine glioma (DIPG) –– an aggressive form of terminal brain cancer, the Southport Police Department announced Tuesday.

Approximately 200-400 children in the United States are unfortunately diagnosed with DIPG each year and the children affected are typically between the ages of 4 and 11.

As the tumor progresses, it interferes with breathing and heartbeat – which ultimately results in the child’s death.

Savannah McHale, from Southport, Indiana, had been going through treatment in Cincinnati but there was nothing the doctors could do for her in the long run.

But despite her devastating diagnoses, Savannah’s always told everybody she knew to “stay happy.”

“Keep smiling and stay positive” was her message.

Savannah’s tragic death has been heart-rending for the whole Southport community.

“It is with the heaviest of hearts that we announce the passing of our dear friend, Savannah McHale. Although her time on this earth was short, she kept the the room bright with her smile and never-give-up attitude, until her last days with us.

We will miss her and wish her family and friends strength during these tough times,” the Southport Police Department wrote on Facebook.

Before she passed away, the Southport police organized a fundraiser with a local restaurant in to help the family.

“They’re all part of our family, and we want to make sure that they’re taken care of,” Officer John Benton said, according to Fox59.

It is with the heaviest of hearts that we announce the passing of our dear friend, Savannah McHale.

Earlier this year we introduced Savannah to you as a young lady suffering from DIPG, an untreatable tumor.

RIP Savannah, you touched a lot of lives!

We send our prayers to Savannah’s family and to her Homecroft Elementary family and classmates that are very devastated by this new today. ?