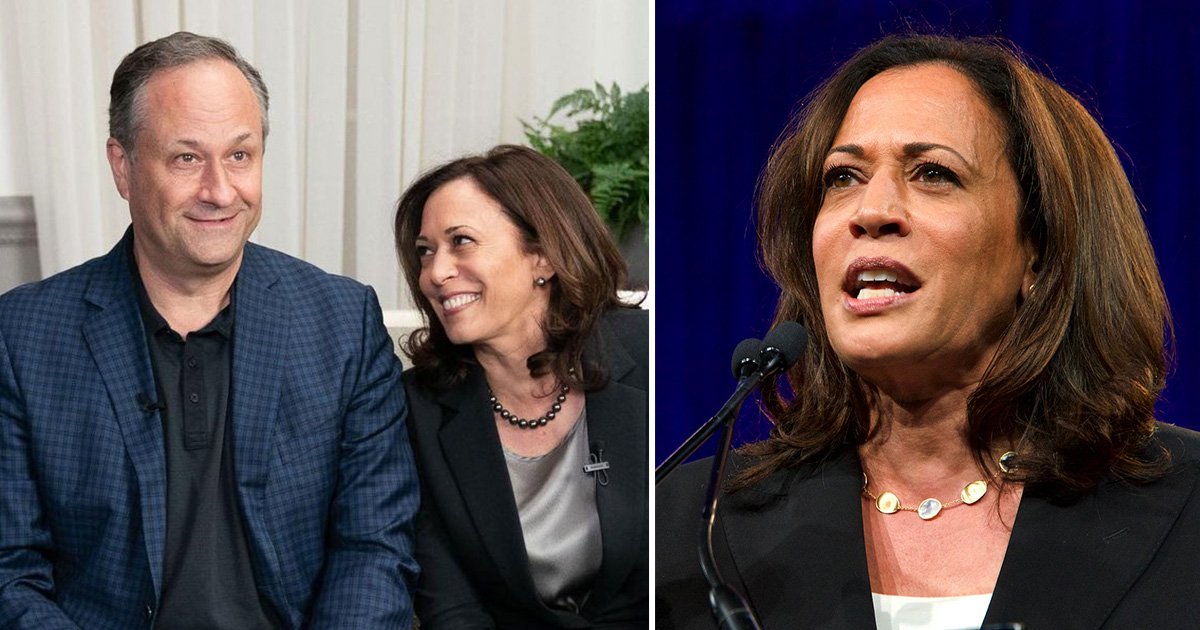 But she wasn’t the only one in the family that became historical in the process. Husband Doug Emhoff is now the first Second Gentleman in the history of the United States, and his and Harris’ story is truly amazing.

So how did they meet? And what does Doug Emhoff do? This is all you need to know!

On January 6, 2021, Kamala Harris was sworn in as the Vice President of the United States. To mark the occasion, of course, she wore her very special pearls, which mean a lot to her.

She was sworn in by Supreme Court Justice Sonia Sotomayor, who is the first Hispanic and Latin person – as well as only the third woman – to serve on the court.

“We not only dream, we do, we not only see what has been, we see what can be,” Harris said of Americans during her speech.

“We shoot for the moon and then we plant our flag on it, we are bold, fearless, and ambitious.”

Kamala Harris has had a long and successful career as a prosecutor, but she actually hasn’t been a politician with the Democratic party all that long.

Following her high-school studies in Montreal, Harris moved on to earn a B.A. in political science and economics from Howard University in 1986. Then, three years later, she got her law degree from Hastings College.

Harris started her professional career in the Alameda County District Attorney’s Office, where she earned a reputation for being a skilful, hard-working prosecutor.

In 2003, she became the top prosecutor for San Francisco, and following years of hard work in California, she was elected the first woman, as well as the first black person, to serve as California’s attorney general in 2010.

Four years later, Harris was re-elected to the post. Around the same time, her position within the Democratic party was strengthened. In 2017, Harris was elected as a California U.S. Senator and started her meteoric rise within the party.

“Whatever the results of the presidential election tonight, we know that we have a task in front of us. We know the stakes are high,” Harris told the crowd inside Exchange LA on election night in 2016.

“When we have been attacked and when our ideals and fundamental ideals are being attacked, do we retreat or do we fight? I say we fight!”

Harris was building a political base, and decided to run for president in the 2020 election. She clashed with Joe Biden at the Democratic debate in the summer of 2019, and later that year decided to drop out of the presidential race altogether.

As fate would have it, however, after it became clear that Biden was the Democratic Presidential Candidate, he chose Kamala Harris to be his running-mate for vice president. The rest, as they say, is history.

Kamala has had a successful career as both a prosecutor and a politician. But in the process she was also able to find the love of her life.

In 2014, she married husband Doug Emhoff, who also made history this month by becoming the first Second Gentleman.

So who is Doug Emhoff? And how did the two meet? Doug and Kamala shared an inspirational journey as they marched towards the White House, and this is all you need to know!

Doug Emhoff was born October 13, 1964, in Brooklyn, New York. He was raised in Matawan, New Jersey, by parents Mike and Barbara, and grew up alongside his siblings, Jamie and Andy.

His sister Jamie described their childhood as a “prototypical suburban childhood”. When Doug was a teenager, the Emhoff family moved to Los Angeles, California and he got his first job at McDonald’s. He was named employee of the month, but Doug had greater aspirations on his mind. According to his sister, he was always drawn to the law.

“He liked the idea that it was sticking up for people,” she said. “And he could always win an argument.”

Doug Emhoff went on to earn a B.A. from California State University, Northridge. In 1990, he also earned a J.D. from University of Southern California.

Just like his future wife, Kamala Harris, Emhoff went on to work in the legal field. He became an associate at Pillsbury Winthrop Shaw Pittman, and later at Bingham McCutchen.

Towards the end of the decade, Doug had transitioned from young attorney to partner – before long, he stared to work with entertainment law in Hollywood.

By this point, Doug had met and wed his first wife, film producer Kerstin Mackin. The couple tied the knot in 1992, and welcomed son Cole and daughter Ella, named after jazz greats John Coltrane and Ella Fitzgerald.

The couple divorced 16 years later, but Kerstin still plays an important role in the family. She is, of course, the mother of Cole and Ella, but also a great friend to Kamala Harris.

Kerstin Mackin was actually in attendance on inauguration day. In a 2019 Elle article, Harris wrote that she and Kerstin “are dear friends”. She continued: “our modern family is almost a little too functional”.

“They are my endless source of love and pure joy. I am so thankful to Doug, to Kerstin, and most of all, to Ella and Cole,” Kamala Harris wrote.

“And as our family embarks together on this new journey—one that has taken me to South Carolina, Iowa, New Hampshire, Ohio, Nevada, and Michigan in the last few weeks alone—I can say one thing with certainty, my heart wouldn’t be whole, nor my life full, without them.”

“She and I became a duo of cheerleaders in the bleachers at Ella’s swim meets and basketball games, often to Ella’s embarrassment. We sometimes joke that our modern family is almost a little too functional,” Harris added.

For Cole and Ella, this makes everything so much easier. They enjoy their mother and step-mother having a great relationship.

“The level of parenting between the three of them is very different now that we’re both in our 20s and are kind of able to make decisions,” Ella told The New York Times.

“So with hair and tattoos and things like that, I think they’re all in the realm of like, ‘I don’t understand it, but I want you to be who you want to be.’ They have good communication between the three of them. They are really a unit, like a three-person parenting squad. It’s really cool.”

In 2017, Emhoff became a partner at DLA Piper. Three years later, in August of last year, he decided to take a leave of absence. He deemed that it wasn’t the right time to focus on his own career, and instead wanted to support Kamala Harris 110 percent with the Biden-Harris campaign.

“Virtually overnight, I went from being a lawyer to being a member of a team fighting for justice and trying to turn the page on a dark chapter in our nation’s history,” Emhoff wrote in GQ the day before the inauguration.

“I grew to understand and admire who she is and what she’s been able to accomplish even more. She had such a tremendous weight on her shoulders, and we were in a fight for the soul of this nation—together.”

So how did Emhoff and Kamala Harris meet? Well, in 2013, a mutual friend of theirs set them up on a blind date.

Harris and Emhoff started talking over the phone the same day that their friend suggested they should meet. As fate would have it, they hit it off straight away.

Harris recalls they were “laughing the whole time”. Shortly after, they went on their first date.

“It felt like we had known each other forever,” Emhoff recalled speaking with CNN.

“I didn’t want it to end. And so the next morning, I pulled the move of emailing her with my availabilities for the next four months, including long weekends. And I said something like, ‘I’m too old to hide the ball. You’re great. I want to see if we can make this work. Here’s when I’m available next’. And I guess it worked.”

“I was terrified,” Harris jokingly said of her reaction at the time.

Kamala and Doug fell in love. In 2015, the couple got married at the Santa Barbara courthouse in California. Kamala Harris’ sister Maya officiated the wedding ceremony.

She knew that he was the right man for Kamala when she saw how happy he made her.

“Because one of the things that Mommy used to always say is life will have its ups and downs, so you make sure that you find a life partner who makes you laugh,” Maya said.

Didn’t want to meet his children

Kamala Harris didn’t have children before meeting Doug. When they wed, she became step-mom to Cole and Ella. Today, Harris is called “Momala”, because they all agreed that they didn’t like the term “stepmom”.

Yet in the beginning, when she first started dating her future husband, Kamala didn’t really want to meet Doug’s children.

Doug and Kamala took some time before she was introduced to Cole and Ella. But once she met them, they hit it off straight away.

“Cole and Ella could not have been more welcoming,” Harris wrote in Elle. “They are brilliant, talented, funny kids who have grown to be remarkable adults. I was already hooked on Doug, but I believe it was Cole and Ella who reeled me in.”

Wanting to inspire others

Kamala and Doug, alongside children Cole and Ella, have entered a new chapter in their lives. “Momala” is now the Vice President of the United states, and their father has the title of Second Gentleman.

Besides his duties as Second Gentleman, Emhoff enjoys playing golf and fantasy football. But most importantly, he wants to inspire others, as well as be a role model for other men.

“I also see this through the eyes of our kids, Cole and Ella, each of whom are coming into their own as young adults. I want them to grow up in a world where it isn’t news that a loving partner—of any gender—supports them in everything they do,” Doug Emhoff wrote in GQ.

“It reminds me of a story Kamala likes to tell about her mother Shyamala, who would always say to her daughters, “You may be the first, but you better not be the last.”

He added: “I want that to be true of me, too. I may be the first Second Gentleman, but I know I won’t be the last.”

Doug Emhoff sure is a wonderful man, husband and father. We are happy that him and Kamala Harris found each other, and we wish them all the best.