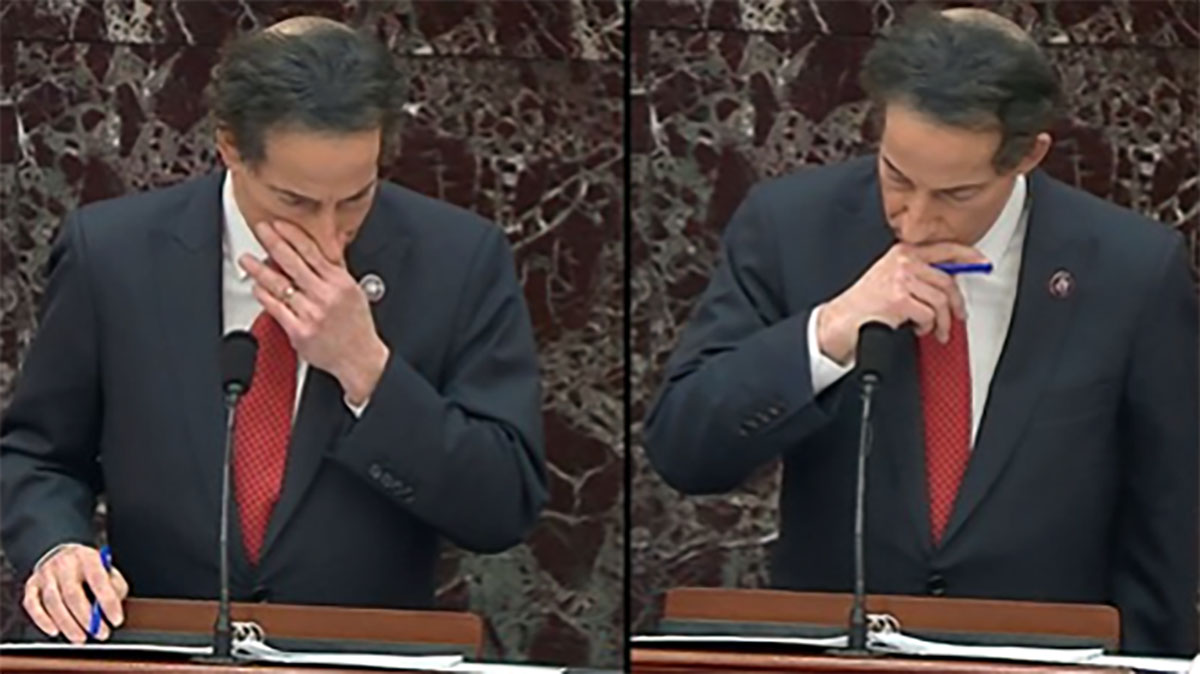 On January 6, Maryland Rep. Jamie Raskin attended the Capitol to help tally the final votes to certify Joe Biden as the 46th President of the United States, proudly taking his daughter and son-in-law with him to witness the historic event.

But little did he know the horrific events that unfolded that day would leave him fearing for his family’s life.

Less than a week before the deadly insurrection of the Capitol took place Raskin buried his 25-year-old son Tommy, according to The Independent.

The Raskins had described their son’s battle with depression and said that despite doctors, a loving family and numerous friends who adored him, the pain became too “overwhelming and unyielding and unbearable.”

Now, just weeks later Raskin is the prosecutor leading Donald Trump’s second impeachment trial and as he addressed lawmakers he broke down recalling the violent event.

Raskin said his youngest daughter Tabitha and son-in-law Hank, who is married to his eldest daughter, had joined him on what he thought would be a peaceful transfer of power.

He said the reason his family members came with him was so they could all be together during such a difficult time as it was “the day after we buried her (Tabitha) brother, our son Tommy, the saddest day of our lives,” he said.

Raskin said his family had heard there was going to be a protest over the election and “they asked me directly ‘would it be safe?’… and I told them of course it should be safe, this is the Capitol.”

Raskin then described the overwhelming fear they felt hearing the sounds of the violent mob as they entered the building and tried to access the offices of representatives.

“The sound of pounding on the door like a battering ram, the most haunting sound I ever heard and I will never forget it,” he said adding: “The kids hiding under a desk, placing what they thought were their final texts and whispered phone calls to say their goodbyes, they thought they were going to die.

“My son-in-law had never even been to the Capitol before. And when they were finally rescued over an hour later by Capitol officers, and we were together I hugged them and I apologized.

“And I told my daughter Tabitha who’s 24 and a brilliant algebra teacher in Teach For America… now, I told her how sorry I was and I promised her that it would not be like this again the next time she came back to the Capitol with me,” he said having to break while overwhelmed with emotion.

While holding back the tears he added: “And you know what she said? She said ‘Dad – I don’t want to come back to the Capitol’.”

He continued: “Of all the terrible, brutal things I saw and I heard on that day, and since then that one hit me the hardest. That and watching someone use an American flagpole, the flag still on it, to spear and pummel one of our police officers – ruthlessly, mercilessly, tortured by a pole with a flag on it that he was defending with his very life.

“People died that day. Officers ended up with head damage and brain damage, people’s eyes were gouged, an officer had a heart attack. An officer lost three fingers that day. Two officers have taken their own lives.

“Senators, this cannot be our future. This cannot be the future of America, we cannot have Presidents inciting and mobilizing mob violence against our government and our institutions because they refuse to accept the will of the people under the constitution of the United States.”

Former President Donald Trump has been accused of inciting the insurrection at the Capitol which resulted in five deaths and more than 50 police officers injured.

Trump’s lawyers will be attempting to convince the Senate that he is not guilty of inciting mob violence ahead of the riots which took place in a bid to overturn the U.S. election.

The Senate voted 56-44 to continue with the impeachment trial, with six Republicans voting in favor. To convict the former president Raskin needs to convince another 11 of his GOP colleagues.

Raskin asked for sworn testimony from Trump last week but the former president declined and his defense called it “a publicity stunt.”

Hearing Raskin recall firsthand the events that happened on January 6 following such an unbearable personal tragedy in his own life is heartbreaking.

I hope justice is properly served against all those who were involved in the violence that erupted that day. Please share.