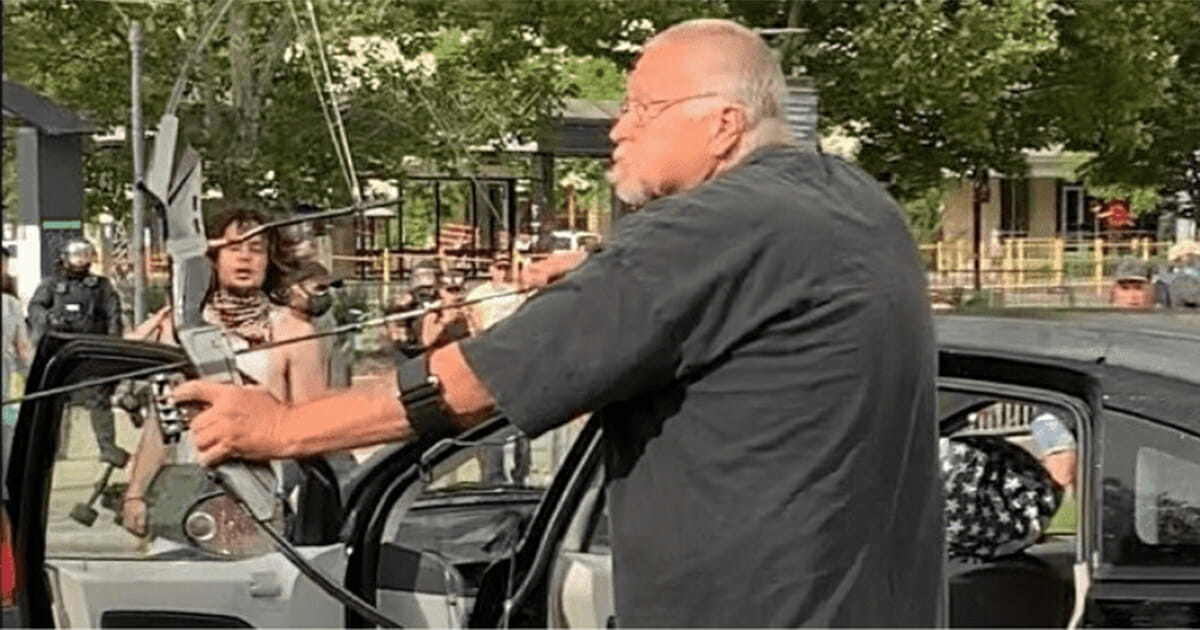 Terrifying video footage from Salt Lake City, Utah, shows a man brandishing a hunting bow and attempting to use it on a crowd of people protesting the death of George Floyd.

The film in question was uploaded to Twitter, and shows the man yelling at the woman recording and aiming his bow at a black man stood close to her.

When the woman asks if he’s an American, he angrily replies “I am an American”, before screaming “All lives matter”.

At the point in the video, things take a turn for the downright shocking. The man, reportedly identified as Brandon McCormick, then turns his bow on another black man and fires it.

Fortunately, the arrow he tried to fire missed, and McCormick was then surrounded by protesters and subdued. Police officers eventually moved in to take the man into custody.

Later, however, he had the audacity to tell a news station:  “First, I got beat up when I yelled “All Lives Matter. Then I pulled out weapons and I got beat up some more. The cops grabbed me and my car… I lost everything, coming down here to try to protect [officers] with what weapons I had. I back up law enforcement.”

Reportedly, he went on to tell another channel that “he got beat up by black people.”

Somewhat incredibly, however, McCormick was released by the officers without charge. A petition has now been launched to ensure that he faces justice. It reads:

“Brandon McCormick has been released from police custody without even a case ever being opened to investigate this attempted murder on an unarmed protester by another civilian.

“He is now claiming that protesters attacked him in his car, unprovoked, and that two black men attacked him. This is not true. At least two videos and multiple eyewitnesses can testify that he stepped out of his vehicle, loaded his weapon, aimed it at a black protester, and shot to kill before being subdued.“

I don’t know how anyone could think this is remotely acceptable behavior. This man has committed a serious crime and needs to be held accountable for his actions.

Share this article if you were shocked by a man firing a bow at protesters!