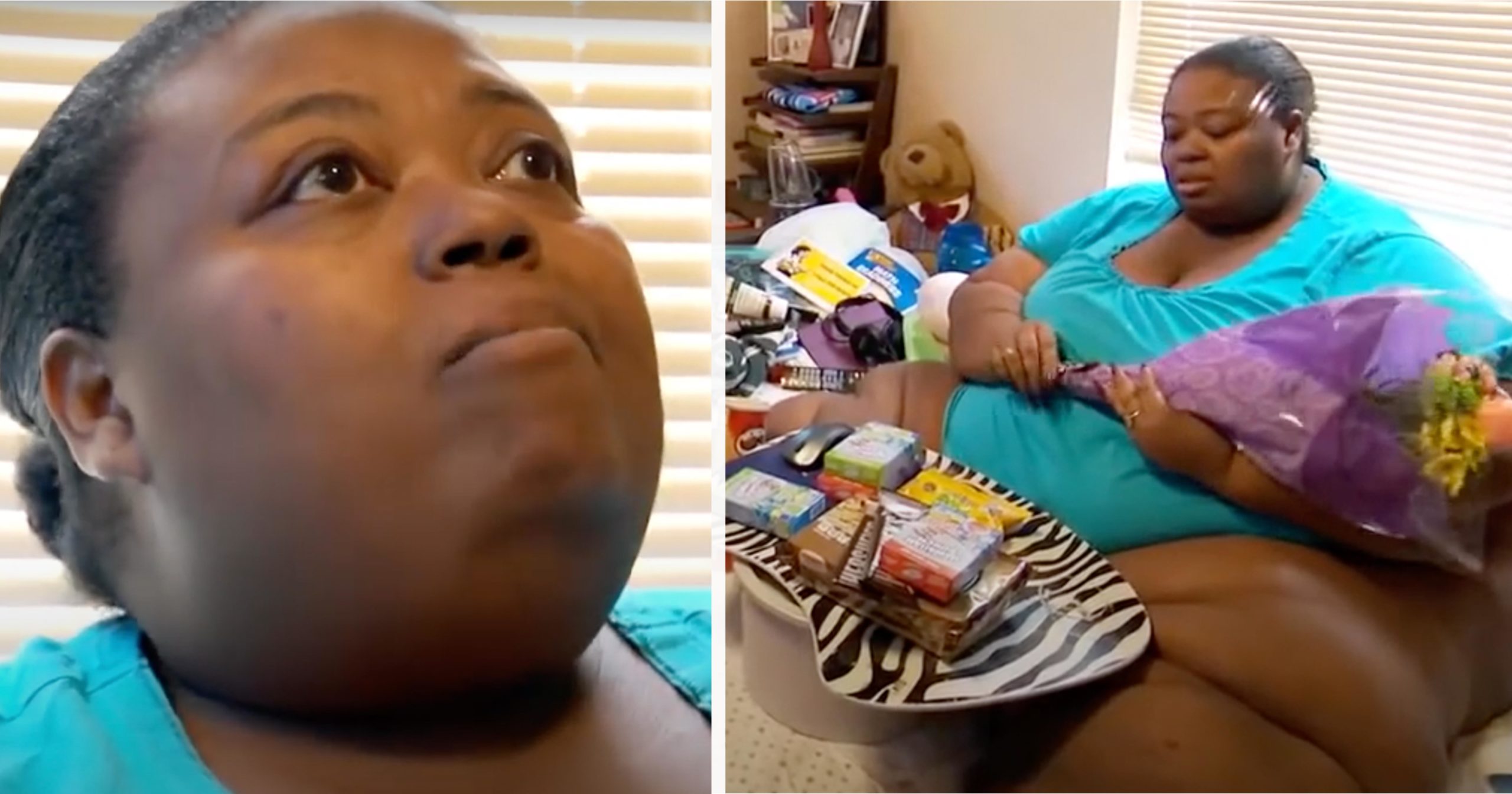 Marla McCants is one of the most memorable figures from the series My 600-lb Life. She couldn’t walk, was morbidly obese, and at one point weighed over 800 pounds.

Marla’s life was at risk if she didn’t get help, and she eventually landed her spot on the show. Today, she’s lost more than 500 pounds – and the transformation is just amazing!

A healthy diet can be a hard thing to maintain. If you have a family, a partner or many interests, it can be time-consuming to cook healthy food, and sometimes pretty expensive as well.

Fast food is definitely a trap. Sure, it can be good now and then, but in the long run it’s bad for your health if you eat too much of it. That’s why we’re always told we should work out to improve our minds, bodies and souls!

There are many inspirational people who try to teach us how to live a healthy life through exercising, eating healthy and working on our inner peace in order to feel great. But as inspiring as these physically fit people can be, so too are people like Marla McCants.

A number of years ago, she appeared on My 600-lb Life weighing over 800 pounds. Due to her unhealthy lifestyle, she was thought to be very close to dying.

However, with great dedication, and help from Dr Now, Marla turned her life around. These days, she looks amazing!

So how did she do it? Here’s all you need to know about Marla McCant’s incredible journey!

Even after someone makes it onto the show, there’s plenty of work yet to be done. When Marla McCants appeared on My 600-Lb Life, Dr. Younan. Nowzaradan, also known as “Dr Now”, wasn’t convinced that he could help her at all.

In fact, Dr. Now has actually walked away from several patients over the years because he felt that he could no longer help them.

“There have been a few patients I felt I could no longer help,” he told People.

“I will always be available if they need me. If they won’t stick to the program, at some point, I can longer help them and they are taking resources from someone else who needs it.”

Marla McCants was so morbidly obese that she couldn’t even get up to walk by herself. She was eating food in bed, even frying food in a small fryer that she always had with her.

Marla was addicted. Addictions, as we know, are never easy to break.

Marla McCants became one of Dr Now’s most difficult patients. She decided to move to Houston, Texas – where he was stationed – with her daughter, and underwent a gastric bypass surgery to help her in her weight loss journey.

However, things would get complicated. She stayed at the hospital for a while, until Dr Now decided that enough was enough.

It appeared that she didn’t wanted to cooperate, and refused to try and stand up as a part of her recovery. Eventually, she was discharged.

In an interview with Houstonia Magazine, Dr. Nowzaradan said that he didn’t make any money performing the surgeries, but instead focused on giving people a second chance in life.

“Looking at the moral obligation that we’ve got, you see somebody who has no life who could have a life,” he said.

So, his motivation truly is to help people have healthy and productive lives, instead of eating their lives away.

Speaking to People, Dr. Now said that there have been many cases where patients haven’t been able to keep their weight down even after undergoing gastric bypass surgery.

“It’s a daily challenge to work with some patients that can be self-destructive,” he said.

“My job is not to get aggravated, but to find a way to motivate them to work hard to get to their goals. There are times where I think it’s necessary for some tough love and I have to be stern with them, so I show some of my concern and frustration.”

Dr. Nowzaradan added: “Even during those times, my job is to find a way to work with them to get their weight to a healthy place. They are the patient because they need help and it’s my job to help them no matter what.”

Marla McCants’ journey could have ended the moment she was discharged. It was her daughter, Sierra, who decided that this was not going to be the end. She gave Dr. Now another call, begging him to help.

Stood up for the first time in years

In the follow-up program, McCants was seen sitting in her bed at home, still relying on her daughter Sierra for practically everything. By this point, though, she had gone through an impressive weight loss, and weighed in at 534 pounds.

At that point, her next big operation was a skin removal surgery. Yet she  she still hadn’t lost enough to go through with it.

One problem was that Marla was cheating on her diet and refusing to get up and walk. She still craved the fried chicken she used to make from her bed.

Though it had been almost a year since her bypass surgery when the follow up episode aired, Marla couldn’t stand up.

“A couple of months ago, I was kind of depressed because things weren’t going as I thought they would go, but it is getting better,” she said. “I’m getting stronger.”

Marla’s biggest goal was to be able to get up and walk, then go on to remove excess skin.

“I came to Texas so I can get my life back and be here for my grandkids, but I still don’t feel like I am able to be in their lives like I should. So I can’t wait to get that surgery done,” she said in the follow up episode.

“I still have cravings, miss fried chicken,” she added. “I was trying to find a way that I can eat that, I tried using olive oil, but it don’t taste the same, and just eating meat is a little frustrating.

‘”All I can say is that I am human. You don’t have to starve yourself; you just have to make better choices.”

Sierra had helped her mom with everything over the course of many years. Then, one year after her mother’s gastric bypass surgery, she felt that she wanted to move on with her life and not be a caretaker for Marla.

Marla, of course, didn’t want her daughter acting as her caretaker either.

“I feel frustrated because if she can just get up and walk, that would be a major step for me,” Sierra said.

“I know right then and there—boom—I could just take off with my life.”

“A couple of months ago, I would have said it was frustrating sitting in this bed watching people come and go, but use that as fuel now because soon I will be out there,” Marla explained.

“I am going to the doctor’s soon, and I am hoping he will give me the go-ahead to get skin surgery.”

Claims of faking the production

Even though it seemed like Marla McCants was a hopeless case, that’s not there’s more to her than meets the eye.

In a Youtube interview with Rickey Smiley, she claimed that the production company was actually faking things and used unethical behavior in order to make the program more dramatic than it actually was.

“Like, the scene where I was in the hospital. And I wouldn’t get up. You all don’t know why I didn’t get it up. First of all, they put it out there a year ahead, when actually it was only one month after I had the gastric bypass,” Marla explained.

So how is Marla McCants doing today? Well, safe to say that she turned her whole life around – and she looks absolutely amazing!

This is Marla McCants today

In 2019, Marla appeared on the Sister Circle, where she revealed her true new self. In fact, she’s lost a staggering 580 pounds. Yes, you read that right!

Even though Marla has won the biggest fight of her life, there are many people out there still fighting. According to Marla, it’s important to not judge those people, as she knows how it feels to be like them.

”I firstly want to get out there that food is an addiction. I’m always going to have that mindset. I struggled with it,” she said.

”The way I was treated…you never want to go back there.  You should never judge a book by it’s cover. Everybody has a story, everybody has roots that they have to get to.

“For those people [who think it’s gross with people on the show], they are just ignorant,” she added. ”You can overcome your struggles and fears, you can do what I did.”

Through her Facebook page, Marla shares many photos of herself and her family. We couldn’t be any happier for her

Marla McCants’ journey on My 600-Lb Life is truly amazing. Please, share this article on Facebook with friends and family to honor her inspirational weight loss journey!