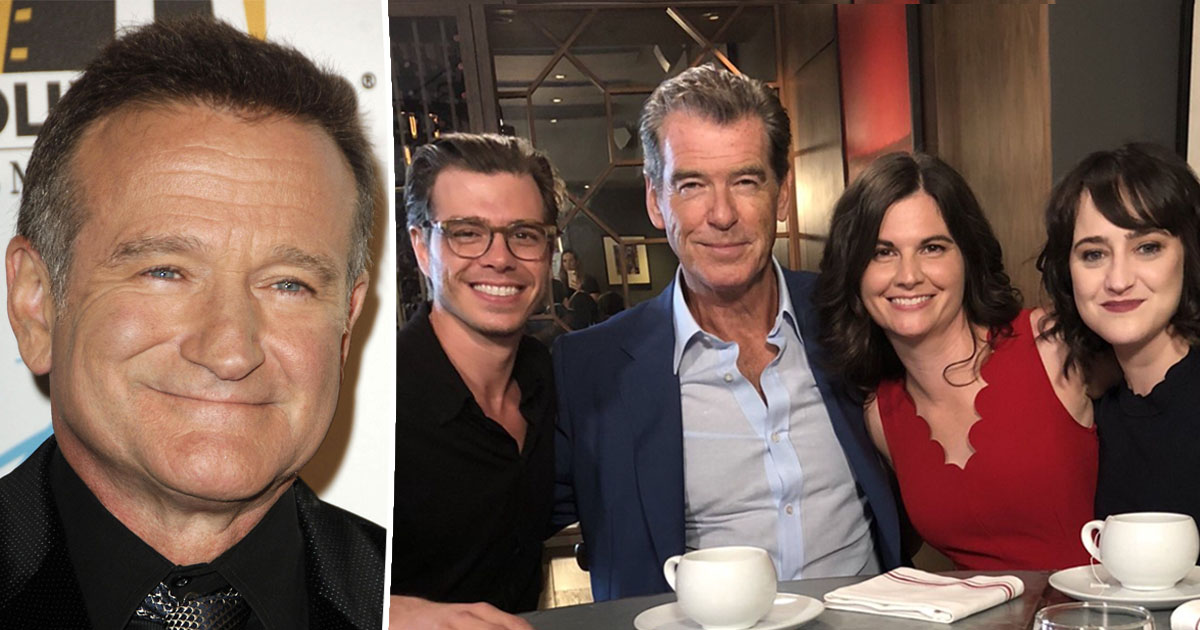 Everyone recalls Mrs. Doubtfire, a hilarious movie that made millions around the world laugh. The movie has a special place in a lot of people’s hearts.

The cast for the beloved comedy got together in 2018 on the 25th anniversary of the movie and gave an in-depth interview about everything that happened back then. The four stars from the movie talked about various things; from filming experiences to memories of Robin Williams.

Pierce Brosnan, Matthew Lawrence, Lisa Jakub, and Mara Wilson all made some interesting and heartfelt revelations.

The four shared how grateful they all were to be in the same room again since they hadn’t all been in the same room together since the premiere of the movie. Lisa Jakub said in the interview that it, “feels like no time has passed.”

Pierce Brosnan added that he could still remember meeting the young actors for the first time. He said, “I can still cast my mind back 25 years to the sunny San Francisco days and meeting you all on that particular day.”

The interviewer asked the four actors to talk about how long it took to film the iconic restaurant scene. Jakub joked that it took “like nine years.”

But in reality, the scene took a few weeks of filming. Brosnan remembered it best and said that it was a long sequence.

He recalled the scene he had done with Robin Williams with distinct clarity, saying of it, “Robin talking to my character Stu, and he was so rude about Sally’s character. Oh my God, the language that came out of his mouth. You were all dismissed when we came to do the close-ups, you were all sent off to school, and Sally was over in the corner doing her knitting… So it came time to do Robin’s close-up and my close-up and I’m sitting and Robin is here as Mrs. Doubtfire and he just unleashed the most bluest and craziest innuendos about Sally’s character and what she was up to… he pulled out all the stops.”

According to the actors, William’s unscripted delivery of lines was exactly why Pierce Brosnan’s uncomfortable reaction in the scene was so spot on.

The actors also talked about how they had a hard time not bursting out laughing during every scene because of William’s famed adlibbing which made every scene much more hilarious than it originally was.

Brosnan recalled his hilarious first meeting with Robin Williams that was unlike any other he had ever had. He said, “I went in and there was Robin in the makeup trailer and he had a Hawaiian shirt on and big hairy arms, cargo pants, big hairy legs, but he had the head of Mrs. Doubtfire. It was so bizarre.”

In an interview with GQ, Brosnan also shared details about another legendary scene from the film. In the scene, Daniel Hillard (Robin Williams) throws a lime and hits the head of Brosnan’s character, Stu, who is carrying a drinks tray to the pool.

Williams’s character does this because Stu, his ex-wife’s new boyfriend, calls him “a loser.”

After hitting Stu in the head, Hillard plays innocent and says: “Oh sir, I saw it! Some angry member of the kitchen staff – did you not tip them? Oh, the terrorist, they ran that way; it was a run-by fruiting.”

In his interview with GQ, Brosnan watched the scene again and recalled: “I get the beers, I’m walking back and thinking, ‘This is going to take forever – forever – to hit me on the head.’ The first one missed. And the second one is history.”

Brosnan also said that the “run-by fruiting” line wasn’t in the script. But, as so often, Robin Williams ad-libbed that one too.

Matthew Lawrence had an equally hilarious story about his first interaction with Williams. “They flew me and a couple of other boys to San Francisco for the screen test and they sat us down on the couch next to this lady. They didn’t tell us it was Robin. And I’m like ‘Oh come on, I got to sit next to this lady.’ And she’s moving around and I’m like ‘this is too much, where’s Robin? I’m supposed to be sitting with Robin Williams. What am I doing here?’ It keeps going on and on… During one take with him, I didn’t know it was him I thought it was Mrs. Doubtfire, he was like ‘just go along with it’… and he grabbed me and pinched me without the camera seeing, and I gave this reaction and everybody started dying with laughter. I was really confused… That single-handedly got me the job.”

The four actors shared many instances of warmness they had experienced from Robin Williams.

In this reunion interview, Lisa Jakub credited the late actor to her passion for being a mental health advocate. While Mara Wilson shared that since she was the youngest person on set, Robin made her feel safe.

Wilson said, “He was always so kind and patient with me, which was great because I was very young on the film set and there was a lot that I didn’t understand. He was very parental and very kind the whole time.”

The entire interview was lovely and filled with precious memories the cast had from the time they filmed the iconic movie.

Share this interview with your friends and family to let them know of things they never knew before about their favorite movie!