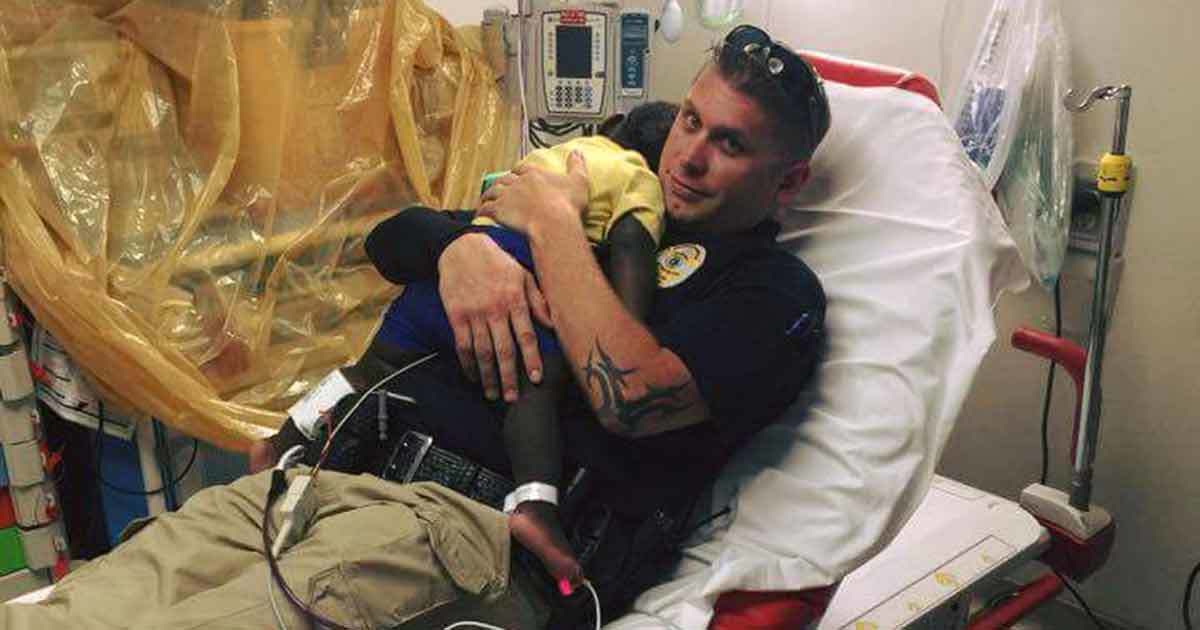 If there’s something I really admire, it’s when people far exceed the limits of what they should and must do the job to help others.

Police officers, firefighters, and hospital staff help people in different ways and they all do a fantastic job.

But some of them really do something extra, go that extra mile they don’t need to really need to cheer someone up.

A fine example of this is James Hurst, a police officer in Savannah, Georgia, who recently did everything he could to comfort a lost toddler. Now a heartwarming photo of his efforts has gone viral.

In May 2016, a 16-month-old boy was found on the streets of Savannah, Georgia, where he was walking around without supervision.

The police were called, and they escorted him to a hospital to make sure he was healthy, reports WSAV 3 News.

During the medical examination, the boy became scared and upset, but officer James Hurst stayed by his side. He picked up the toddler and comforted him.

“I just knew this child needed somebody to be there for him. It was just human instinct; humanity. The hospital staff was taking great care of him [but] he was sobbing and crying. I picked him up and within minutes he was asleep on my chest,” James Hurst told KTLA 5.

The precious moment was captured on camera and then posted on the police department’s Facebook page. And over 10,000 people have liked the picture already this week.

Several media outlets have reported on the event and many people have praised the officer’s efforts. Hurst himself said that he was just doing his job.

People everywhere were touched by officer Hurst’s kindness, but Hurst believes he was only doing what was right and doesn’t think he did anything special!

“It’s what we do, every single day, not just me, but the 600 officers that are on this department,” he told WSAV 3.

“Out of the countless times I have seen Officer Hurst out on the streets, every single time he has gone above and beyond his line of duty. If any of you get the opportunity to meet him please shake his hand, he’s … a deserving soul.” someone wrote, according to KTLA.

The toddler has been handed over to social services and is safe and was in good condition, according to police.

Even though this story is a few years old, I couldn’t help but share it again with you. It shows a true blue hero that went beyond his duty to comfort a child in a scary situation – we need more stories like these in our facebook feeds!

If you were moved by this photo, please share to show your appreciation for Officer Hurst and all other officers who go above and beyond the call of duty.