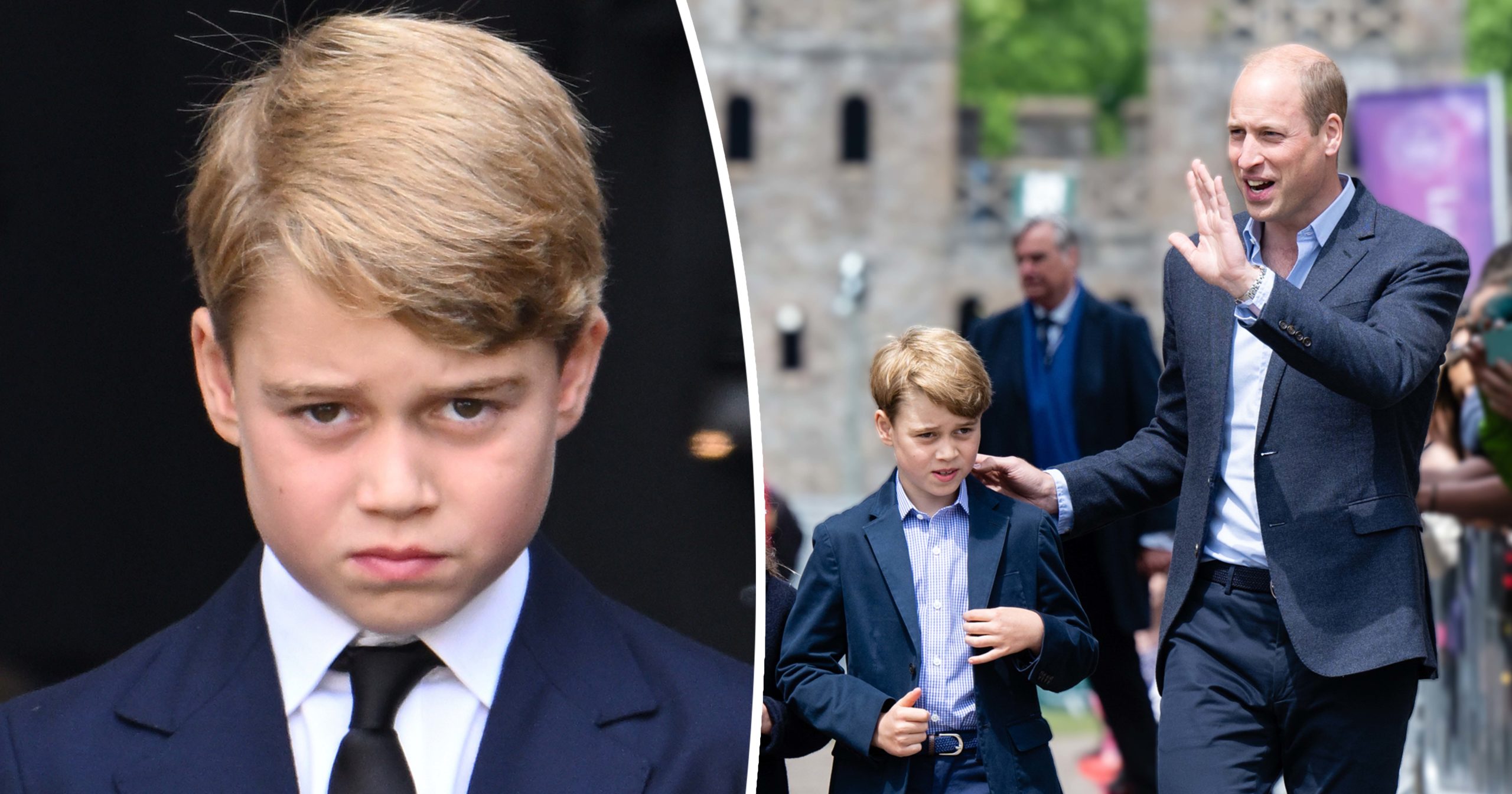 Prince George and his siblings are returning to everyday life after the mourning period for his great grandmother, Her Majesty the Queen. After her passing, George, 9, is now second-in-line to the throne behind his father, Prince William.

Even though the young Prince isn’t even ten years of age yet, he’s aware and understands the role and importance of being a royal – and, more importantly, the enormity of being a king.

At the same time, it seems like George might be starting to take advantage of his position in the line of succession. According to a royal expert, he’s even warned his friends at school, telling them to “watch out.”

The Royal Family is now returning to work following the mourning period of Queen Elizabeth. For the youngest members, that means going back to school.

The funeral for the Queen was held last Monday. Following the State Funeral, her coffin traveled from Westminster Abbey to Wellington Arch in Procession. From Wellington Arch, the coffin went to Windsor, and once there, the hearse continued in Procession to St. George’s Chapel, Windsor Castle, via the Long Walk. At St George’s Chapel, another funeral service was held.

The Choir of St George’s Chapel sang during the funeral service at St George’s Chapel. Then, before the “final Hymn,” Queen Elizabeth’s imperial state crown, the Orb, and the Sceptre was removed from her coffin and placed on the altar.

King Charles put his mother’s Company Camp Colour of the Grenadier Guards on her casket before The Lord Chamberlain broke his Wand of Office and placed it down.

As Her Majesty’s coffin was lowered into the Royal Vault and the guests sang God Save The King, Charles was visibly emotional, fighting back the tears. Later on Monday evening, a small, private burial service was held, with only the closest family in attendance and away from the clicking of cameras.

Before the funeral, King Charles addressed the nation, thanking the public for their fantastic support. The monarch said he and Camilla – the Queen Consort – were “moved beyond measure” by everyone paying their respects.

“Over the last ten days, my wife and I have been so deeply touched by the many messages of condolences and support we have received from this country and across the world,” King Charles wrote.

For the first time, Prince George – the future king – and his sister Princess Charlotte appeared during a royal funeral (they were too young to attend the funeral of Prince Philip last year).

George and Princess Charlotte actually walked behind the Queen’s coffin as part of the solemn procession in front of the hundreds of guests at Westminster Abbey. The two young royals were seen alongside their parents, William and Kate, walking just behind King Charles and Camilla, and in front of Harry and Meghan.

George and Charlotte arrived at Westminster Abbey alongside Camilla, Queen Consort, and their mother, Kate. The young prince was dressed in a dark navy suit along with a black tie; his sister in a black coat dress.

Attending a funeral is tough for anyone, but the two royal siblings stuck together and comforted each other. Kate held her daughter’s hand before the service, and at one point during the funeral, she comforted George with a hand on his knee.

By all accounts, though they are still very young, Charlotte and George know exactly what’s expected of them.

William and Kate give their children as much normality as possible

When the two children waited for the Queen’s coffin to pass them at Wellington Arch, a camera caught Charlotte giving her brother instructions.

“You need to bow,” she is reported to have said.

On the day of Queen Elizabeth’s passing, as her doctors began worrying about her deteriorating health, senior royal family members traveled to Balmoral in Scotland to be at the Her Majesty’s side. Prince George and his siblings were in school at the time, but as the royal tragedy unfolded, Kate Middleton left Windsor alone to pick up her children.

Now, losing a family member is extremely hard, I think we can all agree. As the Royal Family prepared for the funeral of Queen Elizabeth, Kate and William did everything they could to give their children as much continuity and normality as possible.

That included them continuing to go to school as usual. In an interview with People, school teacher Elaine Gee from Woking, England, recalled her conversation with Prince William on how he and Kate handled the situation.

“Catherine thanked me, and she said that all the nation were feeling it,” Elaine added. “They were both very kind and gentle and genuine. It was very special—definitely a moment I will always treasure.”

William and Kate’s three children – George, Charlotte, and their youngest son, Louis – have official titles as Princes and Princesses. When on official royal duties with their parents, they will always be referred to by their royal titles.

However, at school, it’s an entirely different thing. According to Hello Magazine, George and Charlotte aren’t referred to by royal titles there.

Instead, they go by George Cambridge and Charlotte Cambridge. It’s a nod to their parents’ former titles, with William and Kate Middleton having been the Duke and Duchess until Charles became King. Moreover, it’s been reported that George’s classmates at Thomas Battersea School call Prince George only “PG,” his initials.

Of course, it isn’t the first time royal children have taken names. Both Harry and William used the same type of names in the military and school, being referred to as William Wales and Harry Wales. Their father, Charles, was the Prince of Wales; their mother, Diana, was the Princess of Wales.

At the end of August, Kate and William announced that their kids were moving from their London schools to Lambrook School in Windsor.

“Their Royal Highnesses are hugely grateful to Thomas’s Battersea where George and Charlotte have had a happy start to their education since 2017 and 2019 respectively and are pleased to have found a school for all three of their children which shares a similar ethos and values to Thomas’s,” a statement read.

It isn’t just any school the royal children will attend. Lambrook has a tradition of royal pupils, as two of Queen Victoria’s grandsons, Prince Christian Victor and Prince Albert of Schleswig-Holstein, were students there.

It definitely provides a privileged education, too, with the annual fee for all three royal children estimated to be around $56,000, according to the BBC.

The school – which sits on 52-acres of countryside and has a nine-hole golf course, as well as a swimming pool – says it aims to create “happy and thoughtful young adults who are global citizens.”

While some students live on campus, George, Charlotte, and Louis will attend classes during the day and head back home in the afternoon.

George told classmates to “watch out”

Starting a new school can be nerve-wracking, no matter if it’s the first day of kindergarten or going to university. A new environment comes with new expectations, and then there’s the matter of making new friends.

For Prince George, making friends doesn’t seem to have been a problem. Not only that, but he’s already made sure his classmate know who he really is. In her book, The New Royals, author and Vanity fair royal correspondent Katie Nichol explained that George already understands the monarchy and his family’s role in it.

And at school, George has reportedly already warned his classmates to “watch out,” as his father is the heir to the throne.

“They are raising their children, particularly Prince George, with an awareness of who he is and the role he will inherit, but they are keen not to weigh them down with a sense of duty,” Nichol wrote, per Express.

“George understands he will one day be king and as a little boy sparred with friends at school, outdoing his peers with the killer line: ‘My dad will be king so you better watch out.'”

Do you think Prince George will make a good king after his father?