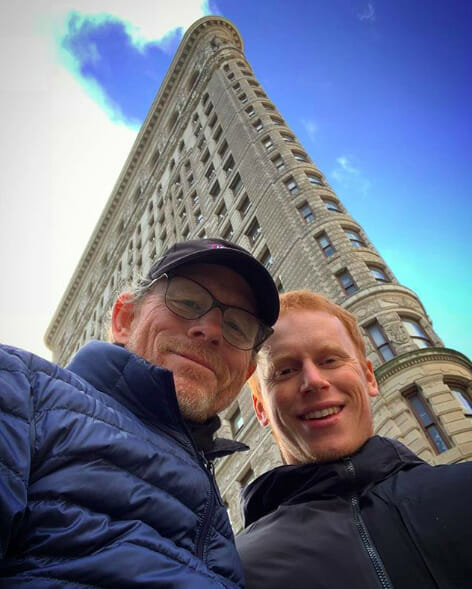 Ron Howard might still exist in the minds of many people as a child or a teenager, having been a famous child star.

It’s easy to forget that Howard, who shot to fame as Opie Taylor in The Andy Griffith Show and later played Richie Cunningham in Happy Days, is now 65-years-old.

Over the years, Howard made a name for himself as an actor, before eventually transitioning to directing.

It was in this capacity that he’s had arguably his biggest successes, with his credits including the likes of Apollo 13, A Beautiful Mind, The Da Vinci Code and Solo: A Star Wars Story.

Away from the big screen, Howard married his teenage sweetheart, Cheryl in 1975.

In 1981, the couple welcomed their first daughter, Bryce Dallas Howard, to the world.

Ron and Cheryl would go on to have three more children together – a set of twins, Jocelyn and Paige, in 1985 and then son Reed in 1987.

Acting out of caution, Howard and his wife always did their best to ensure their children were kept out of the searing glow of the spotlight.

They wanted their brood to enjoy as normal a childhood as possible, without the distractions and stress that ultimately come with growing up in the media’s eye.

Reed Howard grew up in Banksville, NY, together with his three older sisters.

A talented golfer, Reed attended the Heritage Academy High School. He later became a professional golfer and the creator of Steadhead Training Aid, a tool designed to give your golf swing more stability.

As mentioned, Ron Howard is best-known for his role as Richie Cunningham in Happy Days – but also for his bright, red, ginger hair.

And it seems like his son, Reed Howard, definitely inherited some of the ginger genes from his father…. Some claim he look just like his father’s real-life twin and I must say that I am willing to agree!

According to TVShowstars, Reed is a married man.

This occurred all of a sudden, as Ron posted the image on his Facebook account. From there, we learned that Reed was married to his spouse Ashley in 2015.

It seems that Ron and Reed have a very nice relationship, at least if we look at the pictures that Ron posts on his official Instagram page.

This photo below was taken around Christmas last year, in New York City.

“@reedchoward and I in a very busy #NYC #flatirondistrict Hoping you all are connecting w/Family & Friends this holiday season,” Ron captioned the photo.

In April, Ron had the honor of announcing that he had become a grandfather.

”Aspen Leigh Howard was born yesterday!@reedchoward and Aspen’s mom @ag_howard are feeling blessed and elated. So are the grandparents!”

Ron also took the opportunity to congratulate his son on Father’s Day.

Personally, I definitely see a family resemblance even if they are not at all identical.

Be sure to SHARE this article if you loved these photos of Ron Howard’s son!