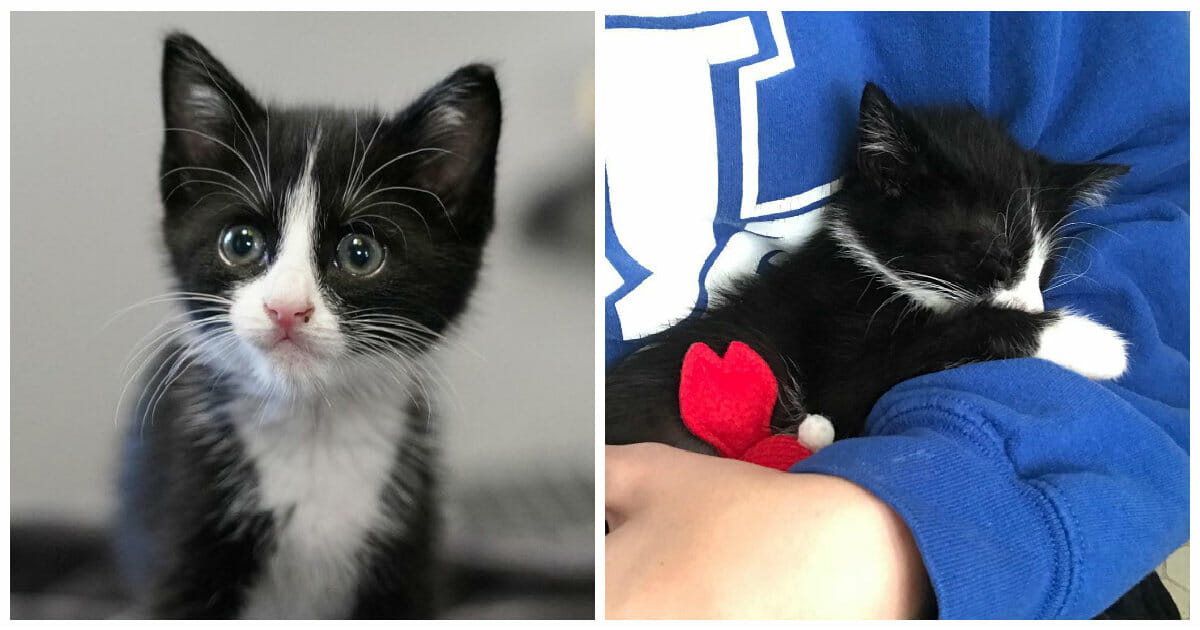 A frightened, lonely kitten got a second chance at life thanks to the help of some kindly strangers.

Back in September, a woman named Lindsay was at home Brooklyn, New York when she spotted a skittish little animal enter her backyard.

It was a young, tiny tuxedo kitten, all on her own.

However, when Lindsay tried to approach the kitten, she ran off.

But days later, the kitten returned… and this time, she was ready to accept her help. Lindsay took her inside, and realized she was in poor condition, underweight and covered in fleas. Lindsay gave the kitten a meal, and things started to change.

“After a couple hours and a full belly, she warmed right up to us,” Lindsay told Love Meow.

Lindsay reached out to a local Brooklyn-based rescue called Flatbush Cats, who took over the cat’s care, giving her the proper medical attention she needed.

The rescuers gave the cat a bath to treat her fleas. “When you are bringing in kittens under eight weeks, they all need a proper bath with Dawn dish soap and flea comb follow-up,” Will of Flatbush Cats told Love Meow.

“She is safe, clean, comfy, and flea-free. She’ll never be alone or hungry again, and the rest of her days will be filled with love.”

The shelter named the cat Pepper.

Pepper was then fostered by a volunteer named Amelia, who gave her a home for a few weeks. Her health returned, and as she grew she gained more and more confidence.

Then in October, Pepper found a forever home. It sounds like this kitten had a very happy ending: Flatbush Cats describes her new mom as “spoiling [her] with tons of love, toys and treats.”

She even has a “big brother,” another cat named Brewski.

“Brewski was very excited to have a new little sister and he’s been taking great care of her,” the shelter wrote. “It makes us so happy to see lil’ Pep running the show already; I hope this warms up your day a little bit too.”

Sometimes you just need to depend on the kindness of strangers. It sounds like this kitten walked into the right backyard that day, putting her on the path from abandoned stray to beloved pet.