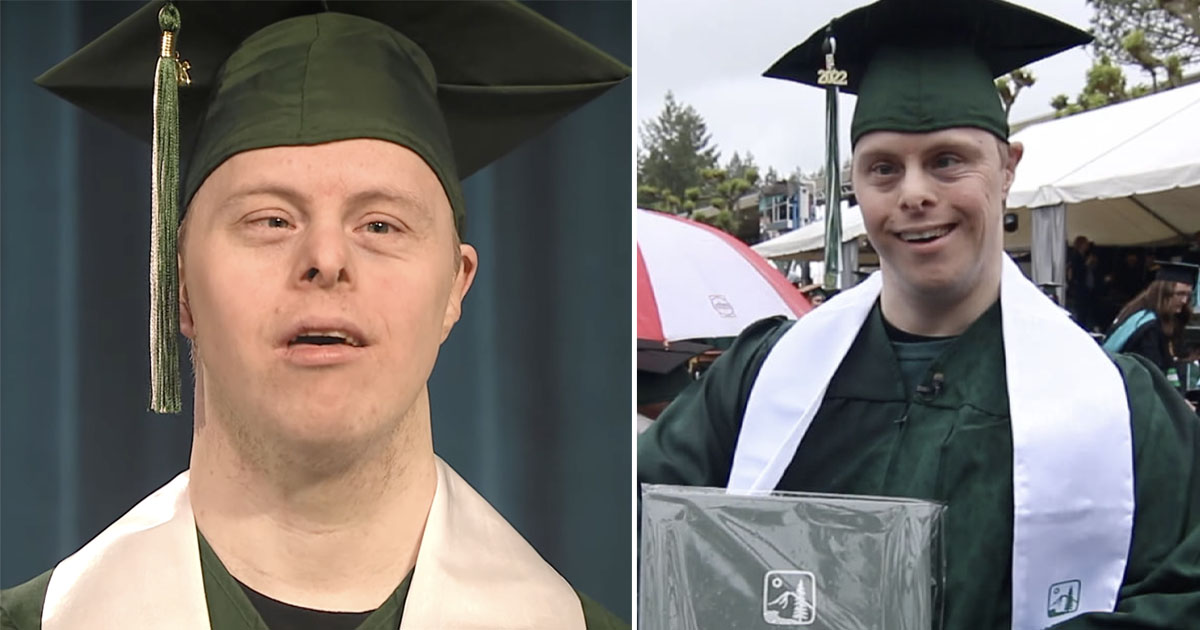 In 2022, the world has learned time and again not to judge a book by its cover. And often we come across examples of human beings who show us that the sky is the limit!

Dylan Kuehl is a 38-year-old man from Olympia, Washington. He had one goal in life; to graduate from college. However, unlike most people, the road to this goal was not easy for Dylan. This is because Dylan was born with Down syndrome.

Down syndrome is a genetic condition where a child is born with an extra chromosome which can cause developmental delays and intellectual disabilities in a child.

So the road for Dylan to graduate from college was much tougher than what other people have to go through. But he was determined and put in the hard work. Today he is a graduate of The Evergreen State College!

When he was applying to college, he heard a lot of discouragement from those around him but he did not let that deter him. He simply surrounded himself with people who supported and encouraged him. He made sure to mention those people in this speech at graduation. Dylan was the three in 900 students selected to speak at graduation.

Dylan has a lot of activities he enjoys particularly painting and dancing. And now Dylan has a Bachelor of Arts in writing.

Dylan became the first person with Down Syndrome to graduate from his college in the 51 years the institution has been around. He paved the way for future scholars with disabilities who dream of graduating from college as well!

Dylan made sure to thank everyone who supported him in his dream, in particular, he thanked his family, friends, other classmates, and faculty members.

“All of our hard work, dedication, and never giving up has brought us to this point,” Kuehl said in his speech.

He also made sure to thank his college for being inclusive and giving him admission to their institute, hitting home the point that everyone should have a chance at higher education.

But he made sure to make it clear that his degree was a result of his “hard work and dedication,” which no one could take away from him.

He hopes his journey will inspire others like him to apply to colleges and graduate.

Dylan Kuehl really is an inspirational man! We wish him the very best for his future endevours.

Share Dylan’s inspiring story with your friends and family!