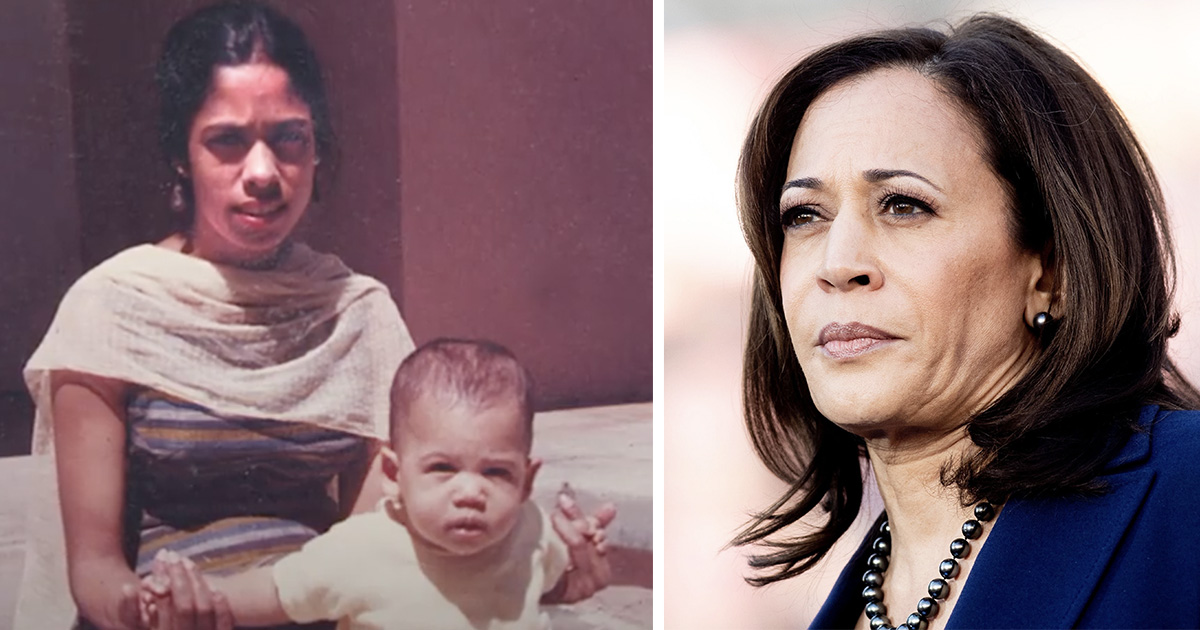 Kamala Harris’s journey from California prosecutor to the vice presidency is truly inspirational. On her way to the White House, she’s had the support of millions of Americans, as well that of friends, colleagues and, of course, her family.

But Harris’s story started at a young age, with her mother Shyamala Gopalan, a pioneering woman, activist and doctor who taught her children important values. Sadly, she passed away in 2009.

Harris has called her mother “her greatest influence”, but who was she? This is the story of Kamala Harris’s mother, and how she played a vital role in the newly-elected Vice President of the United States’s career.

It was just hours before the inauguration that Vice President Kamala Harris took the time to pay tribute to the one woman who helped her more than anyone to the second highest position in the US government.

Posted on Twitter, Kamala Harris said that her mother, Shyamala Gopalan Harris, was the person responsible for her incredible success.

“When she came here from India at the age of 19, maybe she didn’t quite imagine this moment,” Harris said. “But she believed so deeply in an America where a moment like this is possible.”

Kamala Harris’s story is nothing if not inspirational, but it all started with her parents immigrating to the United States. Just as her daughter is, her mother was keen on pursuing her dreams no matter what. In 1958, Gopalan left India for the United States to study biochemistry. Around the same time, Donald Harris left Jamaica for the U.S.

At that point, they didn’t know each other. But as both pursued doctorate degrees at the University of California Berkeley, their paths intertwined and they fell in love.

Kamala Harris’s mother has been the vice president’s biggest inspiration, and Gopalan’s story is truly amazing. This is all you need to know!

Shyamala Gopalan had plans beyond simply staying in India.

She was born in Madras (now Chennai), India and her father was a civil servant, which would later inspire her in her own life, as well as that of daughter Kamala.

Shyamala was very interested in hard science, but it wasn’t a course offered at her Delhi’s Lady Irwin College for women, which was founded by India’s British colonial rulers. Instead, she had to settle for her undergraduate degree in home science, studying nutrition, as well as homemaking skills.

“My father and I would tease her about it,” her brother, Gopalan Balachandran, told the BBC. “We’d ask her, ‘What do they teach you there? How to lay the table? Where to place the spoon?’ She’d get very angry with us.”

At 19 years of age, Shyamala decided to leave her home country of India. Following her graduation from Delhi University, she received a scholarship to go and study at University of California Berkeley in 1958, where she received a doctorate in nutrition and endocrinology.

“Father had no problems with her going abroad, but he was worried because we didn’t know anyone in the US,” Balachandran recalled. “But he believed in the importance of education so he let her go. She had received some scholarship and he agreed to support her for the first year.”

Educated in the US

During this time, she couldn’t call her parents, since they didn’t have a cell phone. The only way they could communicate was through handwritten letters, and despite the fact that they arrived weeks after they’d been written, the family remained very close.

In her memoir The Truths We Hold, Kamala Harris wrote about her mother’s journey to the US.

“It’s hard for me to imagine how difficult it must have been for her parents to let her go,” Harris writes.

“Commercial jet travel was only just starting to spread globally. It wouldn’t be a simple matter to stay in touch. Yet, when my mother asked permission to move to California, my grandparents didn’t stay in the way.”

Heading to the US in the late 1950s, it was a special time. The civil rights movement was reaching its peak, and Berkeley’s campus was pretty much the center of protests against racial discrimination. Gopalan knew that she wanted to change the world. She joined the protests and became a civil rights activist.

In India during her teenage years, Gopalan had noticed how people were separated, since girls and boys sat on separate sides of the classroom.

“But she wasn’t shy about speaking to boys. She was confident,” Gopalan’s classmate Professor. R Rajaraman recalled.

Shyamala Gopalan wanted to change the world. She came from a society where colonialism had been widespread and affected many, through which she had a deeper understanding of the struggles that African-American students had in the US. Her activism changed her life, and in 1962, she met Kamala Harris’ father, Donald Harris.

“My parents marched and shouted in the Civil Rights Movement of the 1960s. It’s because of them and the folks who also took to the streets to fight for justice that I am where I am,” Kamala Harris wrote in an Instagram post.

Following the end of Gopalan’s studies, she was expected to return home to an arranged marriage, as had been the case for generations before her. But no, she decided to stay with her love, Donald, in the US.

He had, just like Gopalan, travelled to the US from another country, in order to study economics at Berkeley. Speaking with the New York Times, Donald Harris said the two met at a gathering of black students.

Shyamala had gone up to him to introduce herself.

“She was a standout in appearance relative to everybody else in the group of both men and women”, he told New York Times,

Just as Gopalan, Harris, now 82, came from another British colony. And his future wife’s views on the world and the colonial system was something that caught his eye.

“This was all very interesting to me, and, I daresay, a bit charming,” Donald Harris explains. “At a subsequent meeting, we talked again, and at the one after that. The rest is now history.”

The couple wed just a year later. On October 20, 1964, they welcomed Kamala Harris at the Kaiser Hospital in Oakland, California. Shyamala Gopalan went on to work as a breast cancer researcher. Donald Harris, meanwhile, worked as an emeritus professor of economics at Stanford University.

The name Kamala means “lotus” in the language of Sanskrit, and her middle name, Davi, translates to “goddess”. It was all in all a tribute to the Hindu religion.

When Kamala was in elementary school, her parents divorced. Their mother raised her and sister Maya, while they saw their father on weekends, holidays and in the summer.

Harris recalled her upbringing being a lot of discussions around the dinner-table, many about the civil rights movement. The Vice President was present at civil rights protests as a young child.

Harris has in past relayed the story of when her parents pushed her in a stroller as they marched for civil rights, and she was amongst those joining in the protests. Shyamala asked: “what do you want. Kamala?”.

“When we were growing up the notion of justice and public service and a commitment to civil rights were not abstractions,” Harris said. “They were completely a part of our lives, of who we were and who we are.”

During her upbringing, their mother Shyamala travelled all over the world with the girls. They frequently visited family in India, Europe and the Caribbean.

Harris and her sister were taught early on about education, family values and public service. They weren’t allowed to watch TV unless they were doing something else at the same time.

“This whole thing of multi-tasking was ingrained early on,” Harris explained, laughing.

“I was raised that, when you see a problem, you don’t complain about it, you go and do something about it,” Harris said in a Good Morning America interview.

Kamala Harris has always had the support of her parents, and especially so her mother. During the district attorney’s race of 2004, Gopalan worked at Harris’ campaign headquarters.

After she did her research at Berkley’s Department of Zoology and its Cancer Research Laboratory, Gopalan went on to work in France and Italy, before heading to Montreal, Canada, where Kamala also went to high school.

Later, she returned to the Lawrence Berkeley Lab in California.

Shyamala Gopalan’s boss at the lab, scientist Joe Gray, described her as “a very serious scientist, quite willing to engage in scientific give-and-take during discussions”. Sadly, she was diagnosed with colon cancer.

Gopalan was very open with her own cancer diagnosis. But as her cancer spread, she wanted to return to India to spend the rest of her life alongside her mother and sister. Unfortunately, she wasn’t able to make the trip.

“I thought it was like a romantic notion of being in touch with her heritage at that stage of her life,” her longtime friend Aubrey LaBrie said.

“Among other things, I said, ‘Shyamala, I’m glad to hear you are going back to India.’ She said, ‘Aubrey I am not going any place.’ She died shortly after that,” he added.

On February 11, 2009, Shyamala Gopalan passed away, age 70. She became known all over the world for making significant discoveries about the role of hormones in breast cancer.

Kamala spoke about her mother upon accepting her vice president nomination. Harris stated that her mother’s life wasn’t at all easy, juggling working around-the-clock, performing cancer research, and taking care of her daughters at the same time.

Ahead of the inauguration ceremony, Kamala honored her mother with some truly wonderful – if not heartbreaking – words.

“To the woman most responsible for my presence here today: my mother, Shyamala Gopalan Harris, who is always in our hearts,” Harris said.

In an accompanying video, several pictures of Kamala’s mother were featured.

“So I am thinking about her and about the generations of women, Black women, Asian, White, Latina, Native American women, who throughout our nation’s history have paved the way to tonight,” she added.

“Women who fought and sacrificed so much for equality and liberty and justice for all. Including the Black women who are often, too often overlooked but so often proven they are the backbone of our democracy.”

Kamala Harris’ mother Shyamala Gopalan was truly an incredible woman. Not only did she help and support other people by protesting, she also raised a wonderful daughter with values that she was important.

It’s easy to say that Shyamala did very well, both as a mother as well as a scientist. For that, we thank her!