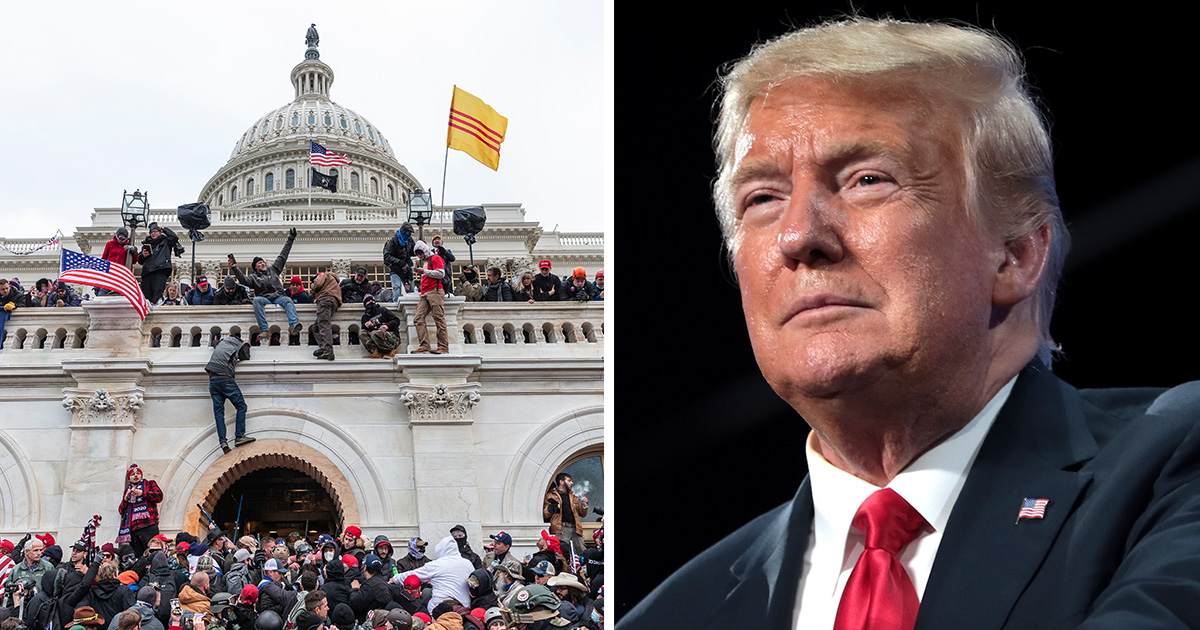 Donald Trump watched on as his impeachment trials moves forward. However the former president doesn’t have any remorse regarding the siege of the US Capitol, a source tells CNN.

The second day of Donald Trump’s impeachment trial came to an end Wednesday, with chilling video footage becoming one of the trial’s key exhibits.

The former president has had a hard time hanging on to lawyers to represent him in the historic second impeachment trial. His legal team, led by impeachment lawyer Bruce Castor alongside attorney David Schoen, had only days to prepare for the trial, but following the first day, it seemed like people close to Trump already had grown tired.

Trump was reported to have been “furious” and “beyond angry” over Bruce Castor’s efforts in his opening statement, sources told CNN and Fox.

Watching the trial from his Mar-a-Lago estate in Florida, CNN sources said Trump was “almost screaming as Castor struggled to get at the heart of his defense team’s argument.” When his lawyers also decided to switch speaking slots at the last minute, Trump was “flabbergasted.”

Now, after the second day of trial, some in the former president’s closest circle says he should fire his lawyers, the Associated Press reports.

Following the first day of the trial – focusing on arguments regarding if it’s constitutional to proceed with Donald Trump’s impeachment trial – the second day focused on more, graphic highlights.

House Democrats showed new searing footage of the U.S Capitol riots, painting the picture of Trump being “the inciter in chief.”

Further, the lead impeachment manager, Rep. Jamie Raskin, D-Md, said Wednesday that Trump systematically riled up his supporters, falsely convincing them that the election was stolen.

“He assembled, inflamed and incited his followers to descend upon the Capitol,” Raskin said.

A source close to Trump – who has discussed the impeachment case with the former president – told CNN that the facts for him are “really bad.” Also, the source laughed when asked if Trump had any remorse for the siege on the U.S. Capitol.

Trump’s rhetoric was central during the second day of the impeachment trial, with the impeachment managers saying he laid a ground to the riots in his speeches several months before.

“He truly made his base believe that the only way he could lose was if the election were rigged,” Rep. Joaquin Castro, D-Texas, one of the prosecutors, said.

“This attack never would have happened but for Donald Trump,” said Rep. Madeleine Dean, D-Pa said. “And so they came, draped in Trump’s flag, and used our flag, the American flag, to batter and to bludgeon.”

The impeachment management showed a new, chilling security video of last month’s riots at the U.S. Capitol, including footage of rioters searching the Capitol for House Speaker Nancy Pelosi as well as Vice President Mike Pence. In one of the videos, one person could be heard trying to violently locate Speaker Pelosi.

Sen. Susan Collins, a republican from Maine, described the atmosphere during the presentation was “extremely quiet”

“It was reliving that day with some additional detail that just reinforces my belief that it was a terrible day for our country and that there’s no doubt that it was an attempt to disrupt the counting of the electoral votes,” Collins told CNN.

“I’ll always be grateful to law enforcement and the Capitol police for protecting us, but also proud of the fact that we came back that night and finished our constitutional duty, we did not let the rioters accomplish their goal of disrupting the vote,” she added.

Sen. Ted Cruz – who has stood by Donald Trump for a long time – said that the presentation was “powerful and emotional”.

However, he doesn’t think it automatically connects Donald Trump to the attack, saying that the direct link to the former president was “strikingly absent.”

So what happens next? The impeachment managers will continue making their case against Donald Trump on Thursday, with the trial set to resume at noon. Over 16 hours spread over two days, they have to convince GOP senators that Trump was indeed responsible for inciting the Capitol riot.

Do you think Donald Trump deserves to be convicted? Let us know your thoughts in the comments box on Facebook – we will always encourage healthy debate!