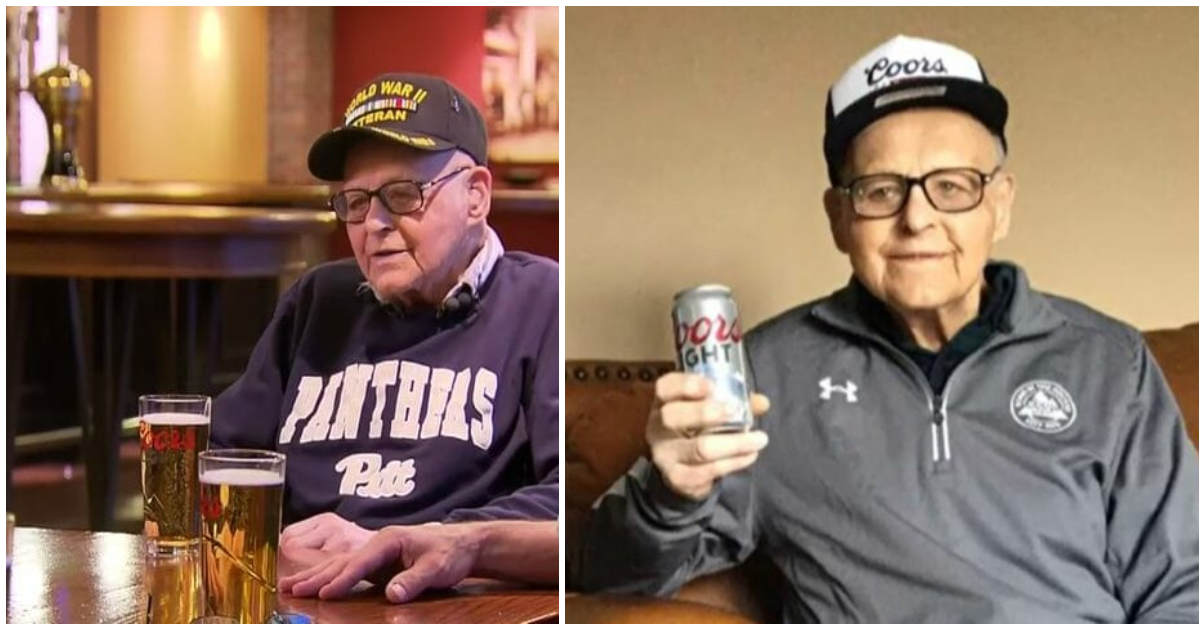 There are many healthy experts who will give you the usual tips on how to life a longer life: eat more vegetables, drink more water, etc.

But one veteran who just celebrated his incredible 103rd birthday this month has a very different strategy: just drink a beer every day!

Andrew Slavonic, a World War II Air Force vet from Pittsburgh, has become a celebrity — and a hero of beer aficionados everywhere — by religiously sticking to a schedule of a Coors Light every afternoon.

“Every day at four o’clock,” Andrew told CBS Denver in early 2019, a month after his 101st birthday. “we may miss it by a half an hour or so but we still get that four o’clock beer in.”

He says he started drinking a cold Coors Light after mowing his lawn in the afternoon, and the daily habit continued into his centenarian years.

As years continue to go by, Andrew is still going strong, one has to suspect the beer might have something to do with it: “I can sit here and drink this all day it’s like a medicine,” he told CBS.

Either way, Andrew just enjoys a cold one: “I just love to drink it… that’s all.”

He doesn’t drink alone: he shares his daily beer ritual with his son, Bob, who says his dad definitely knows how to stay young.

“They just don’t believe that he is that old but only looks like he is in his 70’s,” Bob told Fox News last year.

“He gets up at 8:30 every day and gets dressed and goes into the kitchen ready to cook his own breakfast,” Bob said. “Later, after he makes his own lunch, he goes into his home office and reads through the daily newspaper.”

Andrew is extremely loyal to Coors Light, never wavering from his brand of choice. When the company got word of their biggest and oldest fan, they gave him the surprise of a lifetime: a tour of their brewery in Golden, Colorado, where he got to have a beer right from the source.

“The look on his face was absolutely priceless,” Bob said. “I think that this is a once in a lifetime experience.”

Now, another year has passed, and on December 1 Andrew celebrated his 103rd birthday.

The world has changed a lot in the past few months, but rest assured, Andrew is still having his daily beer.

“At his 103 age, he is still drinking his daily Coors Light,” Bob told Fox News recently. “I really think that is what is keeping him going so long.”

While another brewery tour might be out of the question these days, Coors Light has continued to thank him for his loyalty with lots of branded merchandise, including a fully-stocked Coors Light fridge.

Happy birthday, Andrew Slavonic! Cheers to you and your long life!

Maybe the key to life is just enjoying a nice cold beer. Share this story if you agree!