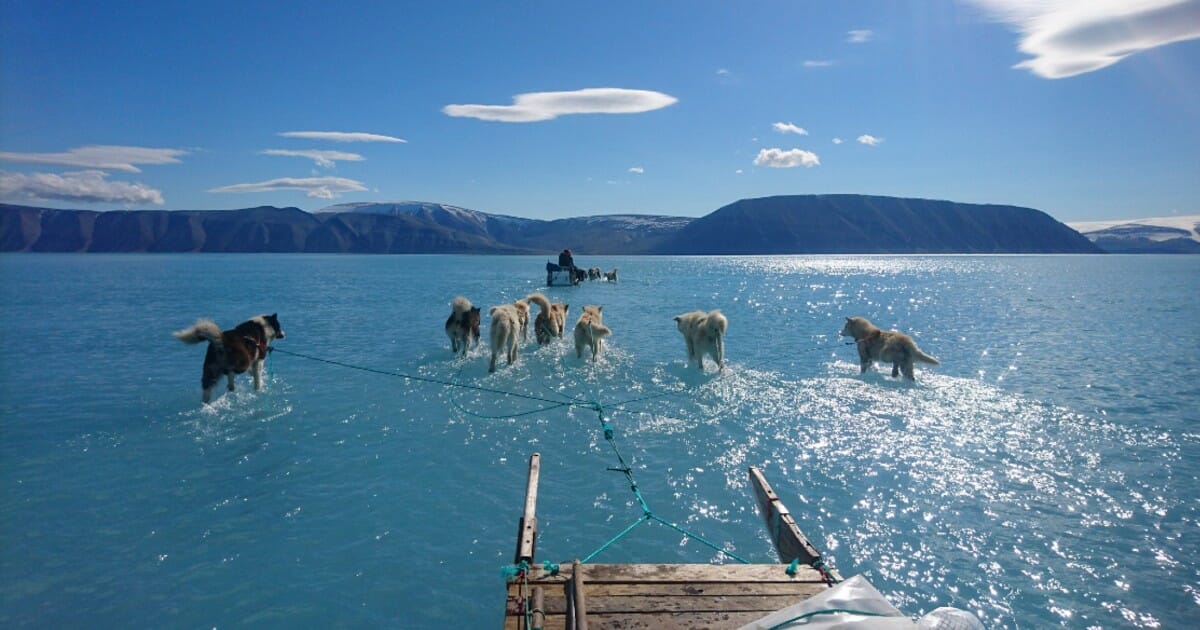 This viral photo that appears to show sled dogs walking on water is scary for two reasons: there’s only about 4 feet of ice separating the dogs from the water below, and it demonstrates the dramatic effect climate change has had on places like the Arctic.

The striking image, which was taken in the Inglefield Bredning fjord on June 13, shows sled dogs wading through ankle-deep water that covers a four-foot ice sheet.

Rasmus Tonboe shared the image, taken by a colleague, Steffen Olsen from the Centre for Ocean and Ice at the Danish Meteorological Institute, on Twitter.

Olsen was tasked with retrieving oceanographic and weather monitoring tools placed on the sea ice in the north west part of Greenland. But the team ran into an issue.

“This year the expedition to retrieve the instruments – by dog-sled, still the most practical way to get around in this region at this time of year – ran into a lot of standing water on the sea ice,” Ruth Mottram, climate scientist at the Danish Meteorological Institute, told the Guardian.

@SteffenMalskaer got the difficult task of retrieving our oceanographic moorings and weather station on sea ice in North West Greenland this year. Rapid melt and sea ice with low permeability and few cracks leaves the melt water on top. pic.twitter.com/ytlBDTrVeD

Mottram noted that typically ice forms every winter and is quite thick, which means there are few cracks for meltwater to run through. However, the area recently saw an increase in temperatures which led to “a lot of melting ice, on the glaciers and ice sheet, and on the still-existing sea ice.”

One day a weather station recorded a temperature of 62 degrees Fahrenheit, which is considered high for the summer in northern Greenland.

While these types of melting events do occur, though less dramatic, they don’t happen until late June or July. Typically meltwater drains through fractures, but that did not happen in this case.

Mottram can’t confirm the flooded ice sheet, which Olsen noted that residents in Greenland rely on every day, was directly caused by global warming, but it’s possible.

If these events continue to occur the Earth’s entire climate could change.

“That’s beginning to happen, with more severe storms, more persistent weather patterns, longer droughts; all that stuff is dependent on the fact that the ice on the ocean in the Arctic and the ice on Greenland are more or less the way they used to be, or we’re going to see big changes,” Ted Scambos, a senior research scientist at the University of Colorado, told CBS News.