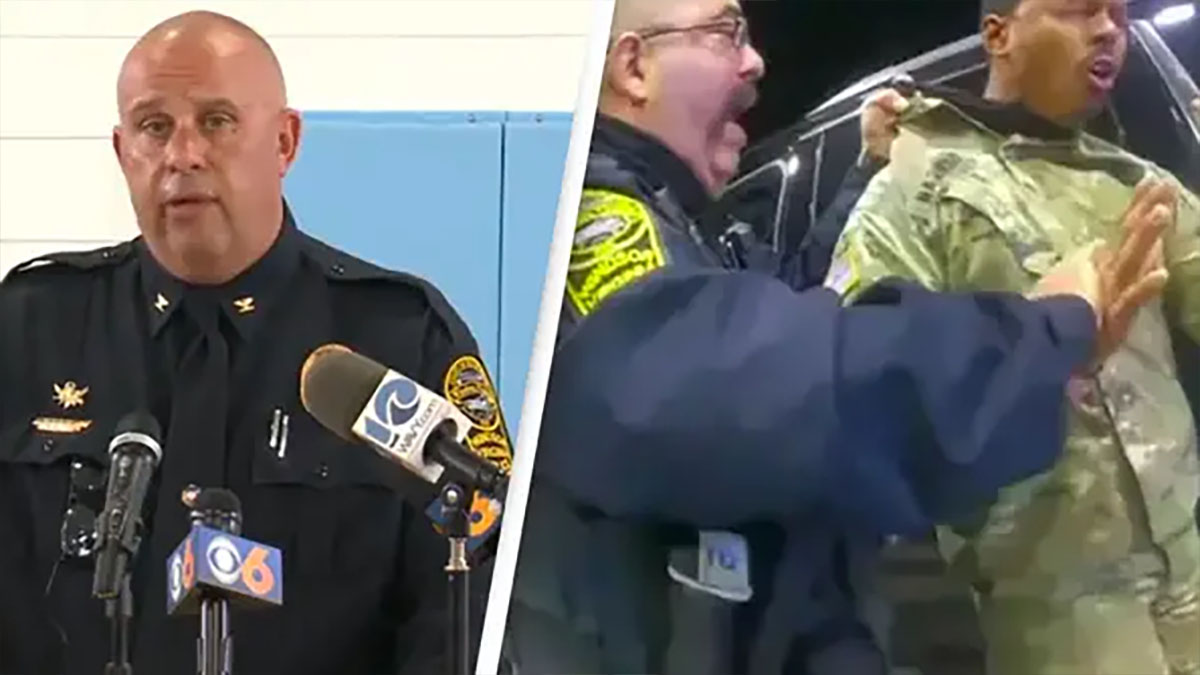 The U.S. Army officer pepper sprayed and kicked during a traffic stop doesn’t deserve an apology, according to a Virginia police chief.

Second Lieutenant Caron Nazario, who is Black and Latino, was stopped by officers Joe Gutierrez and Daniel Crocker at a gas station in Windsor, Virginia, in December last year.

The bodycam footage of the incident, which has since gone viral, shows the two officers pointing their guns at Nazario as he repeatedly asks why he’s being stopped and tells them to “get your hands off me.”

Footage shows him being pepper sprayed twice by one of the officers and then kicked after he gets out of his car, he’s then forced to the ground and put in handcuffs.

“I’m trying to breathe,” Nazario says while one of the officers orders him to get out of the car. “My dog is choking in the back.”

Nazario is suing the two officers Gutierrez and Crocker for $1 million in damages with his lawyer saying his Fourth Amendment rights were violated, as per Axios.

Officer Joe Gutierrez was fired following the December 5 incident. Following an internal investigation, the town said that Gutierrez did not follow department policy. They did not provide any further information on Crocker, but said the department is requiring additional training, as reported by CBS News.

Now Windsor Police Chief Rodney Riddle appeared at a press conference to address the incident saying he doesn’t believe the officers who accosted Nazario owe him an apology.

Riddle told NBC 29: “I can’t speak for him, but I’m gonna own up to what we did. My guys missed opportunities to verbally de-escalate that thing and change that outcome.”

When a reporter asked if Nazario should receive an official apology, he said: “I don’t believe that.” Riddle said it would have been easier if he “complied a whole lot earlier”.

He added: “Lieutenant Nazario took certain actions that created where we got to, and I think that you know… we’ll let the courts work that part of it out. At the end of the day, I’m glad nobody got hurt. That situation ended in the best way that it could have.”

Riddle also explained Gutierrez faced disciplinary action in January, but was fired after the video was released to the public. “As this thing kind of gathered legs and became viral, I personally felt there was personally no way he could effectively serve the community at that point,” he said.

Valerie Butler, president of the National Association for the Advancement of Colored People (NAACP) in the Isle of Wight, Virginia, said Riddle’s comments were “appalling” and is calling for his resignation.

“It was more about the video, not the act that he actually encountered with the officers, ” she said, as per 13 News Now, adding the officers’ actions were “horrible.”

Responding to the chief’s comments, community activist Brandon Randleman said: “It’s time for this police chief to go. How do you as a leader state that… I did not discipline someone because of their actions, I only disciplined because the whole world is watching? That’s not a leader.”

It’s difficult to understand what Nazario did wrong and what he did to warrant this appalling treatment. Officers need to be held accountable for their actions.