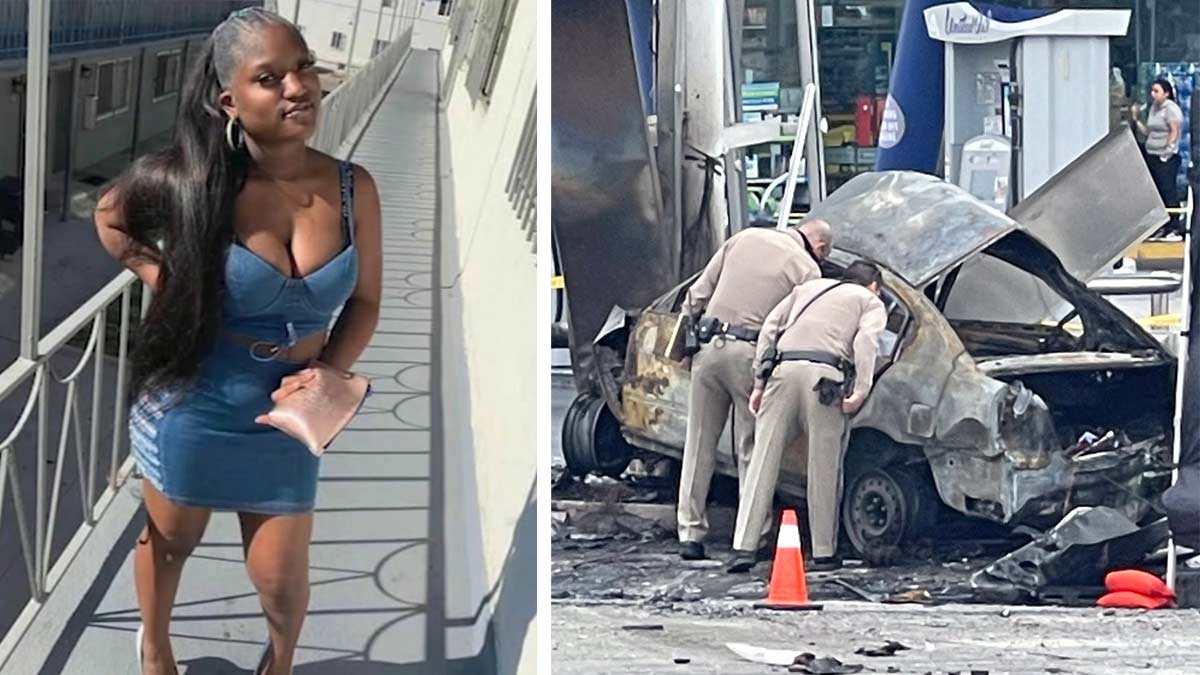 Six people are dead including a pregnant woman, her infant, and unborn child after a woman careened through a Los Angeles intersection Thursday afternoon causing a fiery crash.

The woman, Nicole Lorraine Linton, 37, who survived the crash and has since been released from the hospital has been arrested and charged with vehicular manslaughter with gross negligence.

Eight other people suffered injuries as a result of the crash.

Some of the following images may be disturbing.

According to the Los Angeles Times, Linton, a traveling nurse, was driving her Mercedes close to 100mph when she ran a red light in the Windsor Hills neighborhood of Los Angeles around 1:30 pm Thursday.

Her car hit another vehicles, which resulted in a chain reaction and trail of fire that engulfed several vehicles.

“All of a sudden, I heard a big explosion…and flames went over my whole car…I though my car was on fire,” Debra Jackson, a witness to the crash told CBSLA.

California Highway Patrol indicated that eight vehicles were involved in the fatal wreck. Among the victims were a family who were heading to a pre-natal doctor’s appointment.

Asherey Ryan, 23, who was eight and a half months pregnant, her 11-month-old son Alonzo, and her 24-year-old fiancé and father of her unborn son, Reynold Lester, were all on their way to the doctor when they were struck and killed.

“One of the workers came and saw me with the baby and took the baby out of my hands. Somebody tried to resuscitate the baby but the baby was gone.”

Ryan’s sister, Shoshanna Kerr, recalled the last conversation she had with her sister.

“She left the house at 1:30. She woke me up,” Kerr said. “She woke me up and told me she was going to go to her doctor’s appointment, that she loved me and she’ll be right back.”

Linton, along with other survivors of the crash, was transported to the hospital. The traveling nurse was released several days later and placed in police custody. Her bail was initially set at $2 million, but was later raised to $9 million.

“This tragic event has changed our family forever,” Dela Guy, Lester’s sister, said during a vigil. “Words can’t express how hurt and devastated we are. Our heartbreak is not only for Reynold but for all those involved.”

While many have expressed their deep hatred for Linton, Kerr has stated her family has forgiven her.

“I just want to tell her that we forgive her,” she said. “She will have to live with this for the rest of her life. That’s why she was spared. We understand it already.”

Words escape me when it comes to finding something to say about this horrific crash. My heart hurts so much for all of those involved.