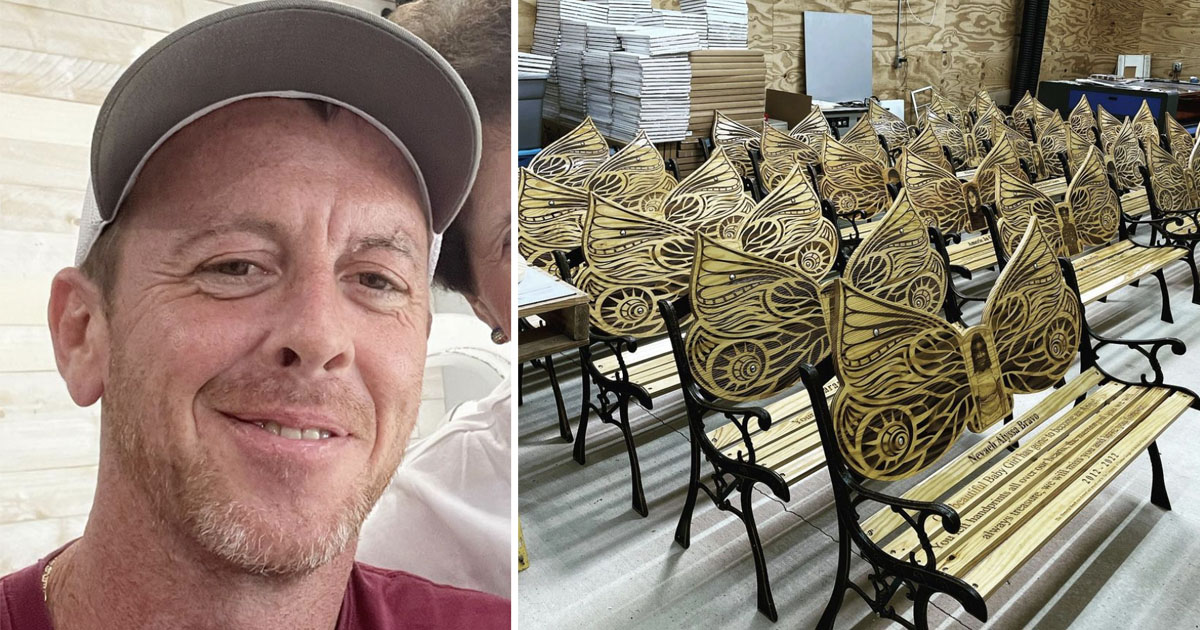 The Uvalde tragedy is something that will forever be etched in the brains of everyone. Two months on from the incident, people are still remembering the 21 lives lost on that senseless violent day.

When 19 students and two teachers were gunned down by a lone shooter in Uvalde, Texas, the entire country banded together and poured in their support. The community directly impacted in Uvalde was supported by people not just from all over America but all over the world.

Similarly, a businessman in Eastman, Georgia put everything at pause to do what he could for the lives lost and the people of Uvalde. Sean Peacock runs his own business by the name of Jass Graphix, where he provides clients with graphic art services. His specialty is custom wooden signs and metalwork.

They make a myriad of things; from custom plates to family name signs.

And they have another item which is something they are particularly known for and is unique to their business. The customers call them ‘Butterfly Benches.’

The first bench was made in 2008, which Peacock made for his mother in honor of his late sister Donna. A picture of Donna with a quote graces the front of the bench.

After the first successful bench, he started taking orders for them to make benches for those mourning the loss of a loved one.

In May this year, Peacock received a request from April Elrod. Elrod had seen his designs on Etsy and fell in love with them. She wanted a bench made for her 10-year-old daughter, Makenna who had passed away.

According to April, her daughter had adored butterflies and had even been laid to rest in a dress covered with butterflies.

“When we go visit her at the cemetery, there’s always butterflies around,” the mother said in an interview. “We’ve had butterflies in our cars and our houses, everywhere we go.”

She began creating a butterfly garden in her yard and when she saw the bench she thought it would be perfect. “I saw that butterfly bench and I thought that would be perfect [for the garden], somewhere to go sit and think about Makenna and talk to her,” she said.

She never mentioned to Peacock about how her daughter passed and just asked him to make two benches dedicated to Makenna; one for her and one for her dad.

He decided to google the family and in his own words, “Lo and behold, number one on the list, Makenna Lee Elrod, the same name that that momma used. When I discovered that, that was the beginning of it all.”

He discovered Makenna was one of the 19 students who had lost their lives in the attack on Robb Elementary School in Uvalde, Texas.

Peacock posted the bench and the moving story behind it with his family and friends on his social media. Soon the donations started rolling in with people wanting to cover the cost of the benches which retail for $1,800 each.

Peacock got the idea to make benches dedicated to each person that lost their life in Uvalde. He started a GoFundMe page to raise funds to do so and in 48 hours had hit his goal of raising $20,000.

“On the day of Makenna’s funeral, I texted the mother and revealed to her what I did. I told her, ‘Your bench is paid for your precious child, and so are 20 more.'”

In the next few days, he sent messages to the families of all the victims. He asked for pictures they would want to be displayed on the bench as well as a little about each person.

A bench typically takes 6 weeks to make, but Peacock and his team of volunteers set to work.

By early August, all the benches were finished. And the community gathered in Eastman to do a prayer service before they were loaded onto a U-haul paid for by the city to be transported to Uvalde.

Peacock was joined by Rev. Tyler Kirkley, the pastor of his church, Lakeside Assembly of God. Together they distributed all the benches.

“My prayer, my hope is that love will make a difference, and when they sit on these benches, they’ll be reminded of a love that can change the world,” Kirkley said to the media.

Hopefully, having these benches made to remember their loved ones brought smiles to the faces of the bereaved families.

What a great thing to do for people in mourning. Share this story to inspire others to be kind!