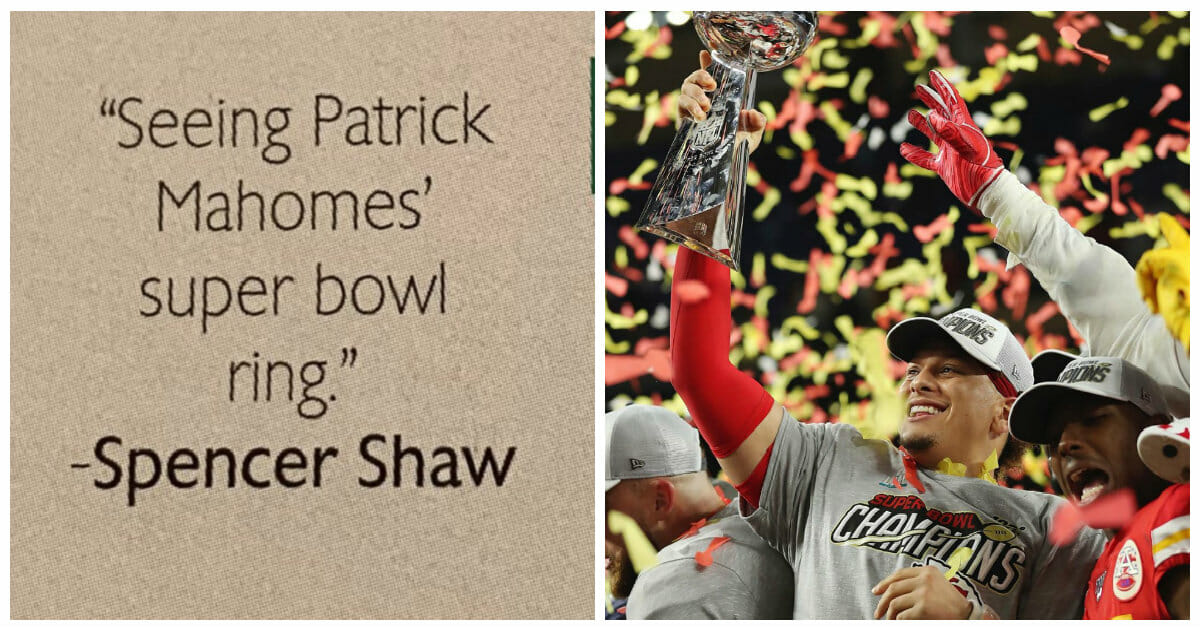 Sunday’s Super Bowl turned out to be an exciting game as the Kansas City Chiefs rallied to beat the 49ers, led by star quarterback Patrick Mahomes.

It was a historic victory for the 24-year-old, who went on to be named MVP, one of the youngest to ever receive the honor and the youngest to win both MVP and a Super Bowl title.

He’s such a fast rising star that it’s taken many people by surprise… but at least one person who predicted it all along.

Before he was an NFL star, Mahomes attended Whitehouse High School in Texas, where he played football, baseball and basketball.

His classmates clearly saw he was something special, because when asked for the yearbook “What are you looking forward to most about your class reunion?” a student named Spencer Shaw gave a bold answer:

And after the Chiefs’ victory on Sunday, Spencer couldn’t help brag that he called it:

Shaw, now a preaching minister, was friends with Mahomes back when the two were basketball teammates together.

“He was just one of those special athletes,” Shaw told the Washington Post. “You knew he was going to succeed in whatever he did because he had that ‘it’ factor and a drive to work hard.”

“If he was leaning more toward playing baseball after high school, I might’ve said that I was looking forward to seeing his World Series ring. He was that kind of special talent.”

It’s clear his fellow students believed in him from the very beginning and are proud to see their classmate doing such great things.

“He’s got that work ethic that he’s going to succeed, and he’s also the kind of guy that you root for,” Shaw told News 4. “He’s one of the best guys you’ll ever meet… He’s the kind of guy you want representing your hometown.”

The classmates graduated in 2014, which means their first class reunion would be held in 2024. Mahomes will have at least one Super Bowl ring to show off to his old classmates…

…although a few alumni are looking forward to something else entirely:

Congrats to Mahomes on his Super Bowl win… and congrats to Spencer Shaw for predicting it all those years ago! Many people bet on the Chiefs but who else can say they called it way back in high school?