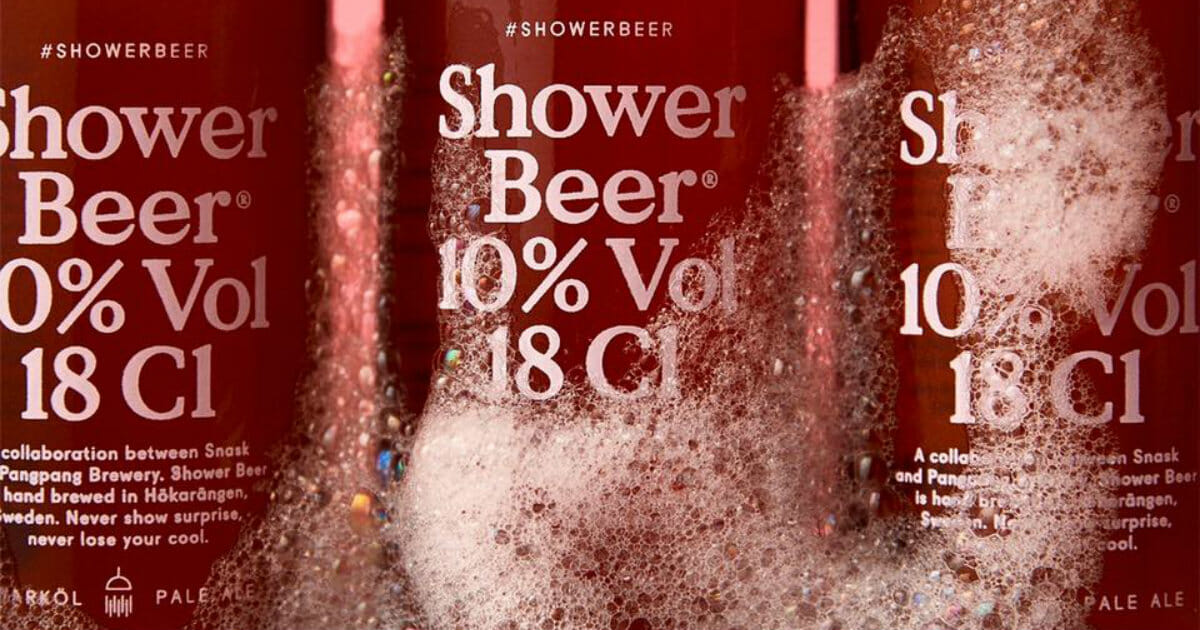 We all know how refreshing a nice cold beer can be, but did you know there are ways to make the experience even better? For example, the “shower beer” phenomenon.

Many beer lovers swear that cracking open a cold one while taking a hot shower is heaven on earth. After all, one of the only things more relaxing than kicking back with a beer is taking a shower, so why not combine the two? (And there’s science to back this up.)

I don’t give a damn how old I get.

I’m always gonna get a thrill from bringing a beer into the shower.

You can find people all over the internet posing with their shower beers. Naturally, many companies have decided to capitalize on the trend. Urban Outfitters started selling a special shower beer cupholder (a good investment, your hands might get slippery and god forbid you spill your beer.)

But one company went a step further, and created a new beer specifically designed to be enjoyed in the shower.

But that’s just if you want to drink it. Because if you have it in your shower, why not use it as a hair product while you’re at it?

According to PangPang’s site, the beer contains “enough Citra to double as a hair conditioner.” Personally, we would never condone wasting beer or putting it anywhere but down your throat, but still, it’s a cool feature.

It’s also designed to have a “soapy” flavor, so take that what you will.

“I let the Shower Beer sit longer in the primary fermenter before dry hopping and cold crashing it, compared to other PangPang beers,” PangPang brewery founder Fredrik Tunedal told Vice. “This lets it develop a soapy flavor that in some beers is considered an ‘off’ flavor, but is just on point for the Shower Beer. The beer is heavily hopped with Citra [hops], and has a citrusy, soapy, and somewhat herbal profile.”

The beer was first released in a limited batch in Sweden in 2016, but word soon spread and demand was high.

“We did this first batch that wasn’t that big. It was mostly for the Swedish market and we wanted to have it for ourselves,” Tunedal said. “It sold out so fast. There’s quite an interest in it.”

It got people talking… even Tom Hanks joked about the beer while guest hosting an episode of NPR’s Wait Wait…Don’t Tell Me!

“[It’s] perfect for people who want some hair of the dog to go along with that stuff that’s clogging their drain,” Hanks joked. “If you have enough of them, you’ll eventually be drunk enough to fall down in the shower and become another shocking cause of death statistic.”

Shower Beer: Branding & Packaging by SnaskWe have published a number of features on Stockholm-based studio Snask, but…

Posted by That Graphic Design Page on Tuesday, 16 July 2019

The Shower Beer isn’t currently available at the moment, but you can pre-order a batch for the next time it’s brewed.

But whether you’re drinking this special shower-ready brew or just your regular, everyday beer-of-choice, it’s clear that the “shower beer” idea is becoming a common pastime.

“The idea for a Shower Beer is a universal thing,” Tunedal told Vice. “As a brewer I work long and hard days, and when I come home I’m often covered in malt dust … and the shower is a gateway back to normal society.

“Looking through the hashtag #showerbeer it’s easy to see that people all over the world love that feeling of a hot shower and an ice cold beer.”

Have some friends who enjoy shower beers? Share this news with them!