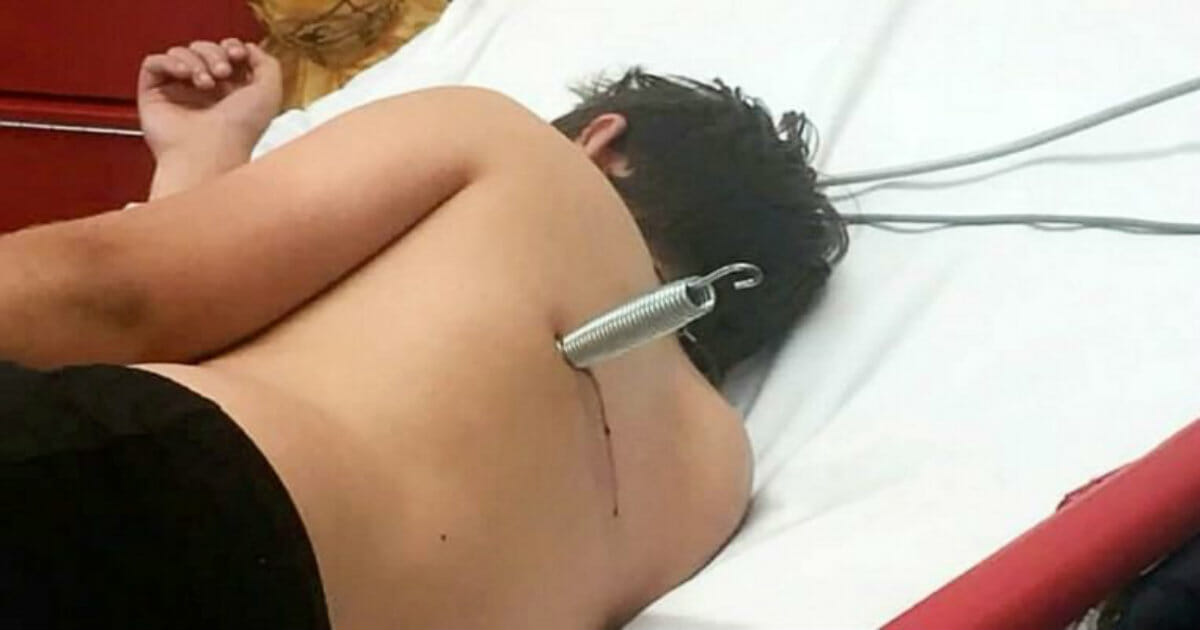 If you have kids, there’s a good chance you have a trampoline in your backyard. They can be fun, but safety is important to keep in mind. They can be dangerous: roughly 100,000 ER trips every year are due to trampoline-related accidents.

But one boy’s trampoline horror story is particularly bizarre—he survived a near-fatal injury caused by a faulty spring piercing his back.

Jamie Quinlan, a 12-year-old from Louth, England, was playing on his trampoline last week with some friends. As he told SWNS, the boy suggested they all jump at the same time.

He admits that he was “being stupid,” but no one could’ve predicted what happened next.

“Then I felt something really weird in my back,” he said. “It turned out to be a spring.”

The large metal spring had shot off the trampoline at about 70 miles an hour, and pierced the boy’s back by about six centimeters, according to the Louth Leader.

Jamie’s friends looked on in horror, and he got off the trampoline in severe pain. His parents rushed him to Louth Hospital, and he was transferred by ambulance to Sheffield Children’s Hospital.

“When I was in the waiting room there, I was really nervous,” Jamie told the Leader. “It took them about 10 minutes to actually get the spring out of my back.”

Jamie is now recovering well from the injury: “Sometimes it still feels like the spring is in my back, but I am getting a lot better and stronger now,” Jamie said. “I feel relieved that it wasn’t worse.”

He’s right: the spring narrowly missed his spine, and at that speed a hit to the wrong organ could have been fatal.

“The spring had come off the trampoline like a bullet,” Jamie’s father Ian said. “If it had hit elsewhere on Jamie’s body, in his head or throat, we could have lost him.”

“It was a terrible thing to happen, and it really scared me. It could have happened to anyone. Jamie has been so brave.”

Jamie says the doctors had never seen anything like this, but his dad still wants people to take caution with their own trampolines. The next victim might not be so lucky.

“I want people to be aware of how dangerous trampolines can be if there’s no cover on the springs, or if there’s a gap,” he said.

I’ve seen those springs fly off of a trampoline. We all just watched it fly over the top of the house.

According to The U.S. Consumer Product Safety Commission, there are unfortunately thousands of trampoline-related injuries each year. Only in 2012 there were 94,000 emergency room treated trampoline injuries.

So you can never be too safe when it comes to trampolines, and this story shows the unexpected dangers they can pose. Please share this story on Facebook to inform others.