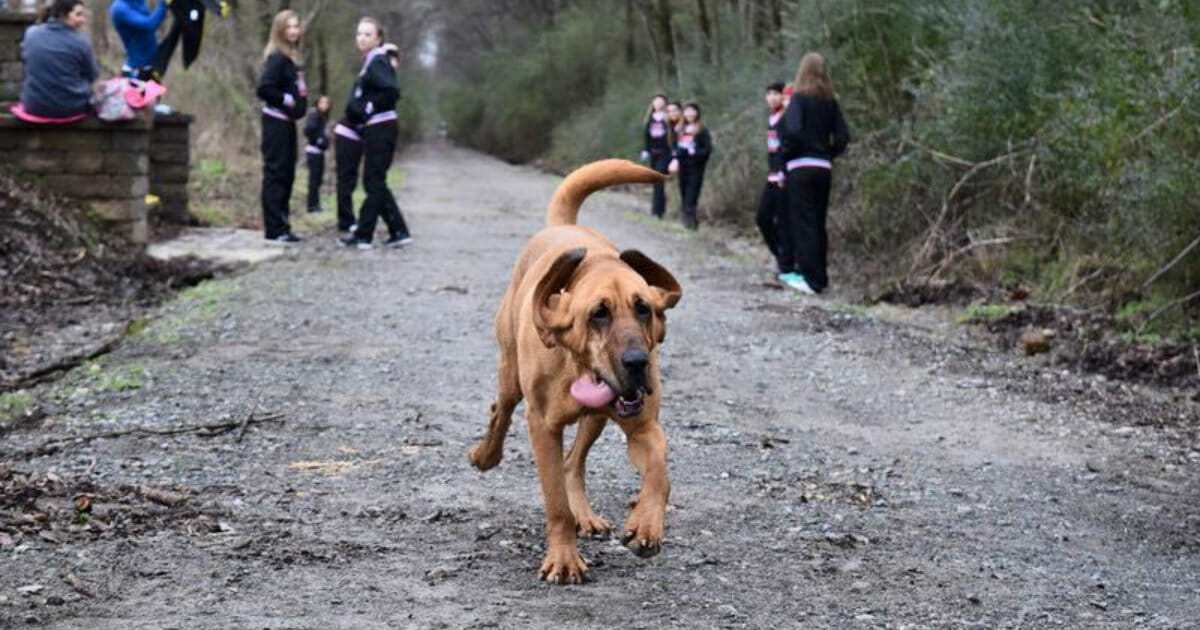 No dog owner wants their pet to get loose. A rambunctious dog out on its own can get into all sorts of hijinx.

So when one woman’s hound dog ran away from the house one morning, imagine her surprise when she found out what she’d been up to: competing in a marathon!

It’s the story of the most unlikely athlete, and how she dominated the competition without even realizing it.

It was January 19, 2016. April Hamlin, from Elkmont, Alabama, let her dog Ludivine, then two-and-a-half years old, out to use the bathroom.

Ludivine then snuck out from the house and ran off. This wasn’t unusual: Ludivine liked to explore, and the people in the neighborhood were used to seeing her on her own.

But on this morning, the Trackless Train Trek Half Marathon was kicking off nearby, and the dog happened to make her way to the starting line… and proceeded to run all 13 miles, much to the surprise of the other runners.

“I saw her for the first time in the parking lot before the race,” runner Tim Horvath told Runners World. “She came bouncing up, and I petted her on the head. I saw her collar, so I just figured she was somebody’s dog. Elkmont is a small town where everyone knows everybody, so it didn’t strike me as unusual.”

Horvath recalls seeing Ludivine throughout the race, holding her own against her human competitors… despite the many distractions and detours.

“Somewhere around mile 2 or maybe just a bit past, I saw Ludivine again,” he told Today. “She had stopped to eat some roadkill rabbit that was in the road. When I got close to her she picked up her head and started running again, near me. … [Later, she took] a detour and wade into a creek for a drink of water. Twice she stopped next to the trail for a potty break.”

“I wondered if she was going to get tired or go back to wherever her home was,” he told Runners World.

But Ludivine made it to the finish line… coming in 7th place overall, clocking in at 1:32:56. Despite not being a typical entrant, the race committee gave her a medal:

It was a big day for this dog… but his owner was still at home completely unaware.

As you can imagine, she was pretty surprised: “My first reaction was that I was embarrassed and worried that she had possibly gotten in the way of the other runners,” Hamlin said.

“All I did was open the door, and she ran the race on her own accord.”

It was all the more surprising, given how out-of-character it seemed for the dog: “She’s laid back and friendly, so I can’t believe she ran the whole half marathon because she’s actually really lazy.”

Which, honestly, makes this story all the more inspiring. If this lazy dog can get up and decide run a marathon, so can the rest of us!