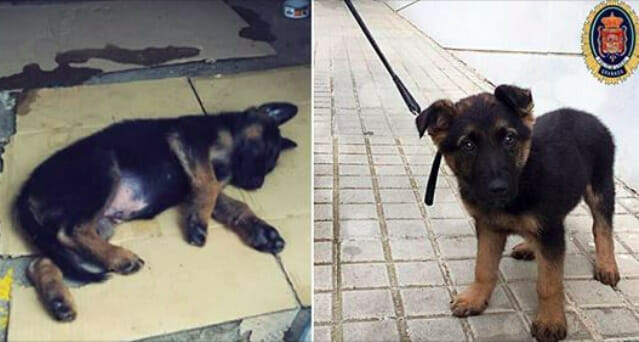 Spanish police have arrested an animal abuser in Granada, Spain, after he was suspected of kicking his puppy.

Fortunately, the puppy was promptly rescued by the police — who have now announced that they will adopt and train it to become a part of their squad team, the BBC writes.

The puppy, a German shepherd, was wounded and bruised severely in it stomach as a result of the kicks it sustained, BBC reports.

Fortunately, the puppy did not suffer any internal injuries. When the police arrived, the animal abuser was arrested and the young dog was sent to an animal hospital for treatment.

Not only did the police rescue the victimized dog and arrest its abuser — they decided to adopt it. The Granada-based department announced that it would train the German shepherd to join their team. The department has also issued a statement asking the public for their votes on what they should name this latest member of their team.

Suggestions are Rocky, Iron, Lucky and Stan Lee. At the time of writing, the latter proposal appeared to be ahead of the competition.

In this case, the dog would inherit the recently deceased superhero giant’s name. A very suitable name I think!

What a fantastic job of the Spanish police have done here. Not only did they rescue the dog from a cruel abuser, they’ve offered it such an exciting future! I am certain that this pup will become a most valuable member of their team — no matter what name he gets!

Watch the puppy below as he undergoes some basic training with the department.