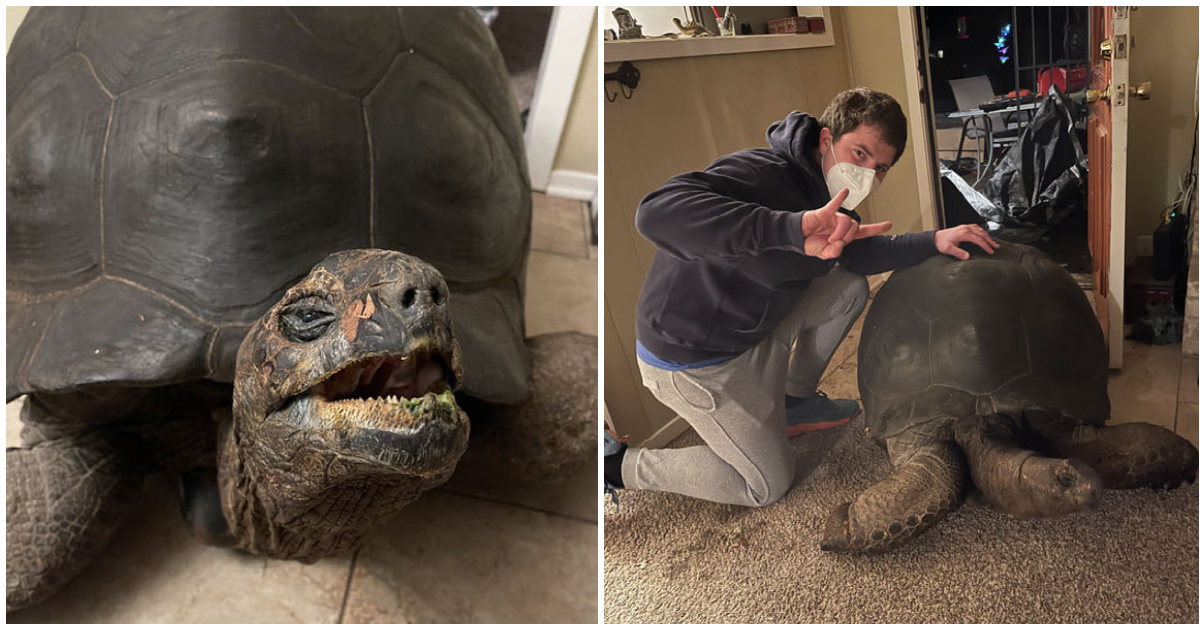 People in Texas have been dealing with a particularly harsh winter in recent weeks, as a historic arctic freeze has caused widespread outages of power and heat.

Sadly, this crisis has also taken a toll on animals. Sudden losses of power have left shelters and sanctuaries scrambling to relocate their animals, and several animals have died.

Luckily, there are also many people stepping up to help creatures in need, and recently one crisis was averted when two strangers stepped up to move a giant tortoise.

Vicki Boening, from Pflugerville, Texas, is known as “The Turtle Lady,” and has kept several tortoises in a heated and insulated shed in her backyard.

But as temperatures dropped to near-freezing levels, her electricity and back-up generator went out, according to FOX 7 Austin. Two of her female red-foot tortoises died in the ice storm.

Vicki had to relocate the surviving tortoises, which was no easy task — especially when it came to the 600-pound “Big Al.”

Luckily, she got help from some kindhearted strangers.

A local man named Austin Beck and his father-in-law went out to deliver firewood to neighbors without power, including Vicki.

But after the delivery, she had an unexpected request for them: help transporting her giant tortoise. The men agreed to help — although they underestimated the task ahead of them, and the size of Big Al.

“We headed over as quick as we can, thinking this should take 15 minutes max, as this thing couldn’t weigh more than 100-150 pounds,” Austin said in a Facebook post.

“I am not joking when I say it was like lifting a small car. It was every bit of 600 pounds.”

Despite the extra work, the men were a big help, using a tarp to get Big Al into Vicki’s home.

“We got Big Al and we took him into my bedroom,” Vicki told FOX 7. “I needed him as warm as possible. I gave him my electric blanket. Luckily, we had electricity back by then.”

Austin says that Vicki was extremely grateful for their help, and described the unusual call as “just another Texas story” from the ice storm.

“Everyone needs help in some way right now. Even tortoises,” he said.

However, Big Al isn’t out of the woods yet. He was described as “gravely ill,” and had to be transported to Capital of Texas Zoo for a serious upper respiratory infection.

It’s a reminder of how close this tortoise was to dying from the cold, and how important this act of kindness was. Sadly, several of his tortoise companions did not survive.

Now, a GoFundMe page has been set up to raise money to save Big Al. The page says that Vicki and her turtles have long been a staple of their community.

“Vicki and her turtles are beloved members of our town,” the page’s organizer wrote. “I spent my early adult life growing up alongside these turtles as she taught me to care for and appreciate animals. Today my children love to visit the turtles and The Turtle Lady. She is helping educate our next generation about the importance of loving, respecting, and caring for animals.”

You can donate to help Big Al on GoFundMe — they need plenty of help reaching their $20,000 fundraising goal. As this story proves, sometimes a random act of kindness can really save a life.

We hope Big Al makes a speedy recovery and Vicki is able to continue her work with turtles. Thank you to the men who helped Big Al!