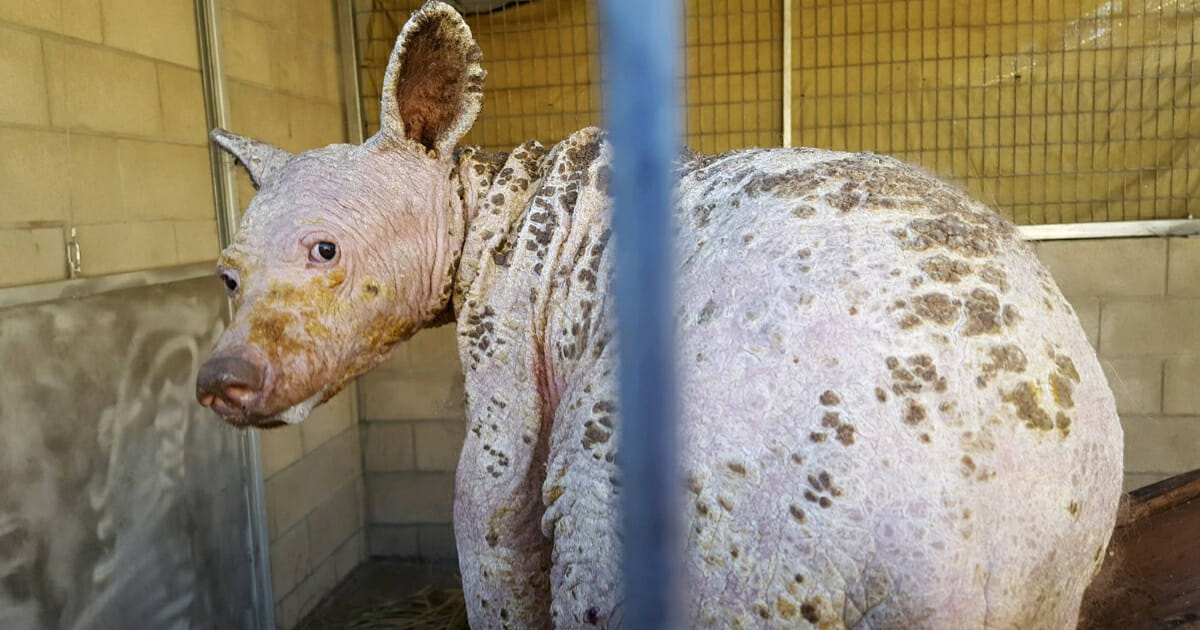 If I ask you to picture a bear in your mind’s eye, you’ll probably conjure a majestic beast covered in fur that dwarves most other carnivores on the planet.

Well, meet Eve. When she was first found, her rescuers didn’t even know she was a bear for sure. Hairless, pink, riddled with scabs and stripped of her dignity, it was difficult to discern that Eve was actually one of the proudest animals on the planet.

She was rescued from Placer County, California, by the CA Department of Fish and Wildlife on Christmas Eve 2017, and thus began her epic journey to recovery …

UPDATE: You probably remember Eve, the "bare bear" who was almost unrecognizable and suffering from severe mange when…

Posted by The Humane Society of the United States on Thursday, 27 December 2018

Dubbed “Eve” due to the day she was found, the young black bear was afforded a place at The Fund for Animals Wildlife Center. They quickly realized she was suffering from extensive mange and smaller than she was supposed to be (her lack of food had stunted her development).

Fortunately for Eve, she was given extensive treatment against the lice that were feasting on her skin, and regular baths started to restore her coat.

Cruising around run one of her new bear enclosure.

Posted by The Fund for Animals Wildlife Center on Tuesday, 13 February 2018

However, by April – some four months later – her progress still wasn’t what staff wanted it to be.

On Facebook the center wrote: “We did see fur regrowth on sections of her body during her last exam, but it is very sparse, overall. She does still have some crustiness on her cervical and upper thoracic spine area and oddly, that is where a lot of her fur growth is as well.

“She has taken to her pools and is frequently leaving the water when her caretakers approach; she leaves the surrounding area very wet from her splashing and playing!”

By July, however, the mange had all but gone, even if Eve continued to fight skin infections and required medication.

“There is no doubt, we all want her to be healthy and have the opportunity for a good quality of life,” the center then wrote. “Only time will tell us what tomorrow brings, but for now it is still our fervent wish that she is able to return to the wild one day.”

EVE UPDATE: We've been bringing you the story of Eve, a black bear, who was completely hairless and starving, but she's…

Posted by The Humane Society of the United States on Sunday, 30 December 2018

Eventually, the Wildfire Center came to the decision that it was best for Eve that she stayed living in captivity, as her lack of fur could have endangered her life. That, along with the California wildfires that ravaged the State at the back-end of last year, meant it wasn’t viable to release her.

However, all wasn’t bad for Eve. The center have started to raise funds to ensure she has her forever home. They said: “We have always been committed to Eve’s care and have always put her best interest foremost — just as we do now. We will continue our commitment and are in the initial stages of preparing Eve for a Forever Home at our sister animal sanctuary, Cleveland Amory Black Beauty Ranch in Texas.

“Eve will remain here in our care, while we work together to raise funds for a state of the art, large habitat that Eve can forever call home. We know it won’t be easy or inexpensive — it already costs us close to $500 every week just to care for her here — bears aren’t cheap house-guests; they’ll literally eat you out of house and home! :-)”

Posted by The Fund for Animals Wildlife Center on Monday, 24 December 2018

It’s thanks to a number of extremely kind people that Eve has been given a second chance in life. We think the transformation is truly something special!