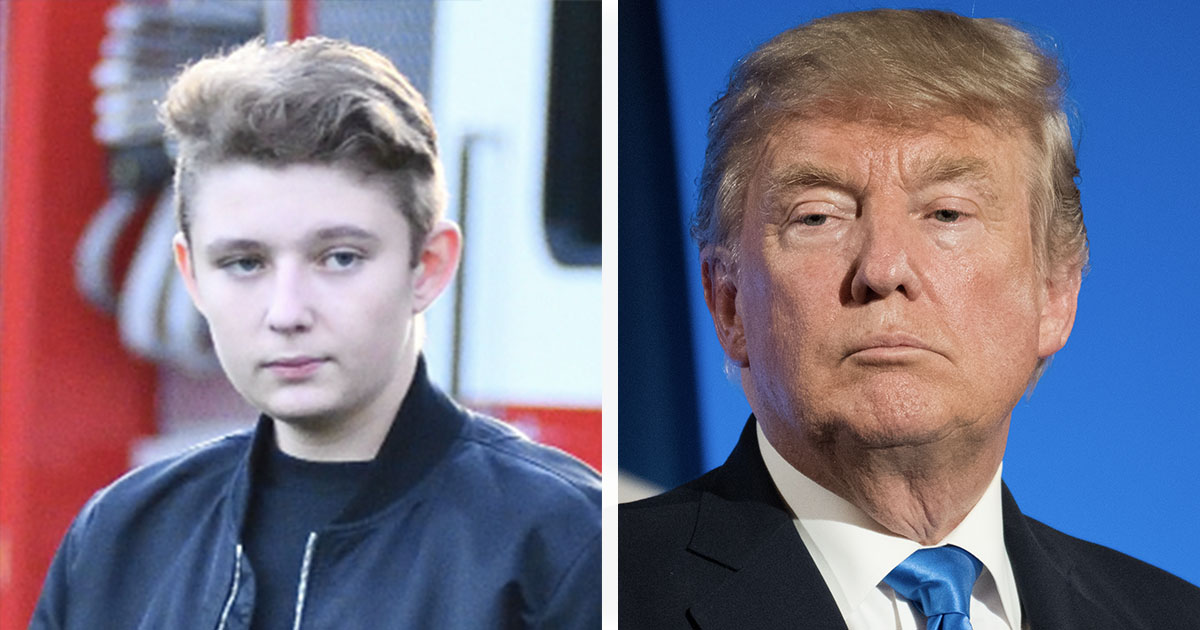 It’s been quiet around Donald Trump and his family following their departure from the White House in January. That also goes for his youngest son, Barron Trump, who has been seen just once in public.

Now, however, news on his future comes to light. And it appears that the Trump family plans to stay in Florida, where they’ve lived since January.

In a short announcement a spokesperson for the elite school Oxbridge Academy in Palm Beach announced that Barron Trump is enrolled as part of the class of 2024.

First, let’s take a look at Barron’s siblings. He has two half-brothers and two half-sisters from two of Donald Trump’s earlier marriages. Donald Jr. was born in 1977, Ivanka in 1981 and Eric arrived in 1984.

Donald Trump and ex-wife Ivana divorced in 1992, but it didn’t take long before the future – and now former – president was married again. One year later, in 1993, he married Marla Maples. Together, they had a daughter, Tiffany.

Following their divorce in 1999, Donald Trump would go on to be married once again. In 2006, he married Melania Trump.

Melania gave birth to son Barron that same year, and 10 years later, in 2016, Barron would become the first boy to live in the White House in over 50 years.

But we’ll get to that in a minute. Several of Donald’s children, including Ivanka, Eric and Donald Jr, have been involved in his presidency, working closely with their father and his staff.

They have found themselves in the spotlight, doing interviews, press conferences and appearances on television almost every night.

But 15-year-old Barron has been kept away from the searing gaze of the world. Instead, he’s been able to focus on his own life, with parents Donald and Melania wanting him to have the privacy every child is entitled to.

And now, it seams like he will continue on his upper class journey, with Barron to attend a very prestigious private school.

It will come as no surprise that Donald Trump’s net worth is truly staggering, and as a result, Barron grew up in a world of luxury.

Speaking with Parenting, mother Melania Trump revealed that Barron loved planes and helicopters as a young child. She always made sure to cook his breakfast, as well as prepare his lunch. Even though they had a very luxurious lifestyle, they didn’t have a traditional nanny.

“We keep it down to a minimum,” Trump added. “If you have too much help, you don’t get to know your children.”

All the same, Barron loves spending time with his dad. When Barron was growing up, Melania made sure that Barron got quality time with his father, and the two often went out for dinner together. As he grew older, Barron also joined his father on the golf course.

“It’s very important to know the person you’re with. And we know our roles,” Melania explained.

Melania Trump is of Slovenian descent. Because of that, she raised Barron to be bilingual, and when he calls his grandmother in Slovenia, he speaks Slovenian.

Both her and Donald Trump agree that the more languages you speak, the better. His father told Larry King that he “loves” that Barron speaks with a Slovenian accent. One can assume these days that the accent is gone, since he’s gone to school in the US.

“It’s Melania who wants to stay. She doesn’t want to take Barron out of school,” an unnamed source told the New York Daily News. “She’s concerned that he won’t have the same relationship with new teachers that he has at Columbia Prep.”

After finishing school in “The Big Apple”, Barron and Melania headed for the White House. Barron then became the first boy to live in the White House since JFK Jr.

Barack Obama, George W. Bush and Bill Clinton – the three most recent presidents – have been fathers to only girls. Other presidents since JFK have had sons, though they’ve all been adult and lived outside of the White House.

When Barron moved into the White House, he also became the first presidential child to attend St. Andrew’s Episcopal School in Potomac, Maryland. Every president’s child over the last 35 years has attended Sidwell Friends instead.

Melania praised the school for “its diverse community and commitment to academic excellence.” Since Joe Biden was elected,

Melania has been looking at new schools in Florida. It’s been speculated that – just as many other Trump family members – Barron will head to one of the more prestigious schools. And now, it’s been decided on where he will continue his high school education.

A spokesperson for the private school Oxbridge Academy has confirmed that Barron Trump will enroll at the high school, as part of the class of 2024.

For Barron, this will surely be a new beginning, and at the same time, it seems like there’s plenty to do on campus. According to The List, the school offers sports such as basketball, swimming, track & field, and golf. They even have a flight simulator at the school.

Furthermore, it also has clubs and different activities that students can participate in, such as the National Honor Society. Also, all students at the school are required to have an Apple laptop.

During Donald Trump’s presidency, Barron Trump wasn’t seen that often. He’s was mostly spotted traveling with his parents, boarding and leaving Air Force One or his father’s helicopter.

Oftentimes, those occasions have been in connection with the Trump family returning or leaving for their holiday trips to Mar-a-Lago in Florida. That’s also where Donald Trump and his family decided to travel following his last day in the White House.

Melania Trump was very clear throughout their time in the White House that she was keen on protecting her son from scrutiny, especially since being the president’s son can be a demanding thing.

In April of 2018, however, he had made a rare public appearance at the annual White House Egg Roll.

Being the son of the president means having your every move tracked. That’s why Melania Trump has been very keen on not letting Barron issue statements of his own.

A good example of that was in June of 2020, when a media controversy involving Food Network host John Hanson happened. At that point, it was Melania Trump’s spokeswoman Stephanie Grisham who responded on both her and Barron’s behalf.

Even though Barron Trump only just turned 15, he is reportedly already 6 feet 7 inches tall. Seeing him stand shoulder-to-shoulder with his 5-foot-11-inch mom Melania, he seems even taller!

The new picture was snapped in New York City as Barron and Melania left their Manhattan home at the Trump Tower.

Good luck in your new school, Barron! Would you like your child to attend a private school or not? Give us your thoughts in the comment section.