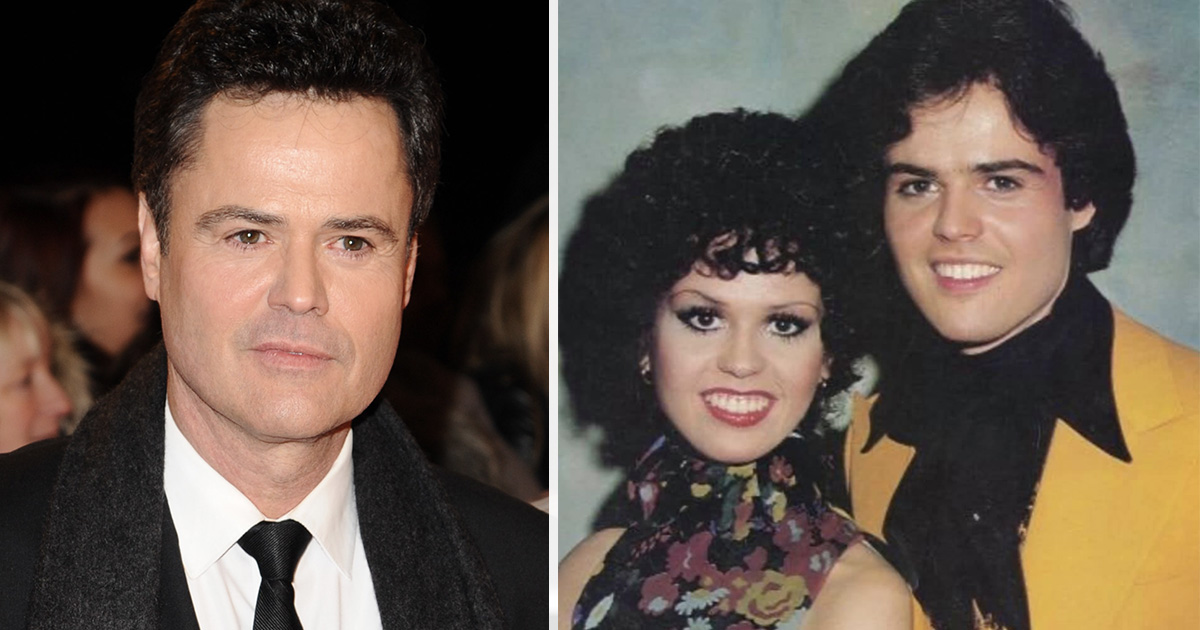 Donny Osmond and his siblings became icons in the 1970s. The Osmonds scored huge success, and alongside his sister Marie, Donny was a natural entertainer with his huge smile and great talent.

As a child, Danny Osmond became a celebrity. However, fame can also be a toxic thing. And for Donny, it was no different.

Donny Osmond was born on December 9, 1957, in Odgen, Utah. Right from the start he was an entertainer, performing alongside his older siblings as a part of the Osmond Brothers when he was just a young child.

His older siblings, Alan, Wayne Merrill and Jay were already entertainers by the time Donny was born, and had sung together for many years.

Soon Donny was added to the group – and the rest is pretty much history.

Donny was born as the seventh of nine children. His parents had always dreamed of having a large family and their home was very religious. Donny grew up with strict discipline, but plenty of music as well. Both his parents – Olive and George – were singers, and every Friday night, the whole family got together to sing, play saxophone and talk about things going on in the world.

At three years old, Donny and his family left Utah to pursue their big career in show business. The next destination was Hollywood, but the move wasn’t all great for Donny.

“It was kind of a traumatic day for me, he said. “It was kind of fun at first but then I got homesick for my sandbox, my truck. But it was a new life.”

At this point, Donny’s older siblings Alan, Wayne, Merrill and Jay had become a real attraction, performing as a child group. In 1962, they were recognized by Walt Disney and got a job at Disneyland, performing on the television show Walt Disney’s Wonderful World of Color.

At just 5 years of age, Donny Osmond entered the world of show business as well. At this point, the Osmond siblings found themselves singing and performing on The Andy Williams Show, and Donny also got his moment.

“I went from an innocent child to a national television star. My career took on a life of its own.”

What followed was a life as a huge celebrity, one that’s still being lived now.

Donny and his siblings were The Osmonds, performing in front of thousands of screaming fans all over the US and even in Europe. However, life on the road was hard on Donny, since he was just a little kid. He missed his toys, he was homesick and tired.

“It was a life of extremes,” he recalled. “On stage, twenty thousand girls screaming your name and then go to a silence hotel room.”

But Donny didn’t get much sympathy in his letters. His father George – who also was their manager – beat him and lectured him about not complaining.

“It’s easy to blame the parent,” Donny Osmond told The Guardian. “I got over that quickly and realized my father is not perfect but he did the best he could. He was very strict and all that, but you have to remember that he was an army sergeant who was raised by an abusive stepfather and he was kicked out of the house when he was in his teens.”

“When you look at his background, the man is a hero,” Osmond added. “Especially keeping nine children together in the world of show business. He really did it right, in my opinion. He disciplined us the best way he possibly could.”

With Donny at the helm, The Osmonds became teen idols, and at their peak between 1971 and 1975, they couldn’t go anywhere without crowds of screaming teenagers chasing after them.

What followed was something commonly known at the time as “Osmondmania.” The siblings were always at the top of the music charts, constantly on tour, and even had their own cartoon.

By 1976, the Osmonds were no longer producing hit singles, but had already produced 16 albums. Alongside the successful all-boy group was another Osmond making her way in the music industry.

When their only sister, Marie Osmond, became Donny’s duet partner, a new popularity emerged, one that would catapult this young brother-and-sister-duo to international stardom.

In 1976, the two Osmonds had transitioned into television thanks to the rise of variety show “Donny & Marie.”

The show was hugely successful, airing around the world, and was full of special guests and hit Osmond songs. Behind the scenes, though, the siblings’ success came with a price.

Donny and Marie Osmond were just teenagers when the show started in 1975. With part of the show’s attraction being teen heartthrob Donny, still a bachelor, the pressure on Marie to look good by his side was huge.

Marie Osmond was the only girl in the Osmond family and rarely sang with her brothers at the height of their fame. She enjoyed her own successful solo career as a country music star in the 1970s and 1980s.

When she joined her brother on the TV show “Donny & Marie”, it was an instant success, but behind the scenes Marie was under huge pressure to look good.

It was all smiles in front of the camera as the dynamic duo interviewed celebrity guests and performed numerous hits, but Marie faced pressure all too familiar to many women in the public eye.

“I had producers take me out into the parking lot when I was 103 pounds and tell me that I was obese, disgusting and a disgrace to my family,” Marie told Closer in 2015.

“They said that I needed to keep food out of my fat face.”

The despicable treatment she received stayed with Marie.

“This sent me on a head trip – that 250 people could lose their jobs because of me,” she said, adding that food became her enemy at the time.

Donny Osmond had, just like his siblings, been a star since he was very, very young. But fame soon became something he didn’t like, describing it like self-hatred.

“Knowing what I know now and what I have been through, would I do it the same?” he told Daily Mail. “I look at the alternative – a very simple life. It would have been nice to have a simple life.”

Together, Donny & Marie reached ridiculous levels of fame. It came to the absurd point that even their organs were going to be of public interest.

Donny explained that he was rushed to the hospital in great pain following a show wherein he had developed abdominal pains. Once there, he underwent surgery, but it didn’t take long before he was back on track.

When Donny woke up from surgery, a photographer from a magazine was in the room.

“The photographer said: ‘We need to get some pictures of you, Donny’,’ he recalls. “‘Look like you’re in pain’.”

Donny complied, but years later he thought of how idiotic and stupid it was. He said that he almost lost his life.

“At the time, I did what they needed me to do because I realized millions of girls were going to read Tiger Beat [magazine] and I had to put on a good show. The harder you worked, the bigger star you became. At least that’s what I thought,” Donny Osmond explained.

By 1978, the success of Donny and Marie’s TV show had waned due to rumors that Donny was dating and therefore not available on the market. In actual fact, he was dating Debra Glen, with the two tying the knot in 1978. Together, they have five sons and 12 grandchildren.

Marie, meanwhile, opted to focus on her own thing, and the same went for Donny. He went back to working on his music career, and while his brothers focused on country music, he revived his career in popular music, though this time for a more adult audience.

Marie and Donny have grown up in front of the cameras, first appearing when they were 4 and 5 years old, and it’s clear that what they were exposed to as impressionable youngsters has stayed with them.

But even though he’s been a celebrity his whole life, it seems like Donny never lost his work ethic.

However, speaking in a 2009 interview with the Daily Mail, Donny admitted it didn’t always help with personal commitments.

The COVID-19 pandemic has been rough on people all over the world, having to stay in quarantine, not being able to meet friends and family, etc. For many, it has also meant losing their jobs and not being able to support their families.

The same goes for the people in show business, especially those like Donny Osmond, who loves playing in front of a live audience.

In January, however, he had the great joy of welcoming his 12th grandchild to the world after his eldest son, Don Jr., and his wife, Jessi, had their fourth baby.

Growing up in the music industry in the 1970s sure wasn’t an easy thing. And for Donny Osmond, being a star from age 3 was really something else. It meant sacrificing many things, above all else a normal life.

Brings smile to his face

Even though it’s been a rough ride, Donny Osmond is blessed with a truly special gift. He’s had many highs and lows throughout his lives, but the most important thing for Donny is family.

It has helped him, and his siblings, get through anything.

“I look back at my life as all these peaks and valleys, and Donny & Marie happens to be a peak,” he told Closer in 2015.

“The bad times dissipate and you only remember the good. When I see those old clips, sometimes I cringe, but it still brings a nice big smile to my face.”

While on stage, it might look like every celebrity – no matter what the profession – is doing amazingly well. However, you will never fully understand how their lives really are, and therefore, we’re so happy that Donny Osmond and his sister have the courage to tell the world exactly how they feel.