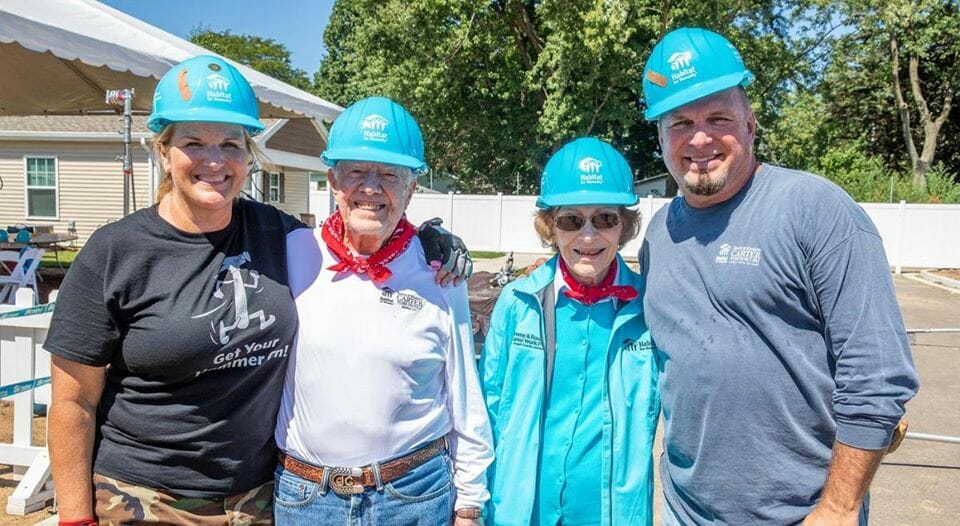 At 95 years old, Jimmy Carter is the oldest US president ever, but he’s still going strong.

In the decades since leaving office, he has been working tirelessly to help others, most famously through his work for the charity Habitat for Humanity.

Nothing can stop him from helping to construct homes for people in need, not old age or even breaking his hip. His efforts continue to inspire others to volunteer their time… including other celebrities, like country superstar Garth Brooks.

Brooks, 58, has worked with the former president on many builds, and he says it’s not just for appearances: even past 90, Carter still gives it his all and is the hardest worker you’ll find.

After seeing Carter return to the job after his hip surgery, Brooks went even further with his praise, saying that the Jimmy Carter and his wife Rosalynn were heroes that anyone can admire, regardless of political affiliation.

“What the Carters stand for is what we should all shoot for as human beings. Please forget ‘Republican’ or ‘Democrat.’ What they are standing for is as human beings,” Brooks said, saying he believes none of that division matters “when you get to heaven.”

“If we’re going to get anywhere as a human race, this is the path we want to follow. So anything keeping any kind of light on that path and those two people’s dreams, then count us in.”

Brooks also said that doing good and working together for a charity is a way to transcend all kinds of divisions.

“You don’t care who’s on the other end of that board that’s helping you carry it,” he told Yahoo. “You don’t care the color of their skin, their sexual preference, their religious preference. It doesn’t matter. You’re all here to build a house for someone who needs it.”

We agree with Garth Brooks—it’s always inspiring to see the Carters continuing to work with Habitat for Humanity.

Thank you to all these legends for giving back with their charity work! Share this inspiring story!