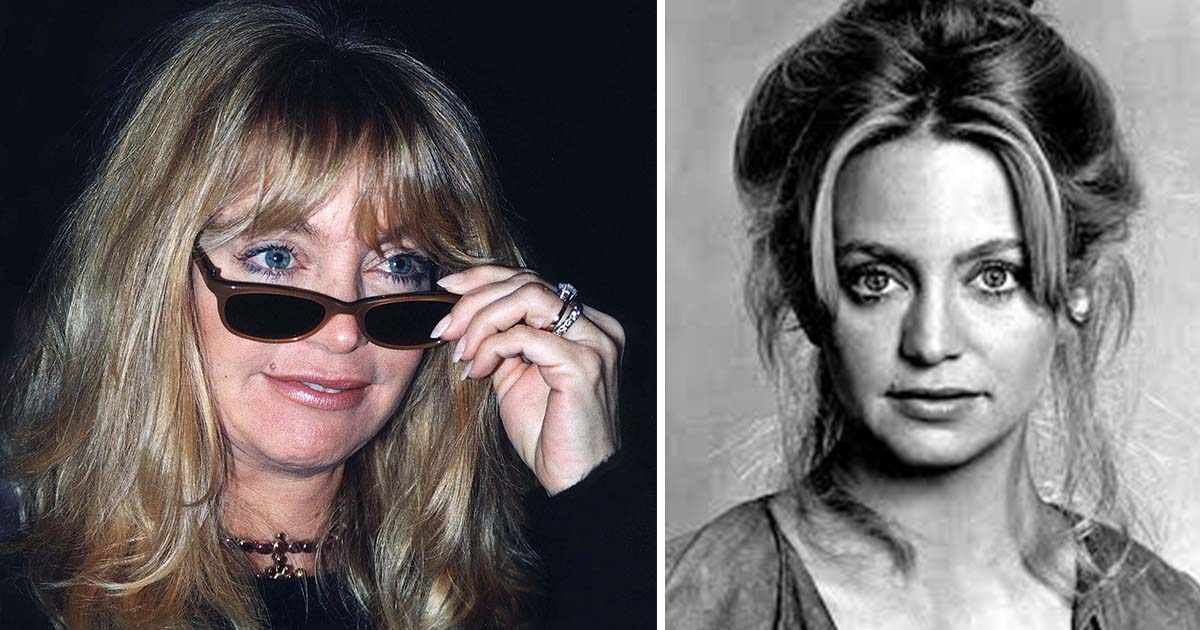 Most of us probably have a pretty lop-sided attitude when it comes to painting a picture of Hollywood and celebrities. I’m the first to admit that I sometimes style myself on these celebrities.

That in itself isn’t strange perhaps; we humans have a tendency to imitate each other when it comes to clothes, interests and appearance.

Celebrities are often seen as perfect beauties without any flaws or errors. They always look great when we see them on film, and whether it be on the red carpet, in a photoshoot or on the streets, they just have this flawless air.

But every now and then we get sneak peek into what celebrities really look like – without the make up and the flattering lights and the fancy clothes. We’ve seen several such examples in recent years and it’s only then that we realize, thankfully, that celebrities are also just completely normal people and not super-humans.

Goldie Hawn, 74, has always been one of my absolute favorite actresses. Her infectious smile, wonderful charm and talent have captivated millions of people over the years. Few are able do it – but Goldie has managed to maintain her movie star status and popularity for over three decades.

Ever since her breakthrough, Goldie has been praised for her natural looks and her golden, blonde hair. In April 2020, Goldie was on the front cover when People Magazine’s “Beautiful Issue” celebrated 30 years.

Today, the peace-loving blonde serves as a true role model of inner beauty – Goldie is a confident and strong woman who has aged with dignity.

But that wasn’t always the case.

”You know, when I was younger I was flat chested, I was coming in to my hormones so my face was all over the place, I was awkward. I wasn’t asked out by boys and I didn’t think anybody would ever love me. It’s the hardest time for a girl to feel good about herself – and often times the girls who do feel good about themselves are the early developers,” she told Beauty Heaven.

As Goldie became more and more famous and got bigger roles in movies, she quickly learned to accept herself. There were many critics who had all sorts of opinions about her – which forced Goldie to find her inner strength.

Otherwise, people’s opinions would have eaten her up.

Goldie Hawn no make up photo

”Some people think that you’re beautiful; some people think you’re ugly. They voice a lot of opinions, so you then have to become resilient to it – and to do that you have to learn and to understand who you are and what you really think about yourself. And that’s where I think I learnt about my inner beauty,” she says.

A few years ago, the Award winning actress appeared in public without make-up, in broad daylight. Many people reacted to the photo because Goldie didn’t look anything near the actress we have become accustomed to over the years. Without make up, she looked almost unrecognizable (yet the paparazzi managed to catch her)

At the same time, many also praised her natural look and I can only applaud her for her carefree attitude. And just because Goldie doesn’t wear ten coats of makeup when she goes out doesn’t mean that she’s not taking care of her skin and face.

”One of the most important things of all is sleep. Getting enough sleep is so important – as are things like ingesting good oils, making sure you keep your face soft by removing dead skin, and using sun guard every day. I also take the time to really massage my creams into my face,” Goldie says.

In an interview with Pop Sugar, Goldie revealed that she ingests two tablespoons of olive oil before bed and massages her face.

“The skin is our biggest organ, and as you get older, you get drier”, she said.

In the very much appearance-fixated entertainment industry, Goldie has often had to answer questions about her figure, her skin, her femininity and her appearance. Over the years, many celebrities have tried to use their platforms to problematize age discrimination in Hollywood.

Julia Roberts, Nicole Kidman and Jennifer Aniston, Helen Mirren – all of these greats have slammed age discrimination in Hollywood and demanded a change. But Goldie has a slightly different view of the discussion and she wants to take a different path to change things.

Hollywood romances aren’t known to last very long. Celebrity relationships and marriages come and go all the time. But clearly no one told that to Kurt Russell and Goldie Hawn — the actors are still in love after nearly four decades together.

The two starred in some films together in the ’80s, including the romantic comedy Overboard, but they rarely appear on screen together.

Kurt remains an in-demand actor, appearing in films like Once Upon a Time in Hollywood and the Fast and the Furious franchise. Goldie has largely retired from the screen. However, the two reunited on screen, playing Santa Claus and Mrs. Claus in The Christmas Chronicles. A sequel is in production, and the two are slated to reprise their roles.

I absolutely love Goldie! A genuine funny wonderful lady and a brilliant actress!