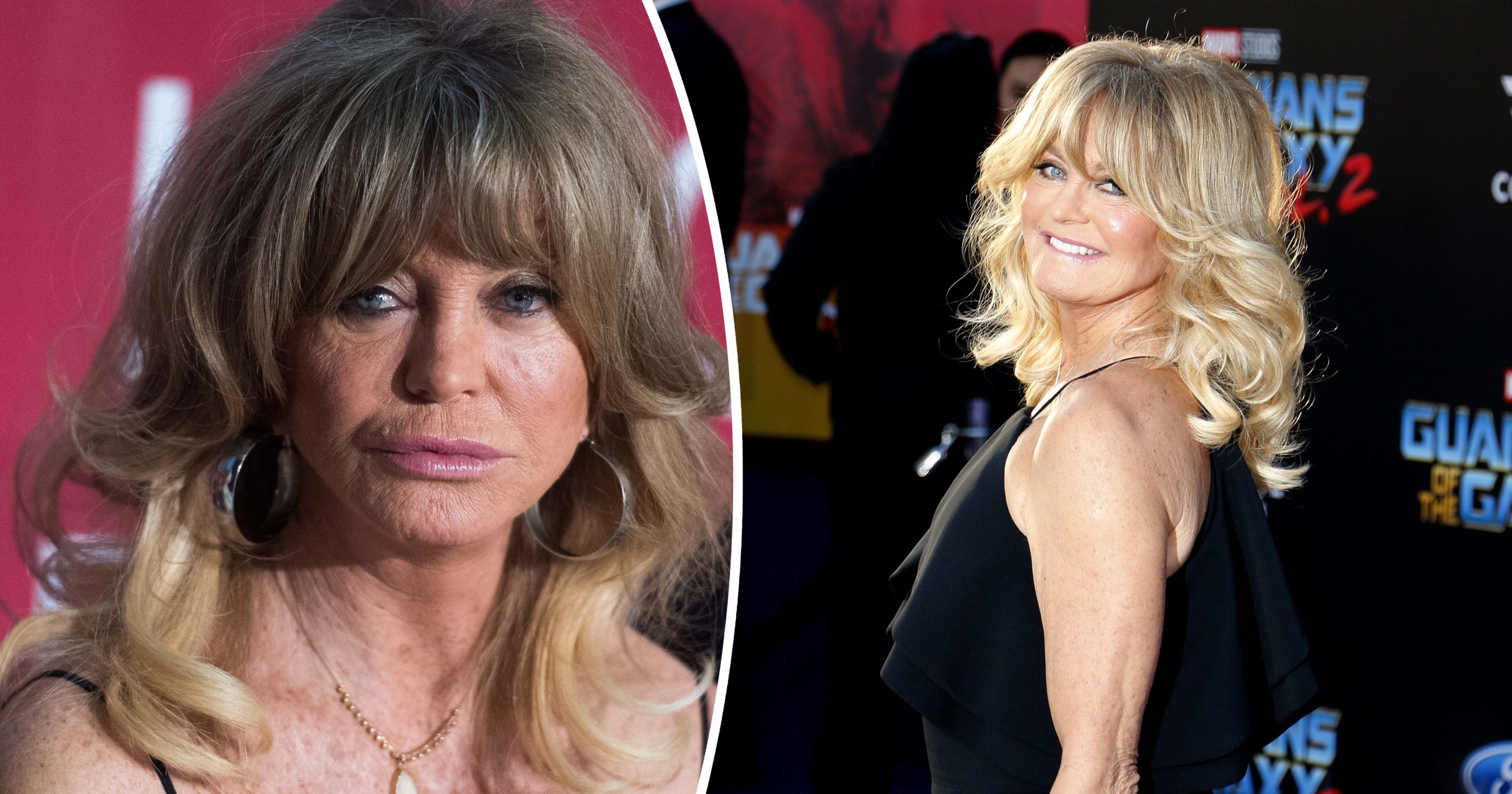 Goldie Hawn rose to become one of the biggest stars in Hollywood – and has held that status for decades now. One could say that she was pretty much born into show business, and still, to this day, the beloved actress is working hard to entertain.

Hawn’s been through a lot, both on her own and alongside partner Kurt Russell. Last year, she revealed the struggles she faced during her childhood.

Now, the beloved actress has opened up again on her health struggles.

Goldie Hawn was born November 21, 1945, in Washington DC, and raised in Takoma Park, Maryland, by her mother, Laura Hawn, and her father, Rut.

By age three, Goldie had began her journey toward a career in entertainment. Her mother had a dance school where Hawn began taking ballet and tap dancing lessons. At age 10, she performed in the Ballett Russe de Monte Carlo production of The Nutcracker – 19 years later, she ran and instructed a ballet school herself.

All in all, Goldie Hawn had a great childhood. But at the same time, however, she encountered struggles at a young age. She previously recalled an emotional childhood struggle she had involving her teacher. Moreover, her mental health declined as she became more famous and was recognized everywhere.

Being a celebrity is often viewed as an enjoyable profession. Stars get to do films and stunts, spend time on big sets, travel around the globe, and make significant money. They also get to attend no end of glamorous events and award ceremonies, and are largely recognized wherever they go.

But being famous also entails putting a great deal of pressure on oneself. Some assume that celebs are always the happy and ‘perfect’ people they see on screen. Realistically speaking, of course, we all have bad days.

The pressure of performing and always being available for fans and the press will eventually take its toll on anyone. For Goldie Hawn, that became a big issue.

Mental health problems have become an increasingly significant issue in Hollywood. These days, people actively speak out on it, but before it was attached to a definite and dangerous stigma.

Last year, Goldie Hawn decided to openly discuss the subject. When her career took off at 21, one would have assumed she was the happiest person in the world.

But in truth, she struggled with depression – and didn’t even go out in public. Speaking on the talk show Good Morning Britain, Hawn revealed that her mental health struggles started in her early 20s.

“When I was young, I became depressed. I was 21 and I was rising to success,” she said. “I know it sounds terrible, but it’s a very, very difficult thing, I didn’t necessarily want that.”

Many dream about becoming a celebrity, but that wasn’t the case for Hawn. She had gotten her big breakthrough, but instead of wanting more, she just wanted to get away from everything and everyone.

“This is something that, for me, I worked through. I went to a doctor, I went to a psychologist, I learned about quieting my mind and what happens to the brain.”

Many have praised Goldie for discussing her mental health. Fortunately, she has no plans to stop doing it.

In a video to promote her appearance at her mental health organization MindUp’s event, Goldie spoke candidly about how she – despite her immense success as an actress – wasn’t happy and wanted a “normal life.”

“I wanted to go home, get married, open a dancing school, be happy, have children – I wanted a normal life and it’s not exactly what I was getting,” Goldie Hawn said, as reported by Hello. She was 24 at the time.

“My career just went boom, boom, boom and I got an Academy Award. As wonderful as it sounded, I would go back into my dressing room and lie down, and I was really freaked out about this anxiety coming over me again.”

Following the candid video, fans sent their love and plenty of messages of support.

Praised for speaking out

“Thank you for sharing this. It made my heart happy! You are an inspiration to us all. Such a beautiful lady you are Goldie. God bless you & your beautiful family,” one person replied.

“Thank you so much for sharing this @goldiehawn and you’re an inspiration!!” a second said.

“This made me cry, Goldie Hawn you are amazing!” a third stated.

As Hawn’s career continued to develop – as a result, she became even more famous – she devoted more time to helping others.

For years, Hawn has helped others try and understand the importance of good mental health and how one can improve it. She’s focused primarily on children through her mental health organization MindUp.

MindUp provides material for both teachers and families to help children understand how they feel. During the COVID-19 pandemic, Hawn says this was very important.

“When this pandemic happened, it gobsmacked everyone,” Hawn said on Good Morning Britain. “We didn’t know how to handle our children, we were dealing with ourselves. It’s just a plethora of problems.”

Moreover, Hawn urged children, teachers, and families to get help if they saw warning signs of impaired mental health in those around them.

“For every one of us, we may have a different reason why we may feel low, or anxious, or depressed,” she said. “All I want to say is that if you really aren’t happy, we do need to be able to tend to ourselves, to go to a doctor. Don’t be embarrassed.”

On Mental Health Day, Goldie further spoke out, pleading that those with mental health issues speak up.

“And I think it’s really important to know that it’s okay to befriend someone, to notice they’re not well,” Goldie added. “To let them speak about it, that it’s not anything to be embarrassed about.”

It makes sense, then, to assume that Goldie has taken the time to look after not just her physical health, but her mental health as well. Many thought her 15-year pause from Hollywood would last forever. As it turned out, though, she just needed a break.

The 76-year-old always has a positive outlook on life, which has made her existence so much better. In fact, she even feels younger by just having positive thoughts.

“Youth is connected to the ability to see things new for the first time,” she once said. “If your eyes still look at life with wonder, then you will [feel] young!”

For Hawn and her family – including husband Kurt Russell – exercise and eating healthy has always been important. So in the last decade, Goldie Hawn has made sure to take care of her body, focusing on a specific diet and workout schedule.

“She always says you’re as young as you feel, and she still feels like a 30-year-old. She’s healthy and vibrant and comfortable in her own skin,” a person close to Goldie told Closer.

“[Goldie is] doubling down on working out. She’s never really just committing to one solid routine. Her big word is ‘diversity.’ Every day is different so she never gets bored of her workouts,” another source close to her said.

Pictures over the last years have also shown Goldie and her husband, Kurt, frequently out walking or biking together.

“I try to have as much fun as possible”

So how does Goldie do it? According to the actress, there is “no secret” at all to her well-being.

“And I drink my green juice every day! I do a lot of juice, I don’t put a lot of food in my stomach and I don’t mix my foods too much. So if I want to have like protein I’ll just eat a bowl of lentils, I won’t mix it with a bunch of stuff.”

“I don’t have [a secret], I really don’t. I try to drink my juices, I try to work out every day a little bit, I find moments in the day.

Goldie added: “I have short meditation spurts during the day, if I don’t have a long one in the morning, which sometimes the phone rings and you’re off and running, but I do find time to get quiet. I hike, I bike, I try to have as much fun as possible.”

Goldie Hawn is a true inspiration and deserves to be praised for her work and mental health. So please, share this article on Facebook if you like Goldie Hawn!