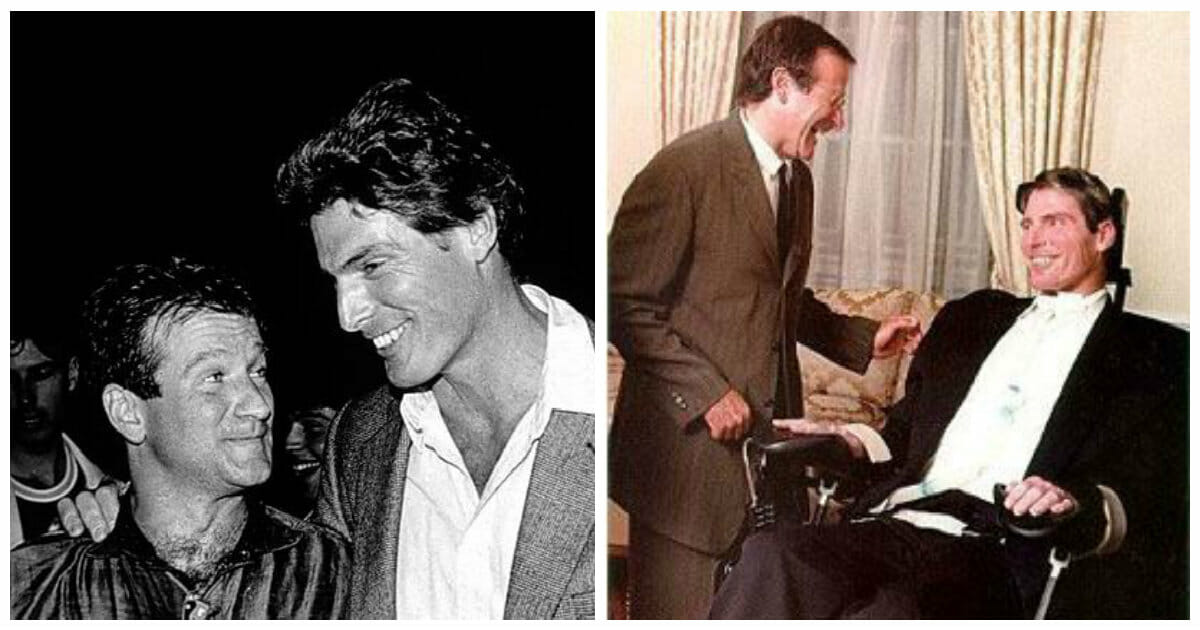 We are still missing the great Robin Williams, the comedic genius who committed suicide on August 11 2014. Fans around the world revered his talent through his classic roles in films like Good Morning Vietnam, Mrs. Doubtfire and Aladdin.

But those who knew him in real life saw that he was just as funny off-camera—and that he could use his gift to bring joy to people when they needed him most.

Five years after his death, here’s a story that shows what kind of person Robin Williams was, and how sometimes laughter really can be the best medicine.

One of Williams’ closest friends in Hollywood was actor Christopher Reeve, best known for the iconic role of Superman in the original film series. But the two had met before they were famous: while roommates at Julliard, they formed an unlikely, opposites-attract friendship.

“We were totally opposite,” Williams said, according to Biography. “He used to be the studly studly of all studlies, and I was the little fool ferret boy.”

Before their breakout roles, they made a pact to help each other out if either of them became famous.

But both of them found success on their own. By the late ’70s, Reeve was Superman, and Williams had his breakout role as Mork on Mork and Mindy, propelling both into the Hollywood limelight.

The two remained close throughout the following decades. Reeve would fly the two on weekend trips on his plane, and became the godfather of Williams’ son Zachary.

But in 1995, Reeve suffered a severe horse riding accident. He fell off his horse, landing on his head fracturing his vertebrae. The accident left him paralyzed from the neck down. Doctors were uncertain if he would survive.

While Reeve was in the hospital days after the accident, waiting to undergo a drastic surgery, he suddenly had a very unusual visitor. A doctor came in, speaking in a strange Russian accent.

“He announced that he was a proctologist and had to examine me immediately,” Reeve recalled in his autobiography. He was confused… then suddenly realized that it was actually Williams, dressed as a doctor wearing a rubber glove, surprising him with his routine.

While most people would’ve been serious at a time like that, the comedian knew that his friend could probably use a smile. “For the first time since the accident, I laughed,” Reeve recalled.

That simple joke had a profound effect on Reeve as he dealt with the aftermath of the accident.

Dad later said, ‘My old friend had helped me know that somehow I was going to be okay,'” Reeve’s family recalled. “Robin and his incredible family stayed by our side for the rest of Dad’s life, and long after that as well.”

Reeve was left quadriplegic, but kept moving forward, founding the Christopher & Dana Reeve Foundation, raising money to find treatments and cures for paralysis. Williams was a member of the board.

Reeve died in 2004 at age 52. “The world has lost a tremendous activist and artist and an inspiration for people worldwide,” Williams said in a statement at the time. “I have lost a great friend.” The work of the Reeve Foundation continues to this day.

Williams died ten years later. The actor committed suicide in 2004, attributed to depression related to his Lewy body dementia. But his legacy lives on, and the story of his visit to Reeve is a reminder that Williams, like his characters in Good Morning Vietnam or Patch Adams, knew the power of laughter.

“Robin’s unparalleled legacy on screen will last through the ages,” the Christopher Reeve Foundation wrote after his death. “But beyond the gift of laughter, he gave our family and the Reeve Foundation the gift of his simple, steadfast friendship. It’s a gift we’ll treasure forever.

Remember the incredible legacy of these two icons. Share this heartwarming story!